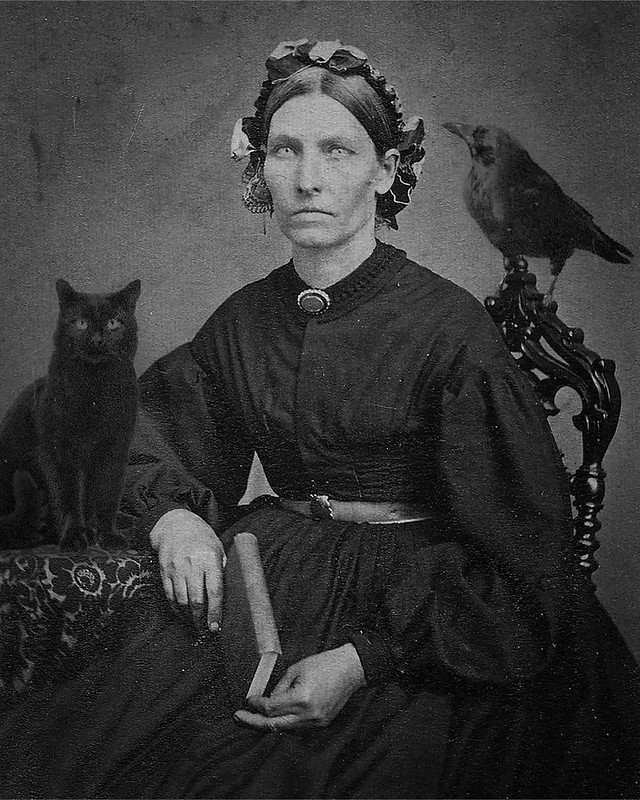 Familiars are in folklore, low-ranking Demons in constant attention to witches for the purpose of carrying out spells and bewitchments. Familiars usually assumed animal forms — CATS, TOADS, OWLS, mice and dogs were the most common — though virtually any animal or insect could be suspected. In witchcraft trials, if so much as a fly buzzed in the window while a witch was being questioned or tried, it was said to be her familiar. The inquisitors took the Bible to heart: those who had familiars were an abomination unto the Lord” (Deut. 23:10-12) and should be “put to death: they shall stone them with stones: their blood shall be upon them” (Lev. 20:27).

Familiars — also called imps — were said to be given to witches by the Devil or bought or inherited from other witches. A witch could have several of them. Cats were the favoured forms, especially black ones. The fear that all cats were witches’ familiars was one of the reasons for cat massacres that swept through medieval Europe.

Familiars were given names like any household pets, which most of them undoubtedly were. One 16th-century Essex woman accused of witchcraft admitted that she had three familiars in the form of mice: Littleman, Prettyman and Daynty. Another had four mice named Prickeare, James, Robyn and Sparrow. Elizabeth Clark, the first victim of Matthew Hopkins, England’s great witch-hunter of the 17th century, confessed to having five familiars, including unearthly ones: Holt, a kitten; Jamara, a fat, legless spaniel; Sack and Sugar, a black rabbit; Newes, a polecat; and Vinegar Tom, a long-legged, greyhoundlike creature with an ox’s head and broad eyes, which could turn itself into a headless four-year-old child.

Other familiars named in trials included Grizel, Greedigut, Peck in the Crown and Elemauzer. Perhaps the best-known familiar name is Pyewackett, the monicker of the witch’s cat in the movie Bell, Book and Candle, and a name that dates to Renaissance England. Pyewackett, Hopkins stated, was a name “no mortal could invent.”

Witches were said to take great care of their familiars. As Emile Grillot de Givry described in Witchcraft, Magic and Alchemy (1931) “they baptized their toads, dressed them in black velvet, put little bells on their paws and made them dance.” Familiars were dispatched to bewitch people and animals into sickness and death. They also protected their witches. In return, witches gave them what they craved: blood. Alice Kyteler of Kilkenny, Ireland, convicted as a witch in 1324, confessed (or perhaps was made to confess) that she sacrificed red COCKS to her familiar. It was believed that witches allowed familiars to suck blood from their fingers or any protuberance or unnatural spot on the skin. The existence of witch’s marks was proof of suckling familiars and therefore of being a witch — enough evidence to get witches hanged.

Familiars also were said to assume more than one shape. Agnes Waterhouse, an Englishwoman accused of witchcraft in 1566, had a cat familiar named Satan that could change into a dog (see metamorphosis). Familiars also could vanish at will. It should be noted that the appearance of the Devil himself as an animal was not the same as the appearance of a familiar.

If a witch was arrested, she was often tied up and left in a cell, while inquisitors watched secretly to see if her familiars came to her aid. Even an ant or cockroach crawling toward her was called a familiar.

Religion was a charm against the familiar’s infernal power. Waterhouse was said to be unable to harm one man through her familiar cat because of his religious beliefs.

During the witch hysteria, the obsession with familiars was most prevalent in England and Scotland, where they are mentioned in numerous trial records, especially those related to Hopkins. The Witchcraft Act of 1604 made it a felony to “consult, covenant with, entertain, employ, feed, or reward any evil and wicked spirit to or for any intent or purpose.” But the Malleus Maleficarum (1486), the major witch inquisitor’s handbook, offers no instructions concerning familiars in the interrogation and trial of witches. The book does acknowledge that an animal familiar “always works with her [witch] in everything.” It also advises inquisitors never to leave witch prisoners unattended, because the Devil “will cause her to kill herself.” The Devil might accomplish that through a familiar.

There is scant evidence of familiars in early American witch trials. In the Salem trials in 1692, John Bradstreet was indicted for “inciting a dog to afflict.” The dog was tried and hanged as a witch (see Salem Witches).

Outside of witch trials, more benevolent familiars were believed to exist, serving wizards and wise men and women who were magicians or village healers. The familiars helped diagnose illnesses and the sources of bewitchment and were used for divining and finding lost objects and treasures. Magicians conjured them with rituals, then locked them in bottles, rings and STONES. They sometimes sold them as charms, claiming the spirits would ensure success in gambling, love, business or whatever the customer wanted. This sort of familiar technically was not illegal; England’s Witchcraft Act of 1604 specifically prohibited only evil and wicked spirits.

Some familiars were said to be fairies. Oberon was a popular name for fairy familiars in 15th- and 16th-century England.

Many modern witches have animal familiars, usually cats, which are their magical helpers. Some also have dogs, birds, snakes or toads. Witches do not believe the familiars are “Demons” or spirits in animal form but simply animals whose psychic attunement makes them ideal partners in Magic. Some Witches say it is possible to endow pets with magical powers and turn them into familiars, though others don’t believe it should be done. Still others believe familiars are never pets (and should not be treated as such) but are animals who volunteer to work as familiars and are karmically attracted to Witches. Witches who do not have familiars send out psychic “calls” to draw in the right animal.

Familiars reputedly are sensitive to psychic vibrations and power and are welcome partners inside the Magic CIRCLE for the raising of power, the casting of spells, Scrying, spirit contact and other magical work. They also serve as psychic radar, reacting visibly to the presence of any negative or evil energy, whether it be an unseen force or a person who dabbles in the wrong kind of magic. Familiars are given psychic protection by their Witches.

Some Witches also use the term familiar to describe thought-forms created magically and empowered to carry out a certain task on the astral plane.

FAMILIARS IN SORCERY AND SHAMANISM

Sorcerers and shamans around the world have helpers in the form of spirits (see Sorcery; shamanism). Dispatching them on errands to harm or kill is called sending. The physical shape of a familiar varies. New Guinea sorcerers rely on snakes and crocodiles, while in Malaya, the familiar is usually an owl or badger passed down from generation to generation.

In Africa, the wild creatures of the bush are said to be witches’ familiars: for the Lugbara, they are the toad, snake, lizard, water frog, bat, owl, leopard, jackal and a type of monkey that screeches in the night; for the Dinka, they are black cobras and hyenas. The Zulus’ familiars are said to be corpses dug up and reanimated with magic; they are sent out on night errands to scare travellers with their shrieking and pranks. The Ndembu of Zambia believe that evil men create spirit familiars out of the blood of their victims and send them out to kill others. The Pondo witches, also of Africa, are women who are said to have sex with their light-coloured spirit familiars (see African witchcraft).

In shamanism, a novice shaman acquires his familiar, or totem, spirits, usually manifested in animal, reptile or bird, shapes, when he completes his initiation. He may send them out to do battle in his place, but if they die, so does the shaman. Familiars usually stay with their shaman until death, then disappear. Among certain Eskimos, the familiar is embodied in an artificial seal, not a live animal.

Canewdon Witches According to a prophecy by the famous 19th-century cunning man James Murrell, the Essex village of Canewdon, located in England’s “witch country” of…

According to certain religious doctrines, demons are evil spirits led by the devil (also known as Satan). The devil and his demons supposedly visit the…

A witch’s mark : In witch lore, an extra treat or nipple on witches for suckling familiars and Imps, who were said to crave human…