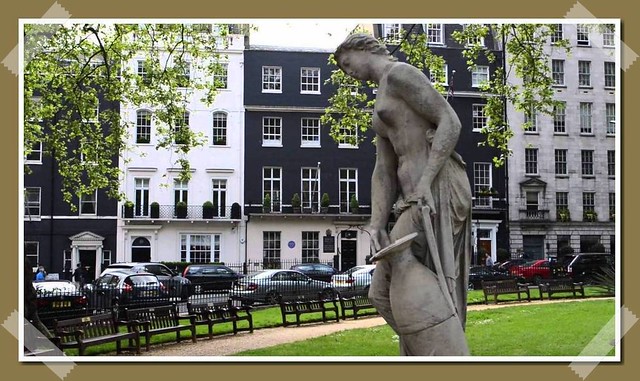 Fifty Berkeley Square is a home in London’s fashionable Berkeley Square known in Victorian days as “the most haunted house in London.” The house acquired a reputation for being haunted merely because the owner allowed the property to deteriorate. Once the reputation was established, reports emerged of terrifying phenomena at the house, and even several deaths were attributed to its ghosts and evil nature.

Fifty Berkeley Square was once the residence of George Canning, prime minister of England, who owned it until his death in 1827. The house was then leased to a Miss Curzon, who occupied it until her death in 1859 at the age of 90. The tenancy then passed to a Mr. Myers, the man allegedly responsible for its haunting.

The story goes that Mr. Myers was jilted at the last moment by his fiancée, and he turned into a bitter recluse. He took to living in a small room in the garret, and would open the door only to receive food from his manservant. But at night, he would wander forlornly about the dark house with a single lighted candle.

As the years went by, Myers became more eccentric, and the house began to fall into disrepair and ruin. The windows became caked with black dust and dirt. Myers failed to pay his taxes, and he received a summons in 1873 from the local council. He even failed to respond to that. He was not prosecuted further, as the local officials declared that his house was known to be haunted, as if that explained Myers’s bizarre behavior.

By 1879, 50 Berkeley Square had such a bad reputation that stories about it were played up in the press, including the magazine Mayfair (it is not known whether Myers was still living at the house). The magazine emphasized the house’s “ghostly feeling” and the fact that it “always seems oppressed into dullness by a sense of its own secret grandeur.”

Mayfair also reported anecdotes about evil happenings at the house in the past. Once upon a time a new maid was given an upper room. Not long after the family had retired for the night, they were awakened by terrible screams coming from upstairs. The maid was found standing in the middle of her room, “rigid as a corpse, with hideously glaring eyes,” unable to speak. “However, this, of itself, did not mean much, even when taken in connection with the house and with the room—women may go mad now and then without any ghostly dealings,” Mayfair intoned drily.

The maid was given a new room (in another version she died insane the next day in the hospital), and the family refused to use the haunted room. Then a visitor arrived, and they had no other place to put him. The man scoffed at the story about the maid, but said he would ring his bell once to indicate that he was all right, and twice to summon someone if he needed help. After he retired, he rang the bell once. Shortly thereafter, the family heard the bell ring madly. They dashed upstairs to find the man dead in the middle of the room. Mayfair appealed to the owner of the house to come forward and confirm or deny the tales, but no response was made.

Another version of the second story identifi es the victim as Sir Robert Warboys, who accepted the challenge of his club to prove that the tales about the house were “poppycock.” After the bell began to jangle wildly, rescuers heard a shot. They dashed upstairs and found Warboys dead across the bed—but not from being shot. He appeared to have been frightened to death.

Other stories added to the house’s reputation. LORD THOMAS LYTTLETON reportedly spent a night in the haunted upper room, protecting himself with two shotguns loaded with buckshot and silver sixpence coins. During the night he fired at a shape that lunged out of the darkness at him, and that something dropped to the floor “like a rocket.” No evidence but buckshot holes in the floor was visible the next morning.

According to another story, the house is haunted by the ghost of a woman who lived there with her lecherous uncle. To escape him, she threw herself out of the garret window, and her ghost still clings to the ledge and screams.

The most chilling story of all concerns two sailors from the frigate HMS Penelope who came to town on December 24, 1887. They found a “to let” sign on the house, but it was empty, so they let themselves in. They went to sleep in a second-story bedroom. In the middle of the night, footsteps were heard in the corridor outside the room, and a dark and shapeless “thing” (later described as a white-faced man with a gaping mouth) entered and attacked them. One sailor escaped. The second was found impaled on the railings of the basement steps as though he had fallen through the bedroom window.

During the 1870s and 1880s, neighbors of the house complained it was the source of loud noises, cries, moans, and Poltergeist phenomena such as ringing bells, furniture being moved about, objects, stones and books being thrown out of the house, and windows being thrown open. One natural explanation put forward by Charles Harper in Haunted Houses (1924) is that the house was owned by a Mr. Du Pre of Wilton Park who kept his lunatic brother imprisoned in the garret. The man was violent and threw objects about, and cried and moaned a great deal.

Other impossible explanations are that natural noises and movements came from the proximity of the house, but were associated with the haunting because of the house’s reputation; or, that the phenomena were imagined or exaggerated for the same reason.

In 1939, the house was leased by the Maggs Brothers, antiquarian booksellers. No phenomena have been reported in recent years. 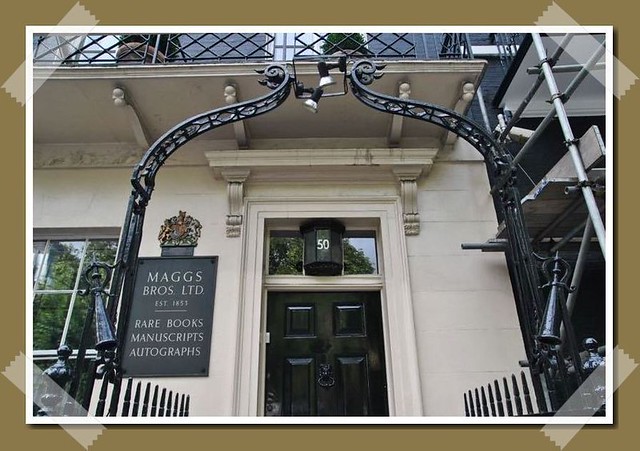 In Victorian times, a grisly legend circulated about No. 50, Berkeley Square. It apparently arose in the 1850s, when the house was occupied by an eccentric recluse, Mr Myers, who let it fall into decay and lived in one room only; he was said to have gone mad when jilted on the eve of his wedding. By 1879, according to the magazine Mayfair, the dreary house was standing empty, ‘with windows caked and blackened by dust’, and was strongly rumoured to be haunted – though why, and by whom, or by what, was never clear. The magazine repeated some of the tales, while urging the owner to clean up his property. The evil, it seems, was centred in one of the top-floor rooms. A maid was given it as her bedroom, with disastrous results:

An hour or two after the household was at rest, it was awakened by fearful screams from the new servant’s room, and she was found standing in the middle of the floor, as rigid as a corpse, with hideously glaring eyes – she had suddenly become a hopeless and raving mad woman, who never found a lucid interval wherein to tell what had made her so.

The room was then left unused, but some while later a sceptical guest insisted on spending the night there; he arranged with his hosts that if all was well he would ring the service bell once, but that if he rang twice, someone should come at once. After a while, the bell rang frantically; his friends rushed upstairs, and found him dead. Indeed, said the Mayfair journalist, it was rumoured that many people had met the same fate. Moreover, the owner only came to the house once every six months, when he would enter a locked upstairs room – possibly to practise black magic.

The rumours had also been discussed in an exchange of letters in Notes and Queries earlier in the 1870s, some supporting the alleged tragedies (though always at second or third hand), and others debunking them; maids who had worked in the house in Mr Myers’ time, and a butler who had served the previous owner in the 1850s, all denied any ghostly happenings.

Fictional writers picked up versions of the legend, wittingly or unwittingly. Rhoda Broughton, a novelist, agreed that one of her short stories (‘The Truth, the Whole Truth’, 1873) closely resembled the supposed events in Berkeley Square, but said she had actually been inspired by something that she had been told happened in a country house, not in London at all. In her version, the maid and the rash young visitor both cry out, ‘Oh my God, I’ve seen it!’ before falling dead.

Virtually every popular writer on the paranormal in Britain offers his own version. Several stress an episode which had not formed part of the earliest accounts, that of two sailors who had broken into the deserted house to sleep there, but encountered something so terrible that one jumped from an upstairs window to escape, and died, impaled on the railings below. In some versions his companion goes mad; in others he escapes and tells the tale. R. Thurston Hopkins describes the ‘horrible intruder’:

J. A. Brooks, on the other hand, speaks of a ‘horrible shapeless object [which] slid into the room’.

The supposed cause for the haunting is variously given. Antony Hippisley Coxe lists three: that one owner kept his mad brother locked away in that room; that a girl threw herself out of the window to escape a sexual assault by her uncle; and that a Scottish maid was tortured there. It was said that when the house was eventually let again, towards the end of the nineteenth century, the new tenants were charged only a peppercorn rent for the first three years, but would have to pay a huge forfeit if they lost their nerve and quitted.

While in college, I roomed with a girl whose family, at that time was living in an old rented house in Bolton, Virginia. Quite often,…

A Victorian cheap magazine entitled Mother Shipton’s Miscellany once carried a story about strange events at a house in Soho Square in 1704. Its owner…

When I was a kid, my family bought a second-hand house in Singapore. According to the neighbours, the previous owner rented the house out for…

David Hughson (Dr David Pugh) writes in his Walks through London … with the Surrounding Suburbs (1817): Passing on to Cheshunt: here is a plain…

Our resident ghost has made himself known in various ways-through sounds, such as phantom footsteps, or actual speaking (see the story “He Speaks”), to practical…