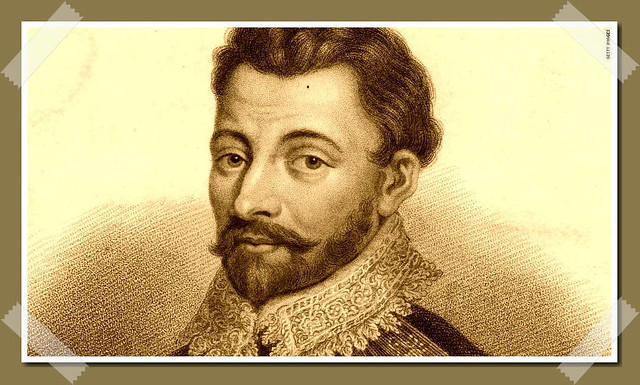 Sir Francis Drake (1540–1596) was an English navigator, who, in legend, is reputed to have been a wizard. Sir Francis Drake supposedly remains in eternal slumber, ready to spring once again to life whenever Britain is in danger. Few historical figures in Britain have accumulated so many legends as has Drake.

Drake, a native of Devon, was the first Englishman to circumnavigate the globe, between 1570 and 1580, in his ship the Golden Hind. He fought Spanish vessels and settlements, and navigated the Strait of Magellan. He pillaged North and South America and returned to Queen Elizabeth I in 1580 with great treasures. For his deeds, he was knighted.

In 1588, King Philip II of Spain launched the Spanish Armada to invade England. The 130 ships, bearing some 30,000 men, were delayed by storms. When they met the English fleet, of which Drake was an admiral, they were severely battered and scattered. The Armada fled north, sailing around Scotland and Ireland, where it was buffeted by more storms; it finally returned to Spain, with only half of its original force. It was said among the Spaniards that Drake possessed a magic mirror that enabled him to see ships in all parts of the world.

According to legend, Drake sold his soul to the Devil in exchange for prowess at sea. In concert with Devon witches, he cast spells that raised the storms against the Spanish Armada. The ghosts of those witches are said to still haunt Devil’s Point, the headland overlooking the entrance to Devonport. The Devil was so pleased with Drake that he built him a house at Buckland Abbey in only three days.

Drake also reputedly used his magical skill to give Plymouth a new water supply: he said a spell over a Dartmoor spring and commanded the water to follow him to Plymouth. Still another legend tells of how Drake sat whittling one day on the cliff of Plymouth Hoe. Each wood chip that fell into the water sprang into a fully armed ship.

Drake fell in love with Elizabeth Sydenham, a noblewoman. Her family refused to allow her to marry a commoner. Drake retreated to sea. Elizabeth waited, then grew weary and became betrothed to another man. At their wedding, according to legend, a huge cannonball fell at the feet of Elizabeth—fired from Drake’s cannon from across the world. She cancelled the wedding. In 1585, she and Drake were married. The “cannonball” is identified as a footballsized meteorite now kept at Coombe Sydenham House.

Despite his legendary magical powers, Drake eventually was defeated by the Spanish in the West Indies in 1595. In 1596, he died aboard his ship off Puerto Bello, Panama. As he lay dying, he ordered his drum, which he had taken around the world with him, to be sent back to his home, Buckland Abbey in Devon. He said that if anyone beat on the drum when his beloved England was in danger, he would return and lead his country to victory. In this, Drake joins other legendary national heroes such as King Arthur and WILD EDRIC, who will return from the dead to defend their country.

The story about Drake’s drum has varied. It has been said to beat of its own accord whenever the country is threatened. It reportedly was heard in the West Country in 1914 at the start of World War I, and it was said to have beaten again when the German fleet officially surrendered in 1919. In the latter instance, a single drum beat was heard aboard British ships as they closed around the Germans’ ships. A search was made, but no unauthorized drummer was found. Sailors were convinced it was the sound of Drake’s drum, celebrating the victory. The drum also was reported to have been heard at the start of World War II.

Drake also appears in folklore as the leader of the Wild Hunt, a spectral night train in pursuit of lost souls.

Sir Francis Drake (circa 1540–1596), navigator, pirate, politician, and reputedly a wizard, was the first Englishman to circumnavigate the globe (1570–1580). His ship was named the Golden Hind. According to legend, Drake had a magic mirror that enabled him to see ships all over Earth. Another legend suggests that Drake was among the coven of Devon witches who cast spells and raised storms that sank the Spanish Armada.

In 1596, Drake died of dysentery aboard his ship near Puerto Bello, Panama. On his deathbed, he ordered his drum, which had accompanied him on all his journeys, sent back to his home, Buckland Abbey in Devonshire, advising that if England was ever endangered, someone should beat on his drum. The sound would summon him to appear and lead the country to victory. All sorts of legends exist regarding Drake’s drum; notably that it beats spontaneously whenever England is threatened. Drake’s drum was heard at the start of World Wars I and II.

Sir Francis Drake leads the Wild Hunt accompanied by his Wish Hounds (possibly a corruption of Witch Hounds). He’s described as driving an old-fashioned carriage-hearse pulled by headless horses. His barking Wish Hounds may be headless, too.