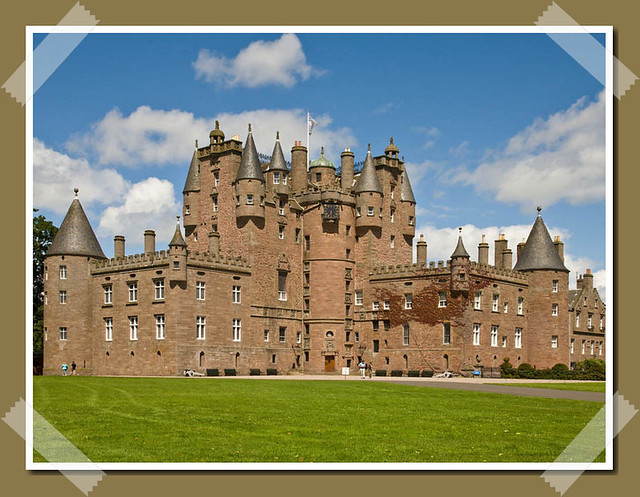 Glamis Castle : The oldest inhabited castle in Scotland, built in the 14th century, has more supernatural lore than perhaps any other castle in the United Kingdom. It is reputed to be the home to a legendary monster, a VAMPIRE and a fearsome menagerie of ghosts, some of whom are unknown for their connection to the castle while living. The castle curiously is said to have more windows when seen from the outside than when seen from the inside.

Glamis Castle (the birthplace of Princess Margaret and ancestral home of Queen Elizabeth, the Queen Mother) originally was the home of the lords of Glamis, who, according to legend, were drinking, gambling spendthrifts who lost their family fortune. By the mid-17th century, the castle was in ruins. It was then inherited by Pat rick Lyons, who rebuilt the family fortune and the castle and was made the earl of Strathmore. But in the 18th century, the family’s bad habits resumed.

In the early 1800s, according to legend, the Strathmores were confronted with an unpleasant situation. The first son of the 11th earl of Strathmore was born a hideously deformed, egg-shaped monster with no neck, tiny arms and legs, and a large, hairy torso. The Monster of Glamis, as he became known, was the true heir to the family estate. However, the child was not expected to live, and so the family hid him away in a secret chamber. His existence was known only to the earl, his second son, the family lawyer and the factor of the estate.

To everyone’s horror, the monster did not die, but remained strong and hearty. The estate was unlawfully passed on to the second son. In successive generations, as the monster lived on, each earl of Strathmore was informed on his 21st birthday of the true heir’s existence and was shown the creature. The earls were permanently changed by this revelation, and became silent, moody and withdrawn.

It is said that the monster lived a remarkably long life and died around 1921 or 1941. (Monstrous births that are punishment for wrongdoing, and which are locked up in houses or castles, are a motif in haunting folklore.) While the monster’s existence has not been proved, there are records of a secret and yet unknown chamber constructed somewhere in the depths of the castle. In 1880, a newspaper in Scotland told of a workman who ac cidentally knocked through a wall in the castle and found a secret passage to a locked room.

After he in formed the steward, the man disappeared, and it was said that he had been given a large sum of money and was sent off to Australia. A Ghost frequently reported seen at Glamis is that of Alexander, the fourth earl of Strathmore who lived in the late 17th century and early 18th century, and was better known as “Earl Beardie.” According to one legend, Earl Beardie, a Lord Glamis and two chieftains gambled one night in the tower (now uninhabited). They quarreled and cursed God.

The Devil appeared and doomed them to play dice there until Judgment Day. According to another version, Earl Beardie, drunk one Sunday, could find no one to play cards with him, and became so enraged that he said he would play cards with the Devil himself. The Devil obligingly appeared in the form of a tall, dark man wearing a black coat and hat. The two retired to a small room, from which issued sounds of loud shouting and swearing. The earl at last protested that he had lost all his money, and he apparently sold his soul.

The Devil vanished and took the soul with him. Earl Beardie died about five years later. Sounds of stamping, swearing and the rattling of dice still are said to drift from the tower. Earl Beardie’s ghost also has been seen fl itting around other parts of the castle. The ghost menagerie includes a woman, thought to be Janet Douglas, wife of James Douglas, the sixth lord of Glamis. James died one morning after eating his breakfast, and Janet was suspected of poisoning him, though no evidence linked her to the deed. Six years later, in 1537, she was accused of attempting to poison King James V.

She was condemned and burned at the stake at Castle Hill, Edinburgh. Her ghost appears above the clock tower, wrapped in flames or a reddish glow. Another ghost, of a madman, walks the roof along a spot called “The Mad Earl’s Walk” on stormy nights. Other ghosts include unidentified GRAY LADIES who haunt the chapel; a tongueless woman who races across the grounds, tearing at her mouth; “Jack the Runner,” a thin man who races up the drive to the castle; a black boy—perhaps once a badly treated page—who sits by the door of the Queen Mother’s sitting room; a woman with mournful eyes who clutches at an upper window as though imprisoned; and a tall figure dressed in a long, dark cloak.

Modern Poltergeist phenomena at the castle include a door which allegedly opens by itself every night, no matter how well secured or barricaded; strange hammerings and knockings; and bedclothes that are pulled off of overnight guests. Glamis’s vampire is said to be a woman servant who was caught sucking the blood of a victim. Legend has it that she was walled up alive in the secret chamber, where she continues to sleep the sleep of the undead, until someone finds her and she is loosed once again.

Two legendary murders are said to have been perpetrated at Glamis Castle, though it is unlikely to be true. Macbeth’s murder of King Duncan is believed to have been Glamis Castle 201 committed there because Shakespeare mentions Glamis Castle in Macbeth; Macbeth’s tortured ghost thus is said to haunt the place. Oddly, the murder of King Malcolm II, who reigned during the 11th century, also is placed at Glamis, despite the fact that the castle was not built until three centuries later.

Nonetheless, lore has it that a mysterious bloodstain from Malcolm’s murder could not be scrubbed off the floor, and the entire floor in the room had to be boarded over. This latter tale is an example of how some ghost legends persist even when historical fact Demonstrates otherwise. Compare to HAM HOUSE; HULL HOUSE.

Zvíkov Castle: Until 1597 there are stories about a Zvíkovský Rarášek (Rarach is a supernatural being common in Slavic folklore, similar to an imp or…

Château de Brissac is one of the many castles dotting the Loire Valley, and it is also among the most haunted places in the country.…

The Drummer of Cortachyis a Poltergeist haunting of the Scottish Earls of Airlie, the Ogilvys, of Cortachy Castle. The ghostly drumming was said to presage…