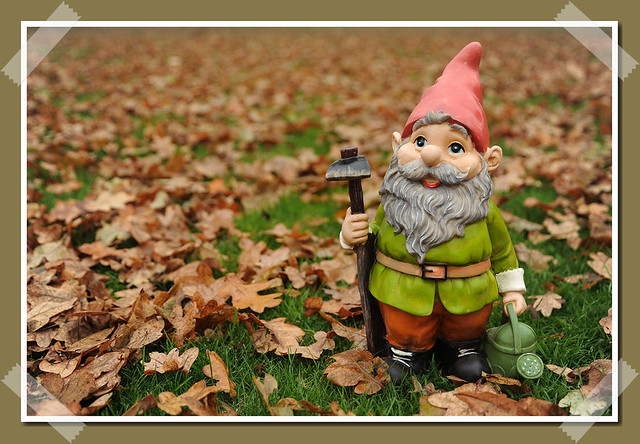 Gnomes are subterranean spirits now most associated with garden statuary. They resemble tiny people: Paracelsus described gnomes as two spans high. (A span is the width of an outstretched human hand.) Unlike dwarves or kobolds, gnomes are not mine or cave spirits but tend to live beneath human gardens. They have a reputation for emerging at night to do a little helpful garden work. Garden gnomes allegedly bring luck.

Gnomes tend to be quiet, private, taciturn spirits, but they respond well to gifts and offerings. They can be persuaded to become loyal allies, guardians, and helpers. Female gnomes may be especially taciturn; they are rarely depicted. However folklore indicates that there are entire gnome communities with male and female gnomes of all ages. Gnomes maintain good relationships with birds, rabbits, foxes, hedgehogs, and squirrels.

The earliest gnome statuary was produced in Thuringia, Germany, in the early nineteenth century and was based on German folklore. Gnome statues potentially welcome and attract real gnomes, as well as Flower Fairies or other benevolent spirits. The earliest statues were carefully wrought, hand-painted terra-cotta and were exceptionally popular.

By the 1960s, cheaper plastic and resin versions were mass-produced. The old terra-cotta ones are now extremely valuable and are family heirlooms. Garden gnome statues tend to evoke very visceral responses. Some people adore and collect them. Others loathe them so much that they feel justified destroying or removing other people’s property.

Gnomes are the subject of modern entertainment as well as old folktales: The animated children's television show The World of David the Gnome was highly unusual in that it depicted both female and male gnomes.

• The gnomes in J.K. Rowling’s Harry Potter series are garden pests, not helpers.

The standard garden gnome depicts an older male gnome with long beard and peaked red hat. He wears a big belt over leggings, a blue tunic, and boots. Sometimes they wear gardeners’ aprons.

The presence of galbanum (Ferula gal-baniflua) allegedly invites the protection of the gnomes.

Found in the folklore of various cultures, leprechauns, elves, dwarfs, gnomes, and goblins are thought by some people to actually exist. They are described as…

During the 1950s and 1960s, when science-fiction stories often depicted aliens as having green skin, the phrase little green men was typically used to refer…

Chiton Variations: SEIKTHA In Burmese demonology there is a type of demon known as a chiton that lives in groves, shrines, and trees. On occasion,…

A lutin is a French name for a hobgoblin common in French folklore and fairy tales. The lutin is either male or female; a female…

Kokopelli You may not know his name but if you have ever been to the southwestern United States, then you know Kokopelli’s image. He is…