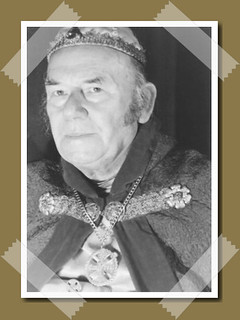 William G.Gray (1913–1995) was an English Ritual magician, occultist, and founder of the Sangreal Sodality.

William G. Gray was born in Harrow, Middlesex, England, on March 25, 1913. His grandfather, William Gray, was a rector in a lineage tracing to Archbishop Walter de Gray of York. His father, John McCammon Trew Gray, worked as a theatrical business manager. His mother, Christine Ash, a Scottish-American and a Catholic, became a well-known astrologer and introduced Gray to occult ideas at an early age. Christine Gray was naturally clairvoyant, and encouraged her son to explore and accept the paranormal. The young Gray was fascinated by Catholic ritual and persuaded his mother to have him rebaptized in the Catholic faith. When he was nine, his mother became ill and entered a sanitorium in Montreal. Gray also went to Montreal to enter the care of relatives. Upon Christine’s recovery, the family moved to Southampton, England.

During a bout with measles, Gray had a visionary experience that altered the course of his life. He found himself in a perfect place where everything was made of light, called into being by pure thought. The experience was permeated by wonder and ecstasy. Gray became interested in magic and experimented with rituals. In time Gray drifted away from the Catholic Church, alienated by its emphasis on sin.

Christine’s involvement in occult circles brought numerous visitors to the house, among them Aleister Crowley and his assistant Victor Neuberg. Gray liked Neuberg, whom he later described as“one of the gentlest men I ever met.” Crowley’s visits were brief; on one occasion, he presented Christine with a signed copy of his book 777. Christine burned it, feeling it to be a source of direct, bad influence from Crowley, but not before Gray had secretly copied it for himself.

Gray met Theosophists and Rosicrucians and was an avid reader—as was his mother—of the magazine Occult Review. It was through the magazine that Gray met his spiritual mentor, “ENH,” a Rosicrucian who was an associate of “Papus,” a French occultist whose real name was Gerard Encause. ENH wrote to Gray concerning a letter of Gray’s published in the magazine that dealt with rosicrucianism. Their resulting relationship lasted many years until ENH died of liver cancer. Gray credited him with much of his magical and spiritual development.

At age 18, Gray joined the Royal Corps of Signals of the British Army and was sent to Egypt, where he learned local magical and occult lore. He returned to England and in World War II served in active duty in France. He was evacuated during the battle at Dunkirk. After the war, Gray suffered a breakdown of health and was released from the army. He moved to Gloucester and worked as a chiropodist. He met his future wife, Bobbie, at a meeting of occultists and science-fiction afficionados. Bobbie became a professional astrologer and assisted Gray in his esoteric work. The couple had no children.

Gray circulated with occultists and self-professed Witches, the latter of whom included Doreen Valiente and Patricia Crowther, close associates of Gerald B. Gardner. Gray briefly joined the Society of the Inner Light, founded by Dion Fortune; he was not impressed with the society’s rituals.

At about this time, Gray suffered poor health from an abscessed tooth but made no marked recovery after the extraction of the diseased tooth. His health was restored by a magical healing circle ritual conducted by Robert Cochrane (Roy Bowers), who claimed a lineage of hereditary witches and was the founder of the Clan of Tubal Cain, known in America as the “1734” tradition of modern witchcraft. Cochrane told him to be asleep by midnight on a certain night, to take no sleeping aids, and not to be surprised by any dreams he might recall. Gray did as instructed. He described the results:

At some unknown hour I had the distinct feeling of being tossed from one person to another in a peculiar pattern as they chanted or sang amongst themselves. I seemed to be something like a ball or small parcel which they handed quite freely and easily between them. Suddenly I became conscious of lying in bed on my stomach with a piercing point of agony somewhere under my lower right ribs. Slowly it moved to my left side, then back again, after which it went in a downward direction and finally faded out entirely leaving me exhausted but entirely free from any pain. I felt so utterly relieved at this I straightway slipped back into sleep with intense gratitude.

In the late 1960s, Gray began to write about occultism and magic, starting with an essay on the kabbalah that he intended to circulate only among friends. The essay was so well received that he expanded it to a book, published as The Ladder of Lights, still considered a classic in Western occult literature. Gray wrote eight more books about the kabbalah and the Western Inner Tradition and four books on the Sangreal Sodality, an esoteric brotherhood he founded. Some of Gray’s work was published with the help of a wealthy America patron, Carr Collins.

The Sangreal Sodality resulted from inspirations Gray experienced while on a visit to South Africa at the invitation of Jacobus Swart, an occultist interested in Gray’s work. Gray and Swart worked Gray’s Rite of Light—which became Gray’s signature ritual—and Gray formed the Sangreal concepts. The basis is that all humans possess divine blood, brought to Earth long ago by star people, and which contains the potential for perfection. It is vital that humans recognize that they are all part of the same Being.

On his return to England, Gray wrote lessons and rituals which Collins backed for publishing in a series of books. Sangreal Temples were established in England by Gray, in South Africa by Swart, in Albany, New York, by Marcia Pickands, and in Brazil. To Gray’s keen disappointment, the sodality did not attract interest in Britain, and there was little rapport between the American and South African temples. In his waning years, Gray “passed the rod” of authority to Swart, his third choice.

Gray had strong opinions and was often scathing in his criticism of his peers. He ritually cursed others, including some of his students.

In his personal memoirs, Gray said that in his later years he finally discovered the meaning of the literal grail :

It was really too simple and yet too obvious. The real Holy Grail of historical significance had been the recognition and acknowledgment of a Feminine quotient to Deity as an equal and complementary Energy within the Christian Godhead. In other words, it was an objective of those who wanted the old Goddess worship restored to its proper place in their religious lives and practices.

Learn how you can deal constructively with the forces of darkness through a step-by-step technique to convert negative energies into positive spiritual light. This book…

Throughout the ages, the workings of magical ritual have been shrouded in more secrecy than probably any other subject. The peculiar secrecy surrounding magical practices…

This is the follow up book to NAP: The Miracle of New Avatar Power by Geof Gray-Cobb What This book Can Do For You •…