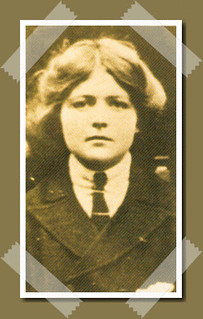 Dion Fortune (1891 -1946) The magical name of Violet Mary Firth, British occultist and author whose books continue to have an impact on modern witchcraft and Paganism. Considered one of the leading occultists of her time, Dion Fortune was an adept in ceremonial Magic and was perhaps one of the first occult writers to approach magic and hermetic concepts from the psychology of Jung and Freud (see Hermetica). Some contemporary Witches and Pagans consider her fiction more important than her nonfiction, for her novels contain Pagan themes and are a rich source for rituals.

Fortune was born into a family of Christian Scientists and displayed mediumistic abilities in her teen years. In her early twenties, she worked as a law analyst at the Medico-Psychological Clinic in London. Her interest in exploring the human psyche resulted from an unpleasant episode in 1911, when, at age 29, she went to work in a school for a principal who took a great personal dislike to her. When Fortune went to see the woman to announce she was leaving her job, she was subjected to invective that she had no self-confidence and was incompetent.

Fortune said later that the principal also conveyed this by psychic attack, using yogic techniques and hypnotism that left Fortune a “mental and physical wreck” for three years. As a result, she studied psychology, delving into the works of both Freud and Jung. She preferred the ideas of Jung but eventually concluded that neither Freud nor Jung adequately addressed the subtleties and complexities of the mind. The answers, Fortune felt, lay in occultism.

In 1919 Fortune joined the Alpha and Omega Lodge of the Stella Matutina, an outer order of the Hermetic Order of the Golden Dawn, and studied under J. W. Brodie-Innes. She experienced clashes with the wife of S. L. MacGregor-Mathers, one of the founders of the Golden Dawn, which she again felt were forms of psychic attack.

She left Stella Matutina in 1924 and founded her own order, the Community (later Fraternity) of the Inner Light. The order initially was part of the Golden Dawn but later separated from it. Fortune worked as a psychiatrist, which brought her into contact with other cases of psychic attack.

She was a prolific writer, pouring her occult knowledge into both novels and nonfiction. Her pen name was derived from the magical motto she adopted upon joining the Stella Matutina, “Deo Non Fortuna,” (“by God, not chance”), which became shortened to Dion Fortune. Her books are considered classics and continue to enjoy wide readership.

For a time she lived in Glastonbury and became deeply interested in the Arthurian legends and magical-mystical lore centred there. She wrote about Glastonbury in Avalon of the Heart. Fortune used her experiences with psychic attack to conclude that hostile psychic energy can emanate both deliberately and unwittingly from certain people and that one can mentally fend off such energy.

Her book Psychic Self-Defense (1930) remains the best guide to detection and defence against psychic attack. One of her most famous books is The Mystical Qabbalah (1936), in which she discusses the Western esoteric tradition and how the Qabbalah (see Kabbalah) is used by modern students of the Mysteries. The true nature of the gods, she said, is that of magical images shaped out of the astral plane by mankind’s thought, and is influenced by the mind.

Her other major non-fiction works include Sane Occultism (1929); The Training and Work of an Initiate (1930); Through the Gates of Death (1932); Applied Magic; Aspects of Occultism; and Spiritualism in the Light of Occult Science. Machinery of the Mind (1922) was published under her given name. But it is her novels that have captured the most interest among modern Witches and Pagans.

In particular, The Goat-Foot God (1936) concerns the powers of Pan, a Horned God, and offers a wealth of details on leys; The Sea-Priestess (1938) concerns the power of Isis, the moon goddess, and has been used by modern witches as an inspiration for creating rituals and invocations. Her other novels are The Secrets of Dr. Taverner (1926), about an adept who runs an occult nursing home; The Demon Lover (1927); and The Winged Bull (1936). Fortune was married to Dr. Thomas Penry Evans.

Fortune became an expert on psychic attack through her own experience, which she described in her book Psychic Self-Defence (1930).

As a young working woman in her twenties, she was subjected to mind manipulation by her female boss who, Fortune said, attempted to break her will . Fortune departed her job mentally shattered and physically exhausted. It took her three years to recover.

As a result, Fortune became interested in occultism, in an attempt to understand what had happened to her and to defend herself against any future such attacks. Her research led her to conclude that damage had been sustained by her etheric double, a nonphysical replica of the body which is attached to it and helps channel the universal life force to it.

Fortune believed that the damage to her etheric double, caused by her boss, created a leak in her life force. Fortune’s interest in psychic attack remained a focal point throughout her entire life and especially through her magical career. She worked as a psychiatrist, and attributed many of the symptoms in cases she saw to psychic attacks. In 1919, she took initiation into the Alpha et Omega Lodge of the Stella Matutina, an outer order of the Hermetic Order of the Golden Dawn which by then had splintered into various groups.

The Alpha et Omega Lodge was created by Samuel Liddell MacGregor Mathers, one of the original founders of the Golden Dawn, and his wife, Moina Mathers. Fortune took as her magical motto Deo Non Fortuna (“By God, not chance”). She was talented as a magician. She participated in psychic warfare and believed that Moina attacked her psychically. Fortune had numerous dramatic magical experiences, including materializing a thought -form werewolf .

The materialization happened spontaneously one night, and Fortune later concluded that it was the by-product of her hateful thoughts about revenge against a person. The werewolf seemed to emerge from the solar plexus area of her auric field. At first Fortune thought she could control the thought-form with her own will , but her magical teacher advised her to reabsorb the thought-form before it went out of control.

In 1924, Fortune departed Stella Matutina and founded her own order, the Community (later Society) of the Inner Light. Initially, the order was part of the Golden Dawn, but later it separated. Fortune authored a number of fiction and nonfiction books about the occult. Psychic Self-Defence is considered the definitive work on psychic attack and psychic vampirism. Fortune was married to Dr. Thomas Penry Evans. She died in January 1946. The Society of the Inner Light is based in London and continues to offer teachings in the Western occultism.

Brodie-Innes, J. W. (1848–1923) Scottish occultist, lawyer, and author, noted for his involvement in the Hermetic Order of the Golden Dawnand the Theosophical Society. John…

A selection of Dion Fortune’s writings on the practical applications of magical and esoteric techniques. She explains that everyone has the ability to access the…