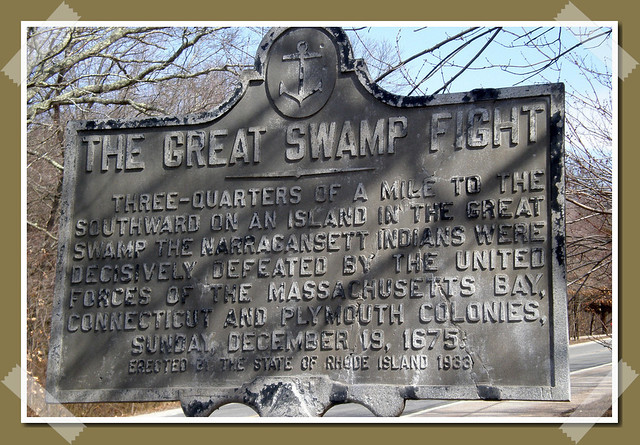 On a cold December morning in 1675, a large, heavily armed contingent of Colonial militia and regular British troops slipped silently through the morning mists toward a waking native encampment.

It was their hope that they would catch what they regarded as renegade Indians offguard and stop an impending Indian war before it could begin. This was the powerful Narragansett tribe’s winter camp, and with the help of their Pequot and Mohegan scouts, the troops hoped that this secret sanctuary was to become the Narragansett’s graveyard.

The smoke from the inhabitants’ cooking fires lingered like a specter above their wigwams and long houses. The occasional cry of an infant waking from his sleep betrayed the true nature of the “enemy” below. Suddenly, one of only a few younger braves left behind to guard the camp spotted the invaders and opened fire. The shot warned the camp of the impending danger, but it was too late.

Volley after volley of “modern” musket fire sent waves of hot lead into the encampment, making quick work of running women trying to flee with children. Men bearing tomahawks and knives and using the butt of their rifles as clubs quickly dispatched the remaining old and sick. The target of their attack, Chief Metacom (King Phillip), was not at the encampment as their scouts had promised. Despite their losses at the hands of those few defenders, the war they had attempted to avoid had just begun by their own hand.

Today, an old and decaying memorial stands, where it was erected by colonists at the close of the war, shortly after 1675. Defiant of the facts, it tells of a great battle against the Narragansett, not of the massacre of unarmed innocents that really took place not far from that spot. More than a few visitors to the monument and to the surrounding hiking trails have told of an overwhelming sadness coming over them.

More still have repeated how the area forests will suddenly fall silent for no apparent reason—often followed by the eerie sound of distant cries and even screams coming from the thick confines of a still almost impregnable swamp. Yet others have been driven back to their cars by the sudden chill coming over them and the endless and unnerving feeling that they were being observed.

Repeated investigations of the area by several serious groups have confirmed it as being a hotbed of paranormal activity.

THE GREAT SWAMP MASSACRE SITE
THE SITE IS ON ROUTE 2, JUST SOUTH OF THE ROUTE 138 AND ROUTE 2
ROTARY SOUTH COUNTY, RHODE ISLAND