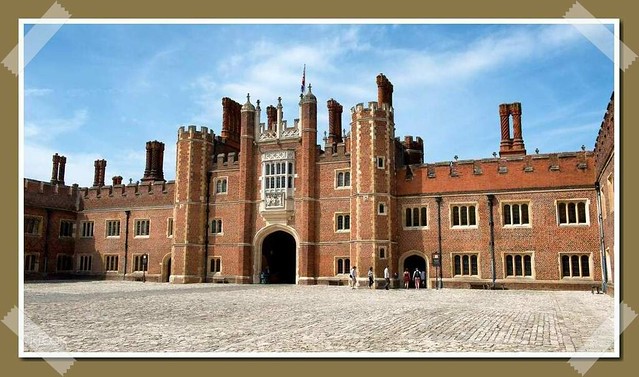 Hampton Court Palace is the palace given to King Henry VIII by Cardinal Thomas Wolsey, his disgraced chancellor, that is said to be haunted by as many as 30 ghosts.

Hampton Court is located on the Thames River on the outskirts of London. Construction began in 1514 when Wolsey was archbishop of York. A powerful man who virtually controlled English domestic and foreign policy, Wolsey desired a luxurious palace to reflect his increasing political status. Henry VIII made him a cardinal and lord chancellor in 1515. Except for the king, he was the most powerful person in England and as a result had many jealous enemies.

The Tudor design and furnishings were rich and lavish, reflecting Wolsey’s wealth and status. Wolsey began using Hampton Court to entertain ambassadors and diplomats. It was nearly complete in 1525 when Wolsey gave it to Henry in exchange for Richmond Palace. Perhaps Wolsey feared that his palace was too ornate, outstripping the king’s own palaces at St. James and Whitehall.

Unfortunately for Wolsey, he failed to convince Pope Clement VII that Henry should be granted a divorce from his wife, Catherine of Aragon, who had not borne him a son. Wolsey’s enemies used this failure as a wedge between him and Henry. In 1529, Henry stripped him of his lands, possessions and all titles save for the archbishopric of York. A year later Wolsey was falsely charged with treason. He died en route to prison in London, a merciful event, for he would have been tried, convicted and beheaded.

Thus was the unhappy history of Hampton Court initiated. Henry broke with Rome, had his marriage to Catherine declared invalid, assumed papal powers as the head of the new Church of England and shut down the Catholic monasteries. He married his mistress, Anne Boleyn, who bore him a daughter. Henry charged her with adultery and had her beheaded. His next wife, Jane Seymour, died in childbirth. Henry divorced Anne of Cleves, his fourth wife, after only six months. Fifth wife Catherine Howard suffered Anne Boleyn’s fate. Catherine Parr, wife number six, lasted until the king’s death in 1547. She quickly remarried but died in childbirth.

Henry made alterations to Hampton Court, including building the Great Hall. In 1540 he installed a nowfamous astronomical clock that shows the sun revolving around the earth. Much of the turmoil of his personal life took place in the palace.

After his death, the palace was used as a royal residence until the reign of George II (1727–60). The famous architect Sir Christopher Wren redesigned it for Queen Anne, who ruled from 1702 to 1714. Today Hampton Court is a national historic site, and much of it is open to the public.

Two of Hampton Court’s Ghosts are associated with the construction of the palace. Wolsey’s ghost was seen under one of the archways by a member of the audience viewing a sound and light show in 1966. Also, mysterious, unexplained footsteps and other strange happenings occur on the anniversary of the death of Wren at the Old Court House. Wren lived there while supervising the palace’s renovation, and he died there on February 26, 1723.

Jane Seymour, Henry’s third wife, died at Hampton Court one week after she gave birth to the boy who later became King Edward VI. Her ghost, carrying a lighted taper, has often been seen on the anniversary of his birth. She ascends the Silverstick Stairs.

Among other ghosts are two officers who fought for King Charles I and who haunted the palace’s Fountain Court with loud noises in the middle of the night until they were given a Christian burial; the White Lady of Hampton Court; and the headless Archbishop Laud, all of whom have been seen on the grounds. During World War II a constable was startled to see an entourage of ghosts, including two men and seven women, walking about the grounds.

Two famous ghost stories told about Hampton Court appear to be more fiction rather than fact, however. Catherine Howard, Henry’s fifth wife, who was beheaded in 1542, is said to run through the long gallery every November screaming for mercy. The story can be traced only to the end of the 19th century. Sibell Penn, the nurse to Edward VI, reportedly does ghostly spinning; this story has no foundation, either.

In March 2001, Richard Wiseman, a psychologist, stage magician, and paranormal skeptic at Hertfordshire University, took a team of investigators to Hampton Court and claimed to debunk the haunting. The team installed thermal cameras and air movement detectors in the gallery. They interviewed about 400 visitors on whether or not they felt a presence. About half reported marked drops in temperature and a sense of a ghostly presence. Some said they saw ghostly figures in Elizabethan dress.

According to Wiseman, the temperature drops could be explained by drafts through old concealed doors. He explained the seeing of figures as the product of people’s expectations and the power of suggestion.

In December 2003, video from closed-circuit television surveillance at Hampton Court, taken on October 7, was released to the media. It showed a long-robed figure suddenly emerging through heavy doors that appeared to pop open of their own accord. The figure strode out and the door slammed shut. Security alarms went off. The next day, the doors opened but no figure appeared. The footage initially caused a stir, with many people believing that the monklike figure was a ghost. It was revealed to be a hoax.

In Hampton church is the imposing funeral monument of Mrs Sybil Penn, who died on 6 November 1562 of smallpox. She is shown lying full-length…

Tower of London This blood-soaked site once served as a prison and execution site, and it is said to be filled with the ghosts of…

Mohatta Palace – Karachi Mohatta Palace city21/city21.tv Built in 1927 by Shivratan Chandraratan, it was abandoned when India and Pakistan partition took place. This incredible…