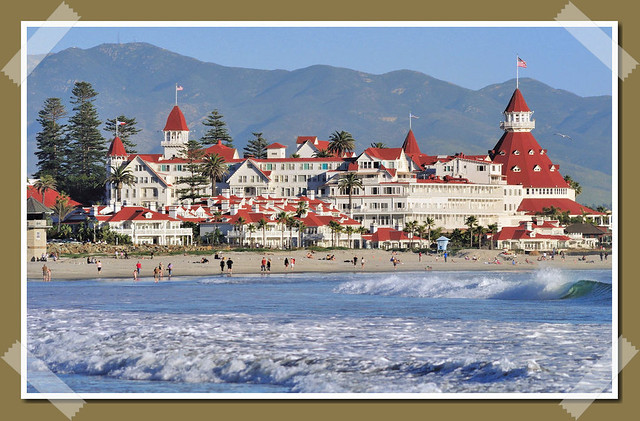 Hotel del Coronado is a glamorous resort off the coast of San Diego, California, that is haunted by the Ghost of a woman who died there either by murder or SUICIDE, a mystery never solved. The stories of what happened vary and probably have been embellished over time.

The Hotel del Coronado was built in 1888 and still retains its Victorian splendor. The huge resort is located on Coronado Island in San Diego Bay, accessible from the city by bridge. The hotel has a long history of hosting celebrities and royalty. It is said that Prince Edward of Wales first met Wallis Simpson there in a ballroom in 1920. She was married to an American naval officer at the time. After her divorce, she and Edward fell in love, and he abdicated the throne of England for her. They became the Duke and Duchess of Windsor. Among other noted guests have been Marilyn Monroe and Richard Nixon.

The principal ghost is believed to be that of Kate Morgan, who met her tragic end in November 1892. She was traveling by train with her husband, a card shark named Tom Morgan. They were passing through Los Angeles when Kate told Tom she was pregnant. They quarreled, and Tom got off the train but agreed to meet her in San Diego for Thanksgiving.

Kate checked into the Coronado on Thanksgiving Day, November 24, under the name of Lottie A. Bernard, from Detroit. She was given Room 3312. Tom failed to come. Kate waited for two days, complaining of pains. She may have induced an abortion. She took a ferry to San Diego, where she bought a .44-caliber gun. She left a message for Tom at his hotel and then returned to the Coronado.

The next day, Kate was found dead on the steps of the hotel’s north entrance, leading to a sandwalk. She had been shot in the head. Her hand clutched her gun, which was missing one bullet. It appeared to be suicide, except the bullet that killed her was either from a .38-caliber or a .40-caliber gun.

The mystery of her death was never solved. In addition, a maid in Room 3502 who had taken care of her disappeared the day after Kate’s funeral, never to be found. Speculation is that Tom killed his wife, and perhaps the maid too. However, Tom was never seen at the Coronado. If he came to murder, he was extremely careful.

As in many hauntings, different versions of the story are told. In another version, Kate was from Dubuque, Iowa, and married a gambler named Lou in order to escape her dreary life. They traveled around, and Lou won enough money to buy a house in Los Angeles. He departed to gamble at the Hotel del Coronado. After an absence of months, he sent her a letter saying she should get a divorce.

The distraught Kate, who was pregnant, went to the hotel. She checked in and was given Room 302 (now 3502). Dressed in a new gown, she went to the gaming room intending to surprise Lou but was surprised herself when she found him with another woman.

Kate fled in shock. She went out and bought a gun, returned to the hotel and shot herself to death on the veranda. Her rain-soaked body was found the next morning. Lou quietly slipped away and never claimed the remains.

In other stories, Kate aborted her child in her room, 3502, and then tried unsuccessfully to drown herself before she fatally shot herself. Or, she was having an affair with a hotel executive who terminated the relationship. She committed suicide and her body was buried on hotel grounds.

Whatever the truth, the APPARITION of Kate, a pretty brunet in black Victorian dress, is seen moving through corridors or standing by windows as though she waits for someone, perhaps her husband. People who sleep in Rooms 3312 and 3502 sometimes hear faint voices whispering in the night or sense a presence in their room. Room 3502 is more active. Gurgling sounds are heard in the bathroom, as though someone were drowning in the tub. Guests feel cold chills, dizziness and strange sensations.

Guests in other rooms, especially in the old part of the hotel, experience similar phenomena, as well as peculiar problems with their telephones and strange images that appear on their television sets.

Taken from : The Encyclopedia of Ghosts and Spirits – Written by Rosemary Ellen Guiley – September 1, 2007

On November 25, 1892, Kate Morgan checked into the Hotel del Coronado. She never checked out, and by the many ghostly reports coming from the hotel over the decades, she’s never left.

Built in 1888 by Elisha Babcock and H.L. Story, their vision for the resort was for it to be the “talk of the Western world.” A luxurious hotel overlooking the sparkling waters of the Pacific Ocean was built—it’s a place that has accommodated dignitaries and celebrities from all over the world. Today, the resort and spa still lives up to its opulent reputation, and the ghost of Kate Morgan is still experienced and seen to this day.

Kate was an attractive woman in her mid-20s when she checked into the hotel by herself on Thanksgiving evening, 1892. Many of the hotel staff who interacted with her during her stay reported she seemed ill or unhappy. She claimed she was waiting for her brother to join her at the hotel— though he never showed. On November 30, 1892, Kate’s lifeless body was found on the exterior staircase leading to the beach. She had a gunshot wound to her head, which the local authorities determined to be self-inflicted.

Inside her room there were no personal belongings and nothing to identify her except the name she checked in with: “Lottie A. Bernard.” After sending sketches of this woman around the country, she was eventually identified as Kate Morgan from Iowa. Apparently, she and her husband had an argument on the train while en route to San Diego. Her husband got off at an earlier stop, and Kate went on to the Hotel del Coronado expecting her husband to show up, but he never did.

Kate has been blamed for televisions and lights going on and off by themselves, for mysterious cold spots, perfume smells that seem to have no source, and for making an appearance as a semi-translucent woman in the hotel as well as on the staircase where she took her own life.

Back to Haunted California