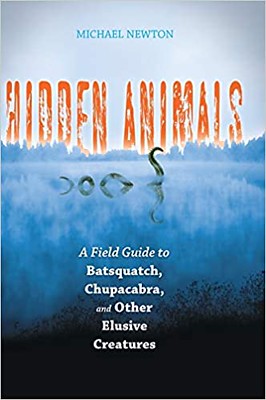 A global survey of unknown creatures reported by thousands of eyewitnesses―creatures that have either been verified, refuted, or are still being examined by scientific researchers.

Hidden Animals: A Field Guide to Batsquatch, Chupacabra, and Other Elusive Creatures welcomes readers into the fascinating world of cryptozoology―the scientific pursuit of legendary creatures that sometimes reveals hoaxes and sometimes identifies real, previously unknown species. Compiled by Michael Newton, author of the acclaimed Encyclopedia of Cryptozoology, it is the first comprehensive guide covering the crossroads of zoology and folklore written for both the young and the young at heart.

Organized by type of creature type, such as giant animals, missing links, and living fossils, Hidden Animals surveys various beings reported and pursued worldwide from ancient times to the present, in every corner of the globe. In the process, it relates classic myths and legends to identified flesh-and-blood animals. Readers will be captivated by both the scientific evidence supporting the existence of specific cryptids and the exposure of notorious frauds or cases of mistaken identity.

“Cryptid” is a relatively new word used among professionals and laypeople to denote an animal of interest to cryptozoology. John E. Wall of Manitoba coined…

In most cases, when someone sights a mysterious beast, upon closer examination it turns out to be an ordinary animal that was mistaken for something…

Every culture on earth has its tales of the paranormal. While many contain stories of ghosts and supernatural events, the existence of paranormal creatures is…

When a wild animal is reported as being in a location where that species should not be found, with no sign that anyone has let…

Scientists say that dinosaurs became extinct millions of years before humans appeared on Earth, but some people claim that these creatures have survived in some…