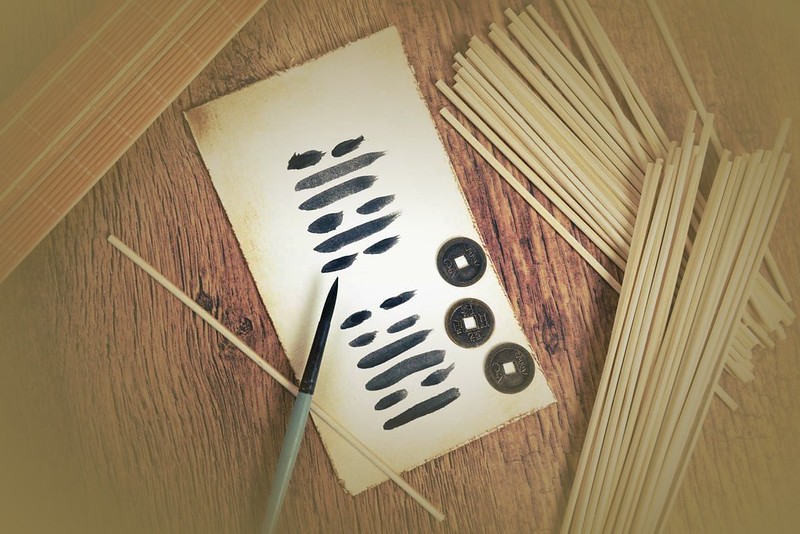 The I Ching (Yijing) is an ancient system of Chinese wisdom, often consulted for oracular Divination. The I Ching, which means “Book of Changes,” consists of 64 hexagrams of solid and broken lines. A hexagram is determined by the tossing three times of three coins or 50 yarrow sticks. Each hexagram has a meaning, which must be interpreted.

The I Ching expresses an entire philosophy based upon the concept of a unified and cyclical universe, in which the future develops according to fixed laws and numbers. There is no “coincidence” or “chance” but causality, Carl G. Jung’s concept of synchronicity.

The toss of the coins or sticks creates a synchronous event with the search for guidance. The I Ching shows what is possible when the mature “Superior Man” is in harmony with the flow of yinand- yang energy. Its symbols reveal a high moral, social, and political code.

The I Ching does not give definitive answers but forces the inquirer to look within for answers. It reflects a moment in time and shows probable outcomes if various alternatives are undertaken. As a teacher, it instructs the pupil in how the Superior Man would respond to situations.

Like the tarot , the I Ching requires intuitive thought and an awareness of the flow and fl ux of energy throughout the universe. The foundation of the I Ching dates back thousands of years in Chinese history, the evolutionary product of thought that pondered humankind’s relationship to the tai chi, the Universal Principle.

The hexagrams are composed of two trigrams that according to tradition, were developed by Emperor Fu-hsi (Fuxi) in about 2852 b.c .e. The solid lines represents the yang, or male/active/creative energy, and the broken lines represent the yin or female/passive/ receptive energy.

Initially, Fu-hsi developed eight trigrams which represented the eight components of the universe: heaven, earth, thunder, water, mountain, wood and wind, fire, and marsh and lake. The trigrams were doubled into 64 hexagrams in about 1143 b.c .e. by King Wen, a founder of the Chou (Zhou) dynasty. Wen organized the hexagrams and gave a name and a sumMary text of attributes and advice to each one.

A commentary on the symbolism and meaning of the lines was added by the king’s son, the duke of Chou. The I Ching inspired Lao Tzu (Laozi; 604–531 b.c .e.), who drew upon it in the writing of Tao te Ching, the central text of Taoism. Confucius (c. 551–c. 479) also was inspired by it in his later years and added 10 commentaries, now called the Ten Wings appendices.

The I Ching did not reach the West until the 19th century when it was translated by James Legge and Richard Wilhelm. Wilhelm’s translation—first into German and then into English—includes a foreword by Jung, who saw the I Ching as a way to tap into the collective unconscious through meditation upon the symbols. The hexagrams are used in magical work as doorways for astral projection.

The Encyclopedia of Magic and Alchemy – by Rosemary Ellen Guiley