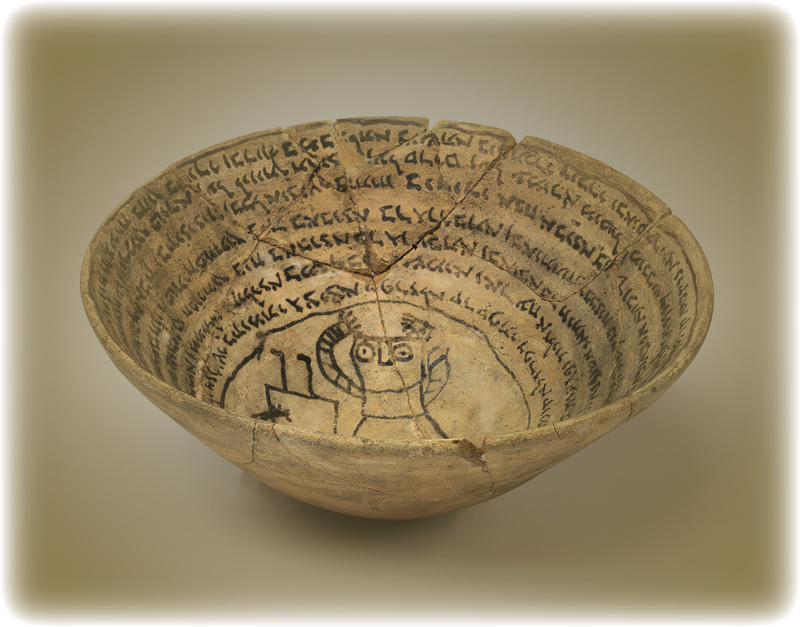 An incantation bowl is a terra-cotta bowl inscribed with Charms or magical texts, used to trap or drive away Demons. Incantation bowls also are known as Babylonian Demon or Devil traps.

The bowls, about the size of soup tureens, were inverted and buried under the four corners of the foundations of houses and buildings to seal the cracks where Demons could sneak in. Their magic was believed to protect against an assortment of evils, including male and female Demons, especially the attacks of Lilith and her offspring; illness; Witchcraft; the Curses of sorcerers; and the Evil Eye. The bowl either overturned or captured Demons.

Incantation bowls were common among the Babylonians and the Hebrews, who were held captive for a time in Babylonia. Their period of usage is uncertain but ranges at least from the second century to the seventh century. Almost all of the bowls that survive are inscribed in Aramaic; a few are inscribed in Persian. The charms are written in ink in a spiral from the rim to the center, and sometimes on the outside of the bowls as well. Some of the centers of bowls have a primitive drawing of a Demon in chains. The charms specify protection of homes, families, and possessions. One bowl proclaims a “bill of divorce” from the Devil and all his night monsters, ordering them to leave the community.

Many of the inscriptions call upon powerful Angels or King Solomon and the power of the seal of his magical ring. The name of the great angel Metatron appears often on incantation bowls in invocations for angelic help. Various titles given him are the Great Prince of the Whole World, Prince of the World, and Great Prince of God’s Throne.

Some Jewish bowls refer to the Angel of Yahweh with this or similar inscriptions: “YYY the Great, the angel who has 11 names.”

An example of a charm is the following:

!!!The Demon NTY?, TTY QLY?. BTY?, Nuriel, Holy Rock. Sealed and countersealed and fortified are Ahat, the daughter of Imma; Rabbi, Malki and Dipshi, the sons of Ahat; and Yanai the daughter of Ahat, and Ahat the daughter of Imma, and Atyona the son of Qarqoi, and Qarquoi the daughter of Shilta, and Shilta the daughter of Immi—they are their houses and their children and their property are sealed with the seal-ring of El Shaddai, blessed be He, and with the seal ring of King Solomon, the son of David, who worked spells on male Demons and female liliths. Sealed, countersealed and fortified against the male Demon and female lilith and spell and curse and incantation and knocking and Evil Eye and evil black-arts, against the black-arts of mother and daughter, and against those of daughter-in-law and mother-in-law, and against those of the presumptuous woman, who darkens the eyes and blows away the soul, and against the evil black-arts, that are wrought by men, and against everything bad. In the name of the Lord. Lord, Hosts is His name, Amen, amen, selah. This charm is to thwart the Demon Titinos. Sealed are the bodies (?) of S QL, the bodies (?) of S QL MYLY MYLY TYGL.

Many bowls were inscribed against Lilith, one of the most feared Demons of all. She is often the Demon depicted bound in chains in the center of the inscriptions. Inscriptions either cast her out or issue decrees of divorce from her. The first inscription that follows cites the use of IRON, a common means of weakening or binding spirits, especially evil ones:

Thou Lilith of the desert, thou hag, thou ghoul . . . naked art thou sent forth, unclad, with hair disheveled, and streaming down your back.

Lix Tetrax is a Fallen Angel and Demon of the wind. In the Testament of Solomon, Lix Tetrax is summoned to the presence of King…

A rabisu is a type of Babylonian Demon who lurks at the thresholds of homes, waiting to attack humans. Rabisu means “the ones that lie…

The DemonKunopegos (Kunopaston) is a Demon in the shape of a sea horse. Kunopegos is a cruel spirit who raises himself up like great waves…