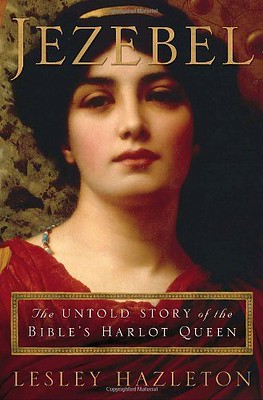 There is no woman with a worse reputation than Jezebel, the ancient queen who corrupted a nation and met one of the most gruesome fates in the Bible. Her name alone speaks of sexual decadence and promiscuity. But what if this version of her story, handed down to us through the ages, is merely the one her enemies wanted us to believe? What if Jezebel, far from being a conniving harlot, was, in fact, framed?

In this remarkable new biography, Lesley Hazleton shows exactly how the proud and courageous queen of Israel was vilified and made into the very embodiment of wanton wickedness by her political and religious enemies. Jezebel brings readers back to the source of the biblical story, a rich and dramatic saga featuring evil schemes and underhanded plots, war and treason, false gods and falser humans, and all with the fate of entire nations at stake. At its centre are just one woman and one man—the sophisticated Queen Jezebel and the stark prophet Elijah. Their epic and ultimately tragic confrontation pits tolerance against righteousness, pragmatism against divine dictates, and liberalism against conservatism. It is, in other words, the original story of the unholy marriage of sex, politics, and religion, and it ends in one of the most chillingly brutal scenes in the entire Bible.

Here at last is the real story of the rise and fall of this legendary woman—a radically different portrait with startling contemporary resonance in a world mired once again in religious wars.

Jezebel Jezebel, as recounted in the Old Testament’s First and Second Book of Kings, is the Phoenician princess and priestess of Asherah who was married…

With keen insight, John Paul Jackson peers through the enemy’s smoke screen and exposes one of the most deceptive snares used to destroy the Church.…

Herodias the witch-goddess leads the Wild Hunt. Popularly venerated during Europe’s witch-hunt era, Herodias the goddess may or may not derive from the historical Herodias,…

In the famous story Sleeping Beauty, a king and queen, celebrating the birth of a long-awaited royal heir, throw a festive banquet for Fairies. Each…