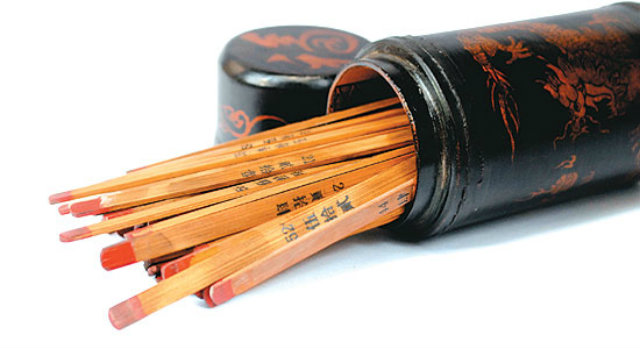 Kau Cim is a fortune telling practice in which the querent requests answers from a sacred oracle lot. Kau Cim is often referred to as Chien Tung or Chinese Fortune Sticks by westerners. Kau Cim is also sometimes known as “The Oracle of Guan Yin” in Buddhist traditions.

Kau Cim originated in China. The practice is often performed in a Taoist or Buddhist temple in front of an altar. In the USA, a version has been sold since 1915 under the name Chi Chi Sticks.

The prediction begins with the cup storing a number of the sticks. After the querent has finished their devotions to the main deity, the querent kneels and thinks silently or whispers it to the deity about their question while holding the cup between their palms. This part needs to be done decisively as one should not shift questions or hesitate on the question in the middle of the rite. The shaking of the cylinder, which is usually tipped slightly downward, results in at least one stick leaving the cylinder and being dropped onto the floor. In most cases, if multiple sticks leave the cylinder, those fortunes would not count and must be shaken again. Each stick, with its designated number, represents one answer.

Once a single stick falls out, that stick will have a number on it that will correspond to a number, leading to a single piece of paper with an answer. The writing on the piece of paper will provide an answer to the question. To confirm the validity of the answer given by the deity, the querent will pick up and toss two jiaobei blocks. Each block is round on one side and flat on the other. A successful answer requires one side flat and one side round to be shown when tossed, a failed answer will result in two round sides tossed. In some practices, much emphasis is placed on denial when both sides flat are tossed; some legends that say when this happens, the deities are laughing at the querent. The querent will have the option to ask for a fortune again until a successful answer can be made.

Following a successful fortune, interpretation may be needed to comprehend the answer. Answers can be interpreted by a temple priest or volunteers or can be interpreted by the querent. In many cases, an offering is made prior to the asking of the question in order to carry good favour from the higher powers. These offerings typically consist of incense, fresh fruits, cakes, a roasted pig or fowl, or monetary donations.

Mahjong Divination is a a form of divination that uses Mahjong tiles to predict the future. History The Mahjong game is said to have originated…

Papyromancy is a form of divination through folding paper. Etymology Derived from the Greek papuros ('paper') and manteia ('prophecy') Methods A paper fortune teller, known…

Dactylomancy or dactyliomancy is a form of divination using a suspended ring. Etymology Derived from reek daktylios, a finger-ring. Methods In some traditions of dactylomancy,…

Macharomancy (also spelled as machæromancy or machairomancy) is a form of divination by interpreting knives, daggers or swords. Etymology Derived from the Greek makhaira ('dirk')…

Cromniomancy is a form of divination by means of onions. It was usually practiced on Christmas Eve to obtain information about absent persons. One method…