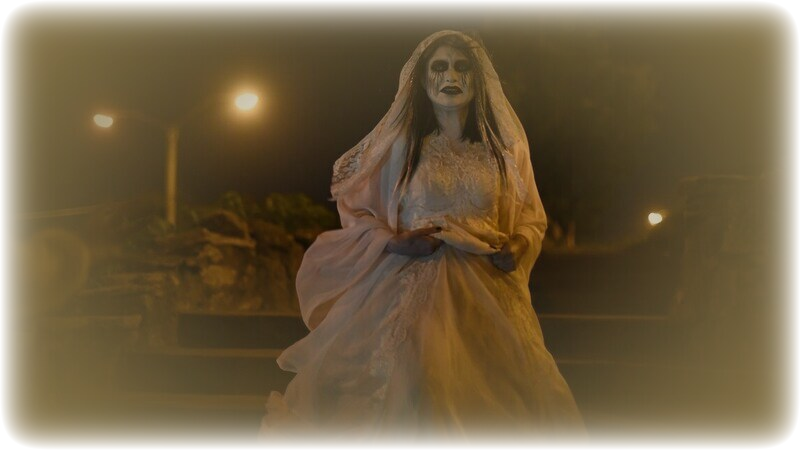 La Llorona (also called The Weeping Woman) A spectral weeping woman who drifts about at night looking for her murdered child or children. Llorona is Spanish for “weeper.”

There are numerous versions of the Llorona legend, which also exists in the American Southwest and as far away as the Philippines. According to one version, the Ghost is searching for her lost boy and is lost herself. In another version, she murdered the boy and now wanders about demented. Or, she murdered the child and therefore is condemned to eternal wanderings as a ghost.

In still another version, she once had several children but fell in love with a man who wanted none. To please him, she drowned them all, then drowned herself. Most folklorists believe that the legend derives from Aztec mythology. The goddess Civacoatl (also known as Chihuacohuatl or Tonantzín) dressed in white and carried a cradle on her shoulders.

She walked among Aztec women and left the cradle, which was discovered to contain an arrowhead in the shape of a sacrificial knife. Civacoatl also walked the cities, screaming and crying, eventually disappearing into lakes. There may also be a historical basis for the legend. According to that story, which took place in Mexico City around 1550, Doña Luisa de Olveros, an Indian princess, fell in love with a nobleman, Don Nuño de Montesclaros.

She bore him two children (some versions say twins). Montesclaros promised to marry her, but instead married someone else. Doña Luisa visited him on the night of his wedding party and was spurned by him. Insane with rage and humiliation, she went home and stabbed her children to death with a dagger that Montesclaros had given her previously as a gift. She then wandered the streets, in torn and bloody clothing, crying for her children. She was found guilty of sorcery and was hanged.

Her ghost is said to be cursed to wander the earth forever looking for her children. La Llorona has numerous shapes and appearances. Usually she has a seductive figure and dresses either in white or black and has long black hair. She has long fingernails, sometimes described as claws. She is faceless, or has the face of a bat or a horse. She also is described as a vampire.

In the El Paso, Texas, area, she has appeared as a faceless woman in white with shiny claws. La Llorona’s mournful, shrouded ghost usually is seen by riverbanks, the woods and along deserted streets, especially at midnight, the traditional “witching hour.” Sometimes she is seen in daylight. She may not bother the living, or may ask someone if her missing child has been seen.

She often entices men when they are drunk and out and about lonely areas. As a Phantom Hitchhiker, she sometimes waits along lonely roads and tells motorists who pick her up her woeful tale of her lost or murdered child. She is feared, however, for, like the demon Lilith of Hebrew lore, she preys upon young men and kills them.

La Llorona also may be compared to the Banshee of Irish lore, in that to see her presages one’s death within a year, or, at the very least, bad luck within the year. A version of La Llorona has been reported as far north in the United States as Gary, Indiana; it may be two ghost legends, La Llorona and the phantom hitchhiker, blended into one.

A woman in white, often said to be La Llorona, has been reported drifting about Cudahey, a suburban community once largely populated by Mexican Americans who worked in the steel mills. The ghost is said to have killed her illegitimate children in Gary by drowning them in the Calumet River. She usually hitches rides to the Calumet Harbor, disappearing from the car en route. Sometimes, she is said simply to appear in a car and vanish a few minutes later.

La Llorona is witnessed roaming cities or near riverbanks on moonlit nights, dressed in white; her face often sheathed in a white veil. La Llorona means the weeping or wailing woman and sometimes she’s heard, not seen. Something in her weeping and wailing terrifies, spooks and unnerves those who encounter her.

La Llorona is a fixture of urban legends and popular entertainment and so there are now different versions and myths regarding this ghostly apparition. In recent years, her name has become a catch-all for any threatening nocturnal wraithlike woman-in-white. As with La Lechusa, the same name may be used to indicate different spirits.

The earliest documented sightings of La Llorona occurred in 1502 in the Aztec capital city, Tenochtitlan, now Mexico City and are now interpreted as harbingers of the Spanish conquest. La Llorona was witnessed wandering the streets, lamenting over the fate of her children, constantly repeating, “Oh my children! Your destruction has arrived. Where can I take you?” She would then vanish into the lake. This La Llorona is a goddess who bewails the fate of her human devotees, her spiritual children. She is most likely the goddess Cihuacoatl. Franciscan friars forbade people from uttering Cihuacoatl’s name under threat of severe punishment and so euphemisms were employed.

Recent variations of her myth describe Llorona as a factory owner’s lover/employee. She may be the victim of sexual harassment; forced into a relationship to maintain a needed job. Unbeknownst to the local populace, toxic chemicals emanating from the factory have poisoned their river. The woman drinks from this river; subsequently bearing two badly disfigured children. The factory owner rejects the woman and their children and fires her from her job, leaving her economically devastated and socially compromised.

The original Llorona is a harbinger of death and doom. She doesn’t cause it; she may even be attempting to prevent it by issuing warnings. This Llorona is a kindred spirit of the Banshee except that she wails rather than screeches. Her appearance is a warning of impending disaster to those who hear or see her. After the Conquest, La Llorona became identified with La Malinche; mistress and interpreter of Hernan Cortes. Hostility towards Malinche, popularly perceived as a collaborator, colored perceptions of La Llorona who is now frequently blamed for her children’s doom. This modern Llorona resembles a hybrid of Malinche, Cihuacoatl, Medea and Aisha Qandisha.

Encounters with La Llorona increased and the legends changed. (Alternatively different spirits are operating under the same name.) La Llorona evolved into a ghost who lures adults and children to watery graves. There are many variations on her theme but all involve a woman wailing for her dead or lost children who she may have killed. The basic theme involves a woman who has children with a man who eventually abandons her for some sort of selfish reason. In response, she drowns their children although her motivation varies depending on legend:

• She wants to win her husband back

• She wants to pay her husband back

• His abandonment has caused her to lose her sanity

• She seeks to protect the children from a life of poverty, exploitation and abuse

In some versions she then drowns herself, too but is doomed to search eternally and frantically for her lost children; drowning those who obstruct her or get in her way.

La Llorona is among the most frequently encountered spirits. Sightings now radiate beyond Mexico City throughout the Western Hemisphere. She has been encountered as far north as the United States and as far south as Peru. Her story varies depending on location; spirits haunting different locales may not be the same. She is also a staple of horror entertainment, which often ignores any of her traditional themes but presents her as just another scary, violent ghost. Traditionally, although Llorona may cause harm, she is herself a tormented, grieving soul.

The Dark Lord of Chalma and Our Lady of San Juan de los Lagos are among those traditionally invoked to protect against La Llorona. They have allegedly come to the rescue of those confronted by La Llorona.

La Llorona has evolved into a sort of boogie woman used to threaten children: parents warn their kids that if they play alone near the river or stay out after dark, La Llorona will get them. That said, La Llorona sometimes rescues children. (A benevolent Llorona is depicted in Gloria Anzaldúa’s 2001 children’s book, Prietita and the Ghost Woman.)

La Llorona is feared but also propitiated so that she will not cause harm. Goddess Llorona has been reemerging in recent years: a cult of devotion has developed in Mexico City and Honduras (places historically associated with La Malinche). La Llorona is blamed for unexpected death but has also been successfully petitioned to protect young Latina mothers, especially those in dire straits.

You’ll know her if you see her and especially if you hear her. Her wail will make your hair stand on end. La Llorona is usually described as being magnetically beautiful.

New Mexico is a favourite haunt of La Llorona, and she is often sighted along the Rio Grand. In Santa Fe, the skeletally thin wailing…

Cihuacoatl : Snake Woman Cihuacoatl, divine snake woman, is a native of the Valley of Mexico long before it was known by that name. The…

Sayona, La The Executioner ORIGIN: Venezuela Gentlemen, are you considering good reasons not to cheat on your wives? Add La Sayona to the list. La…

The phantom hitchhiker (also vanishing hitchhiker) is one of the most popular and widespread of modern Ghost legends, appearing around the world and especially throughout…