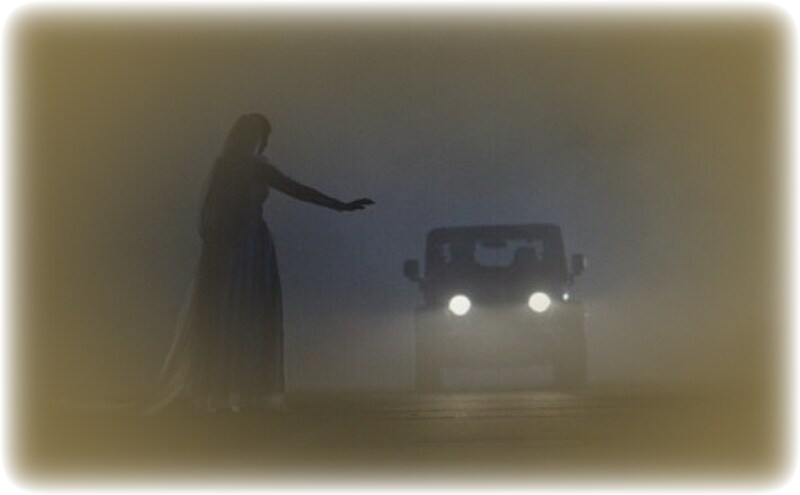 The phantom hitchhiker (also vanishing hitchhiker) is one of the most popular and widespread of modern Ghost legends, appearing around the world and especially throughout the United States. There are countless variations, and the story continues to be reported in contemporary times.

In most versions, the phantom hitchhiker is a girl or woman, sometimes in distress. She is spotted late at night, standing by the side of a lonely stretch of road. Sometimes she stands in the middle of the road, looming up suddenly in the headlights. She is often dressed in white, and if the night is stormy she is bedraggled from the rain.

The driver, who usually is a man alone, stops and asks if he can help, or where she is going. She tells him, and she always is going to the same town as he is. He offers to take her straight to her home. She accepts and gets in the backseat. He may give her his coat to keep warm.

As they drive on, the man cannot help but notice how stunningly beautiful she is. But she is painfully shy and withdrawn, perhaps even exhausted, for she rarely says another word. She may give her name. When the driver reaches the address she has given him, he stops the car and turns around in his seat, and is astonished to see that she has vanished.

Typically, she leaves behind a piece of clothing or an object, such as a book, pin, purse or scarf. The seat may still be wet where she sat. The driver goes up to the door of the house, which is answered usually by a woman and sometimes by a man and woman. The driver explains the mysterious event. He is told that it has happened before—the girl or woman is their daughter who was killed some time ago, and the night is the anniversary of her death. She was either murdered or killed in a tragic accident at about the spot where the driver picked her up.

Every anniversary of her death, her ghost attempts to come home. The driver is shown a photograph of the dead girl—she is the same one he picked up, wearing the very same clothes. Later, the driver visits her grave. If he had given her his coat in the car, he then finds it draped across her tombstone. The phantom hitchhiker may appear and pick up travelling companions at locations other than lonely roads.

Sometimes she is met at a club or dance hall and is driven home. In one version from the American South, the phantom hitchhiker is a young woman in a cemetery who meets a man walking home alone late one night. He offers to walk her to her home and she accepts. They talk along the way. Later, he decides to call on her, and he is shocked to hear from the man who answers the door that the young woman, his daughter, has been dead for 12 years.

Despite its widespread popularity in the United States, the phantom hitchhiker legend probably originated in Europe with legends of Phantom Travelers. It also appears in Asian folklore as a young woman who walks behind a man to the home of her parents, but vanishes when the destination is reached and he turns around. In America, the phantom hitchhiker legend appeared as early as the late 19th century.

It may have gained a prominent role in American lore because of the emphasis on automobiles in American culture, and the romance of the open road, especially from the mid-20th century on. There also are sexual undertones in the vulnerable female- in-distress motif. In some versions, the phantom hitchhiker story takes on characteristics of the legends of eternally wandering ghosts, such as the Flying Dutchman and La Llorona.

In 1998, ghost investigator Alan Murdie found an oral tradition of the phantom hitchhiker in Bogotá, Colombia. The story, involving a truck driver who picks up a young girl, has no firsthand witnesses.