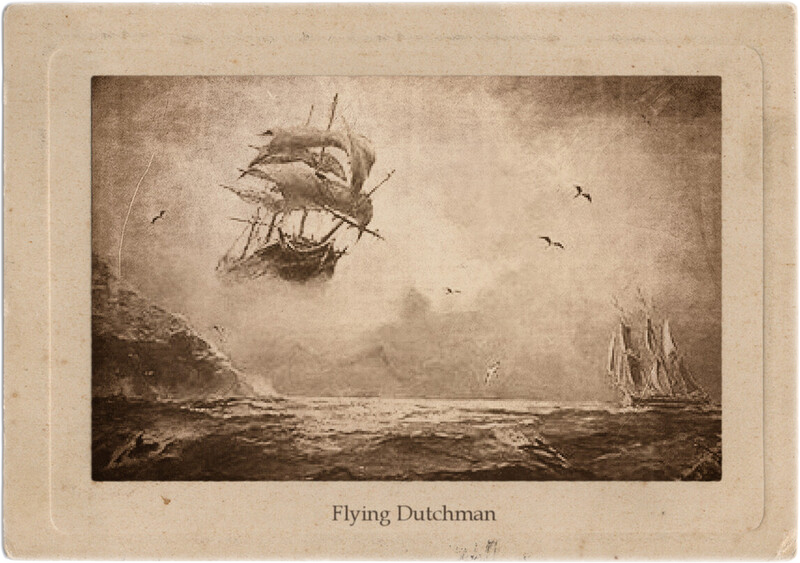 Flying Dutchman : PHANTOM SHIP legend involving a rash oath or punishment for sins or evil. It is the best known of phantom ships legends. The Flying Dutchman legend has various versions. In the Dutch version, the captain, named van Straaten, was a stubborn man who vowed to sail around the Cape of Storms, now known as the Cape of Good Hope (the southernmost tip of Africa), in bad weather.

The ship was lost, and as a result the ship, its crew of dead men and the dead captain are condemned to sail the spot forever. Their phantom vessel reportedly can be seen at the cape in stormy weather, and is an omen of disaster. In the German version of the legend, the captain is known as von Falkenberg, and he sails in the North Sea. In this tale, the Devil visited periodically and engaged the captain in a game of dice on deck, playing for the captain’s soul.

The captain lost the game and his soul and became one of the phantom condemned. In a version published in a British magazine in 1821, the ship was sailing around the Cape of Good Hope when a storm arose and the crew begged the captain to head for safe harbor. He refused and taunted them for their fear.

As the storm grew worse, he shook his fist and challenged God to sink the ship. Instantly an apparition appeared on the deck, but the belligerent captain ordered it away lest he shoot it. When the apparition did not leave, he drew out his pistol and fired at it, but the gun exploded in his hand. The apparition then cursed him to sail forever, always tormenting his crew.

Anyone who sighted the doomed ship would have misfortune. There are other variations of the legend. In one, the ship was condemned to eternal wanderings because of cruelty on the part of the captain. In another, a goddess appeared on deck one day and was treated sacrilegiously Flying Dutchman 173 by the captain. In revenge, she condemned the ship to sail forever until doomsday.

Heinrich Heine, the great German writer, romanticized the Flying Dutchman story. Heine injected the element of redemption by allowing his captain to go ashore once every seven years in order to try to regain his freedom by winning the hand of an unsullied maiden. Composer Richard Wagner took this version for his opera Die Fliegende Holländer. Wagner called the captain van Derdeeken, and the maiden to whom he makes advances, Senta.

An apparition of a phantom derelict ship believed to be the Flying Dutchman was seen at the Cape of Good Hope in 1923. It was witnessed by four seamen, one of whom reported the incident years later to Sir Ernest Bennett, a member of the Society for Psychical Research (SPR). Bennett included the account in his book Apparitions and Haunted Houses: A Survey of the Evidence (1934). According to Fourth Officer N.K. Stone, the apparition was sighted at about 15 minutes past midnight on January 26, 1923. Earlier in the day, the ship, en route from Australia to London, had left Cape Town. Stone wrote:

About 0.15 A.M. we noticed a strange “light” on the port bow; . . . it was very dark night, overcast, with no moon. We looked at this through binoculars and the ship’s telescope, and made out what appeared to be the hull of a sailing ship, luminous, with two distinct masts carrying bare yards, also luminous; no sails were visible, but there was a luminous haze between the masts.

There were no navigation lights, and she appeared to becoming close to us and at the same speed as ourselves. When first sighted she was about two-three miles away, and when she was about a half-mile of us she suddenly disappeared. There were four witnesses of this spectacle, the 2nd Officer, a cadet, the helmsman and myself. I shall never forget the 2nd Officer’s startled expression—“My God, Stone, it’s a ghost ship.”

Stone drew a picture of the ship, which he kept for many years. His account was corroborated for Bennett by the second officer; the other two seamen could not be located. In attempting to explain what causes such Apparitions as this, Bennett agreed with Frederic W.H. Myers that some form of consciousness survives death and is capable of telepathically projecting images, including those of material objects, to the living, which are perceived as phantoms. If such were the case, then the Flying Dutchman apparition was an image projected telepathically by her dead crew. The telepathic projection theory has since been discounted as a plausible explanation of apparitions.

The Flying Dutchman is a ghost ship that, according to legend, supposedly appears to sailors as a sign that some tragedy is about to occur. There are many variations of the story of the ship’s origins, though in most versions the ship was said to be captained by a Dutchman who sailed around Cape Horn, the southern tip of South America, during a tremendous storm despite the passionate objections of his crew. In one version of this story, as the sailors prayed for divine help, a spirit appeared and the captain cursed it, then fired several shots at it. In another version, the spirit appeared after the captain said that even God could not sink his ship; the captain then told the spirit to leave and tried to shoot it (but his gun blew up instead of firing), whereupon the spirit cursed the captain and his ship. In either case, the ship was doomed to an eternity of sailing the seas and, according to some stories, of bringing misfortune to all who see it. For centuries, sailors have reported seeing the Flying Dutchman right before a tragedy. For example, on July 11, 1881, thirteen crewmen on a British warship, including Prince George (later King George V) of England and his brother Prince Albert Victor, saw a phantom ship with a strange red glow approach the port bow and then suddenly vanish. The royal brothers later wrote in their journal that they believed the apparition to be the Flying Dutchman, particularly since after the sighting a lookout on their ship fell to his death from a mast, and the admiral commanding the ship died of a mysterious illness.

The Palatine light is a phantom ship, seen off Block Island, Rhode Island, in the North Atlantic waters. The story of the Palatine, like many…

A belief once prevailed in the western districts of Cornwall that Porthcurno was its principal port until the cove became ‘sanded up’. Some said this…