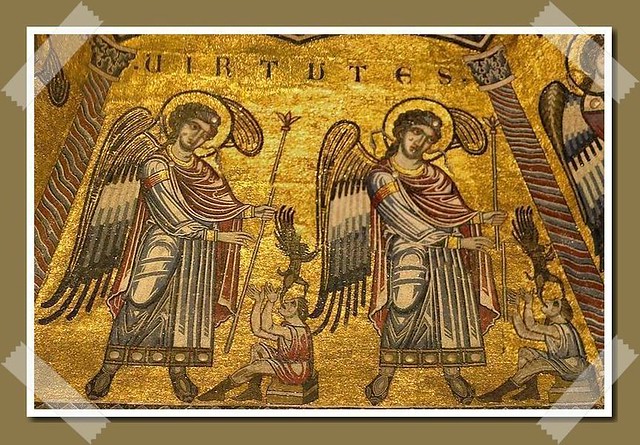 Virtues are in the Pseudo-Dionysian hierarchy, the ﬁfth highest order of angels, whose name means “powers,” especially in relation to performance of miracles and Magic. The primary tasks of virtues are to execute miracles on earth and provide courage, grace, and valor. According to PSEUDO-DIONYSIUS, virtues are one of the 10 orders of the blessed. They carry out the instructions of the DOMINIONS. Through virtues, God governs the seasons, elements, and heavens, though lower orders of angels have direct responsibility for those tasks. The angels of the ascension are virtues. According to the Life of ADAM AND EVE, two virtues (EXCELLENCIES) and 12 other angels helped Eve to prepare for the birth of Cain. Angels who rule the order of virtues are Barbiel, Michael, Peliel, Raphael, and Uzziel, and Satan prior to his fall. AGRIPPA says that humans receive power from virtues that strengthens them and enables them to constantly ﬁght the enemies of truth. Virtues are equated with MALACHIM and TARSHISIM in Hebrew lore, and they are sometimes referred to as “the shining ones” or the “brilliant ones.” In Kabbalistic lore, virtues—along with dominions and POWERS—form one of four triplicities of intelligible hierarchies. See DYnameIS.

Taken from : Encyclopedia of Angels by Rosemary Guiley