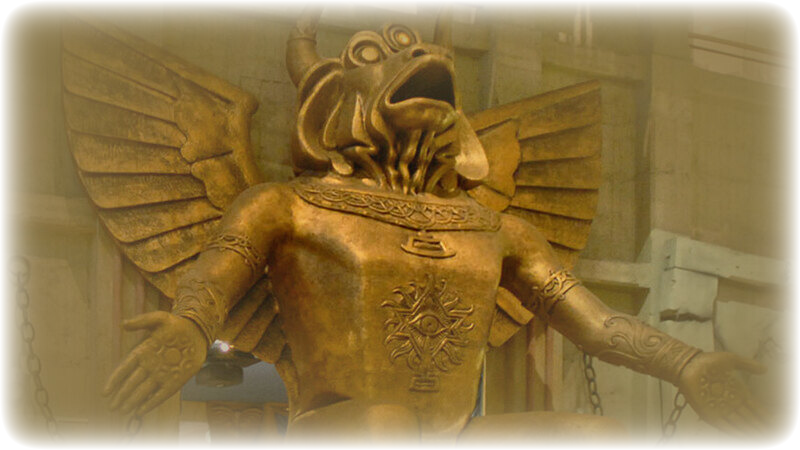 Moloch is an Ammonite god Demonized in Hebrew lore. Moloch was probably identified with BAAL, and with the Assyrian/Babylonian Malik. King Solomon was said to have built a temple to Moloch.

To the Ammonites, Moloch was a Sun god and personified the detrimental effects of the Sun’s rays. He also was the cause of plagues. He was depicted as a bull-headed man with long arms sitting on a brass throne. Huge bronze statues of him were erected in his honor, and he was worshipped with human sacrifice rites in the belief that the people would be protected from disaster. The victims were thrown into fires built in hollow bellies of the bronze statue.

Moloch was called “the prince of the valley of tears,” a reference to Topheth in the Valley of Hinnom, where the sacrificial rites were said to take place. King Jeremiah defiled Topeth, and the sacrificial practices declined. The Hebrews called Moloch “the abomination of the Ammonites” (1 Kings 11:7).

In Kabbalistic lore, he is, with Satan, the first of the evil Demons of the Tree of Life. The ancient Greeks associated Moloch with Cronos, the god of time, who devoured his own children in order to prevent them from challenging his rule.

The Encyclopedia of Demons and Demonology – Written by Rosemary Ellen Guiley -Copyright © 2009 by Visionary Living, Inc.

Moloch: Originally a Canaanite deity, Moloch became famously demonized in the Bible through a passage in 2 Kings 23 :10. This passage describes how children were consecrated to Moloch and cast into flames as a sacrifice. According to demonographer Manfred Lurker, the name Moloch itself may be derived from a Punic root MLK, meaning “offering” or “sacrifice.” From this, he suggests that Moloch may not have originally been a proper name, and was instead a formal term for this kind of sacrifice. Regardless of its roots, the name Moloch, through its association with child sacrifice, was rapidly adopted into demonology. According to a demonic hierarchy found in Waite’s treatment of the Grand Grimoire, Moloch holds the title of “Prince of the Land of Tears.” Like several other demons in this hierarchy, Moloch is also associated with Beelzebub‘s knightly Order of the Fly. He is said to have been awarded the Grand Cross of the Order of the Fly. Although A. E. Waite credits the origin of these titles to Wierus in his 1910 publication The Book of Black Magic and Pacts, the real source is Les Faifadets by Charles Berbiguier. Interestingly, Berbiguier includes two versions of the biblical demon Moloch in his hierarchy: the demon Melchom is mentioned along with Moloch. Moloch is a Greek transcription of the Hebrew Molech, and in other parts of the Bible it is variously rendered Melchom and Milcom.

The Dictionary of Demons written by Michelle Belanger.

Edited and revised for the Web by Occult Media, the 23rd of April 2021. We use British English spelling.

Go Back to the Previous Page

Melchom: A duke who commands thousands of lesser spirits, Melchom serves the mighty king Baruchas in the north. This spirit will not manifest to mortals…

The Demon Adramelech (Adramalek) is a chieftain of Hell. Adramalech is of uncertain origin. Possibly he was derived from a Samarian Sun god worshipped by the Sepharvites, who burned children as a sacrificial offering to him.

Les Farfadets: The three-volume autobiography of Charles Berbiguier, a Frenchman who claimed to have been locked in a desperate struggle with the forces of Hell…

Nybbas: Chief Mimic and one of the Masters of Revels, Nybbas appears in the Waite translation of the Grand Grimoire published in his 1910 work,…

Microchip: In A. E. Waite’s version of the Grand Grimoire, Misroch is identified as the Grand Steward of the Royal Household of Hell. Although Waite’s…