Numismatomancy is a form of divination that predicts the future by the use of coins.

Derived from the Greek nomisma ('coin') and manteia ('prophecy')

Around 700 BC, the Lydians produced the first coins which were made of electrum, a natural alloy of gold and silver. At first, they were crude bean-shaped lumps with official symbols stamped on them.
By 550 BC, coins had spread to all the major trading centers of the world, including Spain, Gaul and Britain. Peasants, even as late as the Middle Ages, handled coins only very rarely, so coins themselves became objects of almost mystical reverence. Images of rulers and gods were stamped on them to encourage the people to associate the virtues of the gods with those of their kings. Alexander the Great had coins minted with his image and those of the gods of each country he conquered. Many of the Roman Emperors, such as Augustus, Caligula, Claudius and Nero, were deified by their subjects and their different images on the coins became objects of reverence, especially in distant provinces such as Britain.

In ancient Greece and Rome, coins were associated with both birth and death and were placed inside a sash bound to a newborn child's abdomen to prevent the umbilical hernias. These coins were also intended to serve as the start of the child's wealth and so parents would give coins of the highest value that they could afford. The Romans placed coins, often the same coins given to the child at birth, under a dead person's tongue and in the hands to allow the shade to pay Charon the ferryman for passage across the river Styx to the gates of the Underworld. This custom persisted until long after the end of the Roman Empire.

There are many methods of divination using coins. One from the East uses the I Ching – the Book of Changes. The inquirer tosses three identical coin and, depending on the way the coins fall, draws a line of a hexagram. The complete hexagram is drawn after throwing the coin five more times. The meaning of the hexagram is found by consulting the I Ching.
A more traditional Western method from the Romans, uses three different coins. Traditionally, the first coin should be gold representing the Sun. The next should be silver, to lock in the Moon's rays. The third should be copper or bronze, symbols of the Earth. Since gold coins are expensive nowadays, try purchasing a large silver coin and a smaller silver coin from a coin dealer. Try not to use nickel coins, as the recent discovery of nickel means that they lack an organic link with mankind and do not resonate as close to your emotional frequency as gold, silver and copper coins do.
The gold (or large silver coin) represents your spiritual, mental and physical well-being – your life force and your relationship with yourself. The silver coin represents your relationship with others – friends, enemies, lover or spouse. The copper or bronze coin represents your relationship with your environment – your material well-being, money and success.
This method works best if the coins have been on you long time, especially if they touched the skin near your heart as this causes the coins to resonate at your aura's emotional frequency. The longer you keep the coins on you, the better the coin divination work. Place a soft cloth on a small table in a quiet, dimly lighted room. You can also do coin divination while sitting on a patch of earth, since the earth itself is a great source of power. Sit down, lightly clothed, and hold the coins in your cupped hands over the cloth. Close your eyes and concentrate on the matter on which you are seeking guidance. Try to induce a state of mental relaxation while thinking a specific question, related to your spiritual well-being, your relationships with others or your material well-being. Keep this up until the question fills your entire mind. If your question is about a person or object, try to visualize the person or object surrounded by a blue aura because blue is a powerful color, as we can see from its position in the spectrum. Open your hands and let the coins fall. Note the positions with respect to you and which face lands up. Should one of the coins roll off the cloth, you are being offered a dire warning.
If the observe lands facing upwards, the indication is positive. If the reverse lands upwards, the indication is negative. The positions of the other two coins are also important. The closer they are, the stronger their influence will be. For example, suppose you want to invest in a certain company and you decide to consult the coins.
You throw the coins and the copper coin lands close to you, obverse up. The small silver coin also lands close to you, reverse up, while the large silver coin lands far away from you, facing up. This means that there is a strong probability you will do well financially out of the deal. However, you will risk hurting or even ruining your relationship with someone close to you. Spiritually, it will affect you positively but only slightly. Your health might improve slightly.
Another example: suppose that you are about to begin a relationship with someone and consult the coins about this relationship. The copper coin lands close to you, reverse up. The silver coin lands close, reverse up, and the small silver coin lands at a medium distance, reverse up. This means that both your spirituality/bodily health and your financial welfare will suffer badly as a result of this relationship.

According to the legends, Croesus, King of Lydia, lost his country and freedom by disregarding the omens of coin divination and allying himself with the wrong nation. The great Carthaginian general, Hannibal, used coins to predict the success of his journey across the Alps but, being too confident in his military skills, he neglected to consult the coins about his eventually unsuccessful campaign against the Romans.

Creighton, John – In his volume Coins and Power in Late Iron Age Britain (2000), Creighton draws on neuropsychological analyses of rock art to argue…

Ardoksho ALSO KNOWN AS: Ardoxsho ORIGIN: Bactrian; Kushan The Kushan Empire once stretched from Afghanistan to Northern India. For several centuries in the early Common…

Often referred to as Pentacles, the Suit of Coins is usually represented by golden disks inscribed with a Pentacle. In the Book of Thoth it… 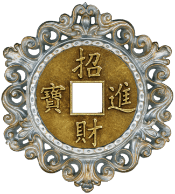 The I Ching (Yijing) is an ancient system of Chinese wisdom, often consulted for oracular Divination. The I Ching, which means “Book of Changes,” consists…

In folklore, money that comes from Fairies, witches, sorcerers (see sorcery) and the Devil turns out to be worthless. The victim accepts payment for goods…