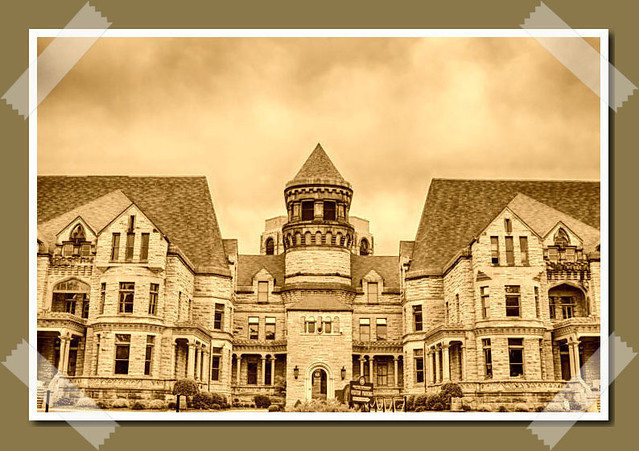 Built in 1886, the Ohio State Reformatory was designed to humanely rehabilitate first-time offenders and was initially applauded as a positive step toward prison reform. However, conditions rapidly deteriorated. After 94 years of operation, the prison’s legacy became one of abuse, torture, and murder. Now, within the decaying walls of this abandoned prison, the restless spirits of its prisoners and workers are said to still remain confined. The imposing architecture, modeled to resemble old-world German castles and Victorian Gothic churches, succinctly conveys the atmosphere of the prison. Inmates recall deplorable conditions, including rats, inedible food, and disease. Violence among prisoners was an everyday way of life. Tales are told of inmates being sliced by shanks, beaten by soap bars, or thrown from six-story walkways, all over petty grievances. One African-American inmate reported being disciplined by being placed in a “sweatbox,” a special type of torture that white prisoners escaped. But perhaps the most terrifying prospect for prisoners was “The Hole”: an area of solitary confinement cells equipped with nothing but a toilet and where prisoners sometimes had to sleep on the bare concrete floors. On one occasion, following a riot, approximately 120 prisoners were confined to “The Hole” for 30 days, with only 20 rooms to hold them. During this time, at least one inmate was alleged to have been murdered, his body hidden by other inmates under some bedding for several days. Prisoners were not the only victims. In 1948, escapees brutally murdered a farm warden’s family. In 1950, the warden’s wife died under “mysterious circumstances.” She had allegedly died after a gun accidentally fired while she was searching for items in her closet. The warden later suffered a heart attack at the prison and died soon thereafter. Denounced by civil rights activists for its “brutalizing and inhumane conditions,” the prison eventually shut down in 1990. After taking over ownership of the prison in 1995, the Mansfield Reformatory Preservation Society (MRPS) unsealed the prison for ghost tours. Since the prison opened its gates to the public, it has been considered among ghost Great Lakes 127 hunters as one of the most active haunted places in the United States. Paranormal investigators have captured numerous orb photographs and haunting EVP. Many report unexplained cold spots and equipment malfunctions. One of the most active areas of the prison is the warden’s administration section. Here, visitors report hearing the voices of the warden and his wife. The faint smell of perfume can be sensed in the “Pink Room,” the warden’s private bathroom. Others report activity in the prison’s Chapel and, of course, sense an ominous presence in “The Hole.” Currently, the MRPS holds regularly scheduled overnight ghost tours for those brave enough to explore the remains of this dark, foreboding prison. A schedule of the tours can be found by accessing the MRPS Website.
Written by —Stephanie Lane Webmistress, DeadOhio.com