A poppet is amagical doll made for spell-casting and ritual magic.

In spell-casting, the doll substitutes for the person who is the object of the spell. The doll is carefully made in a state of concentration that focuses on the purpose of the spell. Ideally, the doll has things belonging to the subject, such as bits of clothing and snippets of Hair and Nail clippings. The latter especially are believed to magically link the person to the spell because they contain the living essence of a person. In earlier times, if personal items were not available a kite would be flown over the subject’s chimney to catch the soot, or essence, of the occupants. The soot would then be placed inside the poppet as a substitute. Animal hair also was used for poppet stuffing.

Life is breathed into a poppet by blowing into the doll’s mouth through a straw. Thus the poppet takes on a magical life of its own and activates the spell.

If the spell is a Curse, such as illness, misfortune or death, or a binding spell to stop someone from a particular activity, the poppet is pierced with pins, nails or shards of glass, or bound with cord, covered with burning candle wax or even hung by the neck. Sometimes poppets are buried after being activated. Photographs can substitute for a doll and be similarly mutilated. A poppet to stop an illicit love affair might have its heart and genitals pierced and legs bound together.

In the Salem Witches trials, several of the accused were said to have made use of poppets to harm and kill others. George Burroughs supposedly made Abigail Hobbs stick pins into poppets he gave her. brIdget bIshop, Goody Hawkes and Hawkes’ slave, Candy, supposedly stuck pins in poppets to inflict pain at a distance on their victims.

Judge John Hathorne ordered Candy to produce one of her poppets in court. It was made mostly of rags and grass. He made Candy eat the grass, and then he burned the rags. One of the afflicted girls screamed that her hand was being burned at the same time, so the flames were put out.

Two men who worked on Bishop’s house testified that they found several poppets inside a wall. They were made of rags and hog bristles, with headless pins stuck into them. The poppets seemed to validate testimony that Bishop had bewitched people to death and had caused many problems with her evil spells.

Not all poppets have negative purposes. For example, they are made for healing, prosperity and love spells as well. A healing poppet might be attached with certain herbs, stones or crystals intended to facilitate the healing.

The museum oF Witchcraft in Boscastle, Cornwall, England, has an extensive poppet collection that includes a good luck and protection poppet made for the home. The poppet had been walled into a chimney of a cottage and was discovered during restoration work. The chimney, as part of the hearth, represents the heart and wellbeing of the home.

In ritual magic, poppets are substitutes for aspects of God and Goddess and used in rituals and to activate certain energies. One of the most common poppets for such purposes is the Biddy or Bridie Doll, made at Imbolc (see Wheel of the Year) in honor of St. Bride and to welcome spring. There are variations of the ritual, such as those described below.

The Bridie Doll is made as much as possible from natural materials, for example twigs and straw for the body, pinecone for the head, rushes for hair, pebbles for eyes, silk for the dress and shells for decorations. Traditionally, this construction is done by women.

When the doll is made, a Bride song is sung to call in Goddess energy for fertility and healing, especially of the land. The doll is then placed in a decorated carriage and taken to a home adjacent to her final destination, where she will be given to the land. All of the ritual participants enter the home except the one who carries the doll. The door is knocked upon three times and the doll is welcomed in three times, entering upon the third. She remains in the home overnight and then is given to the land.

In Glastonbury, England, the ritual has been done by placing the doll in a darkened room. Children, each carrying a candle, enter the room and a welcome song is sung to the doll. The doll is taken to the Chalice Well garden, a natural springs area associated with the legend of the Holy Grail.

A paquet is in Vodoun, special types of Charm bags held to have great therapeutic powers. A paquet is a small flannel bag that contains… 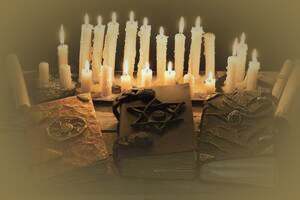 A wanga is in Vodoun ( Voodoo ) , a Curse or Hex made with a Poppet. A wanga is negative and even vampiric in…

Pins are used in some magical spells and in sympathetic Magic. Stray pins always should be picked up, according to superstition; otherwise a witch will…

glamour A type of Bewitchment in which things or people are made to seem better than they are. In Celtic magical lore, a Spell for…