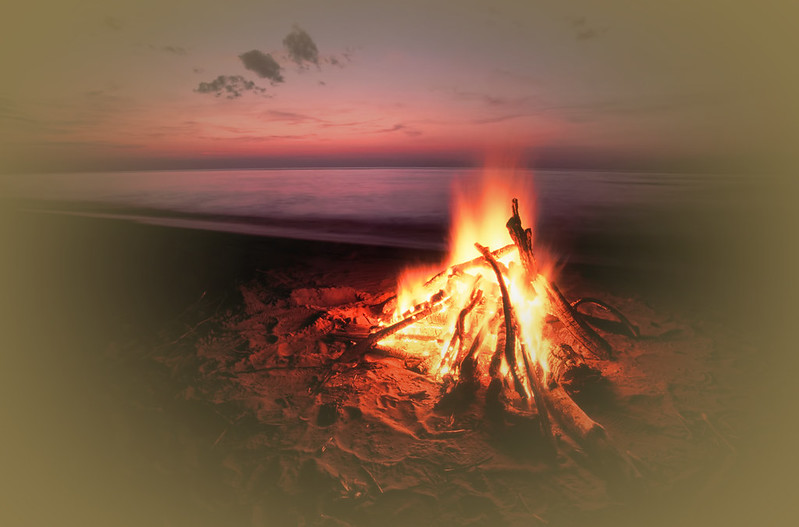 Pyromancy is the divination with flames or fire. The most basic form of pyromancy is that in which the diviner observes flames, from a sacrificial fire, a candle, or another source of flame, and interprets the shapes that he or she sees within them. There are several variations on pyromancy, however, some of which are as follows:

Derived from the Greek pur ('fire') and manteia ('prophecy')

Pyromancy is considered as one of the earlier forms of divination since fire is very important in society from the earliest of times. There were speculations that in Greek society, the virgins at the Temple of Athena in Athens regularly practiced pyromancy. The followers of Hephaestus, the Greek god of fire and the forge, also practiced pyromancy. In ancient China, pyromancy was practiced in the Neolithic period and Shang and Zhou dynasties in the form of burning or heating oracle bones like scapulae (shoulder blades) of oxen or turtle shells to produce cracks that were interpreted.

Pyromancy was embodied in the ancient practice of extispicy. A good presage was indicated when a vigorous flame quickly consumed the sacrifice; when it was smokeless, transparent, and neither red nor dark in color, and did not crackle but burned silently in a pyramidal form. An evil presage, however, was indicated if the fire was difficult to kindle, the wind disturbed it, and it was slow to consume the victim.
Besides sacrificial fires the ancients also divined by observing flames of torches and by throwing powdered pitch into a fire; if it caught quickly, the omen was good. The presage of a torch flame was good if it formed one point, bad if it was divided into two, better than one if forming three. The presage of the bending of the flame signaled sickness for the healthy, death for the sick and frightful disaster if the flame extinguished.

There was also a vegetable form of pyromancy which was encouraged by the Pythagoreans in preference to animal sacrifices because they disapproved of any shedding of blood. At Delphi for example, the smoke of the incense and the crackling of the laurel-wood and barley in the flames were observed by the priests.

With ordinary fires, omens were obtained by throwing substances such as powdered peas or pitch upon the flames; the more rapidly these were consumed, the better. In northern climes, where winter nights were long, these traditions carried on through the Middle Ages and were common to every hearth and home. Sudden sparks from knotty logs, colored flames from burning driftwood, curious shapes caused by flames or smoke, all were accepted as omens, good or bad.

Deities associated with the practice

Capnomancy, also known as Libanomancy, is a method of divination by interpreting the movement of smoke rising from a fire, principally sacrificial fires. Etymology From…

Plastromancy is a form of divination using the plastron, or undershell of a turtle. Etymology Derived from the English plastron and Greek manteia ('prophecy') History…

Scapulimancy Scapulimancy (also known as scapulomancy, scapulamancy, or omoplatoscopy) is a divination of the future by observation of the cracking of a mammal's scapula or…

Sideromancy Sideromancy is a branch of pyromancy or divination by fire, based on the interpretation of the flame, smoke, and pattern of straws that were…

Causimancy Causimancy or Causinomancy, a form of Pyromancy, is an ancient system of divination that draws omens by observing objects placed in a fire. Etymology…