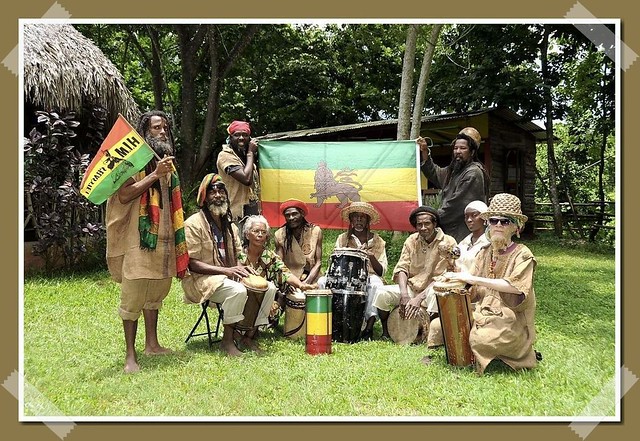 Rastafarians are Members of a religious movement that began in Jamaica among people of African descent. They are also called Rastas. The name Rastafarian comes from Ras (prince) Tafari, the name of the former emperor of Ethiopia, Haile Selassie (1892–1975), before his coronation.

The Rastafarian movement was inspired in part by a movement led by another Jamaican, Marcus Garvey (1887–1940). Garvey preached black pride and advocated the return of black people to Africa. The coronation of Haile Selassie in 1930 ﬁlled many black people with hope for political and economic independence. Indeed, many Rastafarians have seen him as God’s messenger on earth.

The best known Rastafarian aspects are the wearing of dreadlocks, the use of ganja (marijuana), and reggae music. Dreadlocks, with roots in the Nazarite vow in the BIBLE (Numbers 6), mark the Rastafarians as distinctive; they have a number of symbolic resonances, starting with the beauty of a black person’s hair. The sacramental use of marijuana, Rastafarians believe, allows them to connect with one another and their deeper selves.

Much reggae music incorporates Rastafarian themes and as a result has been important in spreading the movement. These symbols (see SymbolISM IN RELIGION) receive their meaning from a deeper vision. Rastafarians see themselves as living in exile in Babylon. Forces of the surrounding society—the former British rulers, the cultural and economic dominance of the United States, the structures of Jamaican society, and traditional Christian churches—oppress black people.

Rastafarians reject those forces and celebrate Africa, especially Ethiopia. Traditionally, they have seen Africa as a paradise to which black people will one day return. That return will mark the end of their suffering. Like Jews and Muslims, Rastafarians do not eat pork. Some of them are vegetarians. They have been active in promoting black political and economic power. Although they first arose in Jamaica, today Rastafarians are found in most places where people of African ancestry live.