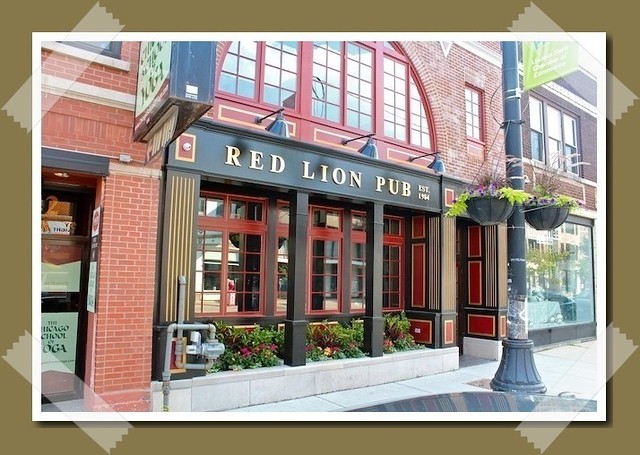 Red Lion Pub reputed to be the most haunted eating and drinking establishment in Chicago. Numerous visitors and patrons have reported a wide range of haunting phenomena at the Red Lion, but the identities of the ghosts remain uncertain.

The Red Lion opened in 1984, in a building on the north side of Chicago that dates to 1882. In its previous incarnations, the place was a grocery store, illegal gambling parlor, and a Western bar called Dirty Dan’s. The second and top floors of the building were once divided into apartments. The building is located across the street from another famous haunted Chicago landmark, the BIOGRAPH THEATER.

Hauntings were known at the location when the place was Dirty Dan’s, owned by Dan Danforth. Danforth experienced the resident ghosts and sometimes invited local businessmen over to experience them as well.

When John Cordwell bought the place and turned it into a British-style pub he had no expectations of ghostly phenomena. After Cordwell died, his son Colin and sonin- law Joe Heinen took over the establishment.

Phenomena began during renovations from Dirty Dan’s to the Red Lion. After work hours, tools went missing or were scattered about, and work that had been done was ruined. John Cordwell installed a stained glass window over the main stairway, along with a plaque commemorating his father, who had died in England. Thereafter, Cordwell sensed the presence of his father at that spot. Curiously, people walking past the spot on the sidewalk experienced a light-headed sensation.

After the pub’s opening, the second-floor apartments were removed to make additional dining space. These renovations seemed to increase the haunting activity, especially noises when no one was upstairs: heavy footsteps and the sounds of furniture being moved about or overturned. Inspections always revealed nothing amiss. Once a crashing noise was heard. A cricket bat that had been hanging on the wall was found lying on the floor.

Other phenomena include a smell of lavender perfume on the second floor, icy spots, and the apparitions of a blond man, a bearded man in a black hat, and a man in cowboy clothing. The last is thought to be the ghost of Dirty Dan himself, who had been evicted from the building and had sworn revenge. Once John Cordwell was pushed down the steps by an invisible force; he, too, thought the culprit might have been Dirty Dan. The ghosts have been heard calling out names and are believed to toss items about upstairs.

Three deaths in the building in the past have been documented. An elderly couple with a daughter lived in one of the apartments. They died there, as did their mentally disabled daughter, who was known for wearing lavender perfume.

The Italian Bride is a ghost of a young woman whose body was found to be inexplicably undecayed six years after burial. Julia Buccola Petta,…

Saint Valentine’s Day Massacre Bloodiest and most spectacular of the Prohibition era gangland killings in Chicago. The site where the killings took place is one…

Smells are distinctive, unusual, and out-of-place odors are one of the most common phenomena associated with Hauntings. Often the smells have historical documentation, such as odors related to activities that took place at a site or tobacco or perfume used by someone who is believed to be a Ghost.

McPike Mansion House in Alton, Illinois, called the “most haunted” site in the region where the Mississippi and Missouri rivers meet. In deteriorated condition, the…