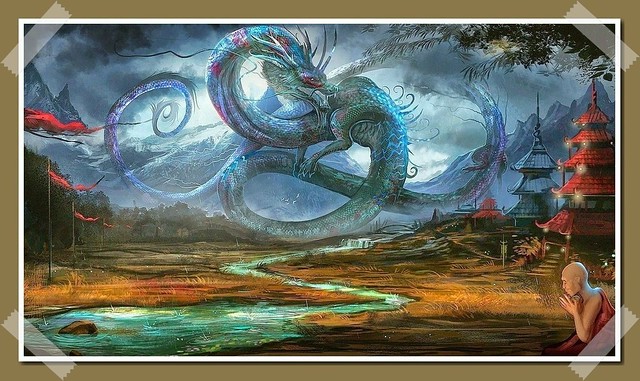 Ryujin, Japanese Dragon King of the Sea, rules an underwater realm from his luxurious palace at the bottom of the sea. He is known as a gracious host who welcomes guests to his home. His palace, known as Ryugu and constructed from crystal and coral, is rumored to be located near Japan’s Ryuku Islands.

Ryujin is served by an entourage of sea creatures, including octopi, jellyfish, and turtles. He is incredibly wealthy, bestowing fertility, good health, and prosperity to those he favours. Ryujin rules the tides and controls storms and is invoked for safety on land and sea.

Ryujin is a shape-shifter who can appear as a man or a dragon.

Ryujin is portrayed as a dragon or as an old bearded man. A dragon coils around his neck or back.

The tide jewels, which magically control the tide’s ebb and flow.

His daughter Toyotama-hime and Raijin