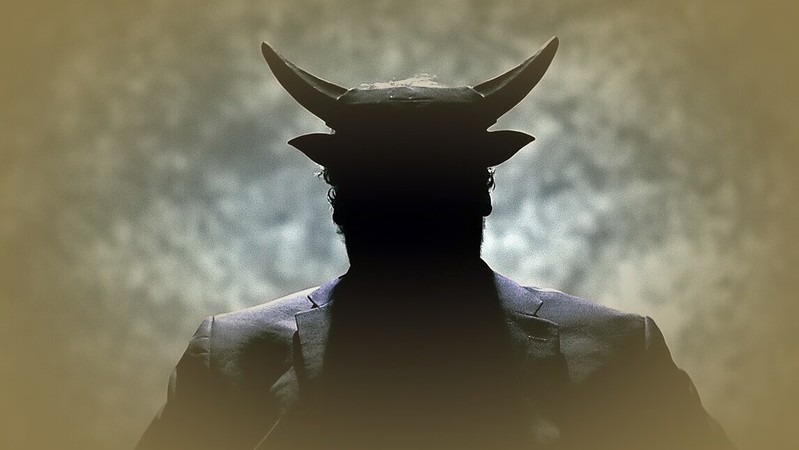 Satan
The personification of evil and the head of all Demons. He is equated with the Devil. Satan is a Hebrew word meaning “adversary” and originally was not a proper name. Satan has evolved over the centuries to become the opposite and the opponent of God, the Prince of Darkness, and the subverter of souls. His goal is turn to human beings away from God so that they become condemned to eternal torment in Hell.

Satan, as the proper name of a being, makes scant appearance in religious texts prior to the New Testament. There is no mention of “the” Satan, or even “a” satan in Genesis. The Serpent who tempts Eve is not equated with Satan. The Old Testament features a variety of satan adversaries, including an angel adversary in the story of Balaam and the ass in the book of Numbers; lying spirits; and, in the book of Job, a satan, who is one of the SONS OF GOD, and who walks the earth looking for people to test concerning their devotion to God. In the case of the pious and devout Job, God gives the satan permission to test him, and he suffers years of setbacks, disasters, and losses. A satan, as an accuser, is mentioned in the book of Zechariah. In 1 Chronicles, a satan stands up and challenges David to take a census of the people. Psalm 109 refers to wicked men as satans, and they should be punished by Yahweh.

In the New Testament, Satan becomes more personified as a particular, single entity, and the terms Devil and Satan are used interchangeably. The Gospels tell of Satan’s testing Jesus in the wilderness. In Mark, he is named as Satan; in Matthew and Luke, he is “the tester” or “the Devil.” In Luke, the Devil promises Jesus earthly glory if he will pay the proper homage. In Luke 10, Jesus comments that he has seen Satan “fallen like lightning from the sky,” a reference similar to the fall of Lucifer in Isaiah that is probably a prophecy of a fall to come, not one that occurred in the past. Luke also states that Satan entered into Judas to induce him to betray Jesus.

The Gospel of John makes references to the Devil. In the first, he is the “man-killer from the beginning” who does not stand for Truth, a reference often taken to refer to the serpent in the Garden of Eden. Jesus refers to him as the Ruler of the World. The Devil and Satan are both mentioned in reference to entering into the heart of Judas. The Epistles refer to both the Devil and Satan. Paul refers to Satan by name as obstructing his efforts to spread the gospel, as a tester of men’s morals and faith, and as an agent of punishment for the wicked. In 2 Corinthians 2.10–11, Paul indicates that Satan has his own designs on the world, and that forgiveness will outwit Satan. In the same letter, Paul urges people to be on guard against Satan, who can disguise himself as an angel of light. He also says that an “angel of Satan” has been sent to batter him, to prevent him from becoming too puffed up with his own pride. Paul did not see Satan as marshaling an army of Demons; rather, he said that Demons were the lifeless idols of the pagans. In Ephesians, Paul gives advice for spiritual armaments against Satan and warns that committing sins will make room for him. In Hebrews, Satan has the power of death, and it is Christ’s mission to overcome him. In Revelation, Satan is synonymous with the dragon and serpent. He tests people, battles angels, and is punished and bound.

The early church fathers did more to cement the identity of Satan with the Devil and the tempter in the Garden of Eden, and with Lucifer. In the second century, Justin Martyr was the first to identify Satan with the serpent. He said the fall of Satan at the hands of Christ was predicted in Isaiah in the description of the fall of Lucifer. Justin also linked Satan with the Sons of God, or Watchers, and associated the powers and principalities (two orders of angels) of the Epistles with pagan gods and Demons.

Other church fathers, such as Theophilus and Tertullian, also placed Satan as tempter in the Garden. According to Cyprian, the Devil was once a beloved and intimate angel of God, who perished at the beginning of the world out of envy over humanity. In losing his own immortality, he took away the immortality of humans. Irenaeus echoed this view.

Origen (ca. 185–250) was the first church father to reinterpret Satan within the context of Lucifer.
The Life of Adam and Eve, a pseudepigraphal text written around 100 A.D., states that the angel Satan was ordered by the archangel Michael to bow down and worship Adam, made in the image of God, but he refused because Adam was inferior, saying that Adam ought to worship him. The angels under Satan also refused, and God cast them all out of heaven. Muhammad was influenced by this text and retells the story in the Qur’an 10 times; the Devil is named Iblis, who is head of the Djinn.

The idea that Satan was cast down because of his refusal to worship Adam did not take hold in Christianity, however. Satan is jealous of humans, but only after his fall. Satan later became identified with gods of paganism. The idea was developed that Satan had rights over humanity and the world because of the sin of Adam and Eve; redemption was made through Christ, who paid off the debt with his own life. According to St. Augustine, Adam’s sin meant that the whole of humanity fell under the servitude of Satan.

In the Middle Ages, legends and hagiographies of the saints were popular, offering many stories of saints besting the Satan and his Demons and curing Demoniacs of their Possession.

St. Thomas Aquinas, one of the greatest and most influential theologians of the church, saw only one Devil, Satan, and never referred to “devils” in the plural unless he was quoting other writers. Aquinas said that the only two sins angels can commit are pride and envy, for all other sins are related to physical appetites. According to Aquinas, Demons have no possibility of redemption and can only go to hell (where they torment the dead) or Smoggy Air (where they torment the living). He said human beings deserved to be turned over to Satan because of Adam’s sin.
At some point—the origins are unclear—Satan became the ruler of hell and the chief tormenter of souls of the dead. From the 16th century on, his primary role was tempter of humanity.

The artist William Blake saw Satan as the imagination, a view also held in Sufism.

Even by the 18th century, Satan seemed an outdated superstition to some theologians, among them the influential Daniel Ernst Schleiermacher (1768–1834), a minister in the Reformed Church. The concept of the Devil was unenlightened, he argued, pointing out that Jesus and the disciples made few direct references to Satan. Schleiermacher argued that Satan does not exist and is used as a convenient metaphor for evil. Since the mid-20th century, belief in Satan has risen, in part the result of the rise of fundamentalism, and of interest in Demonic Possession.

Satan's number is six, six being the number of “the beast” representing mans carnal nature being set free. Releasing the wolf within if you want…

The word “Lucifer” in Isaiah 14:12 presents a minor problem to mainstream Christianity. It becomes a much larger problem to Bible literalists, and becomes a…

As a religious institution consecrated by and literally acknowledging the Prince of Darkness, the Church of Satan enjoyed an inspiring, and occasionally either thrilling or…