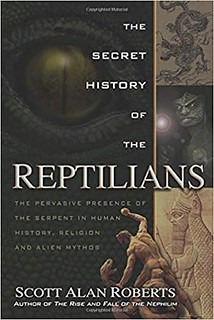 Where the bloodlines of the Nephilim leave off, the real story just begins.

Or does it go back even further than that?

The very real probability that non-human intelligences visited and even copulated with primordial humans is detailed in civilization’s most ancient cultural and religious records. These historical records further reveal that these intelligences were reptilian in nature–or, at the very least, have been represented throughout human history in reptilian form.

From the Serpent, Nawcash, in the Garden of Eden; Atum, the Egyptian snake-man; and Quetzalcotl, the feathered serpent god of the Mayans to the double-helix snake symbol of Enki/Ea in ancient Sumerian literature, the serpent has been the omnipresent link between humans and the gods in every culture.

In The Secret History of the Reptilians, Scott Alan Roberts investigates and examines the pervasive presence of the serpent in human history, religion, culture, and politics.

Are we the product of an extraterrestrial race that moves and breathes–and even breeds–beneath the surface of all of human history?

Put on your thinking cap and take an historical, anthropological, archaeological plunge into the heady waters of extraterrestrial origins.

History is written by the winners—and the powerful—but how much of it is fiction? And who is really in control today? From the dawn of…

The idea of extraterrestrial life, which dates back at least to the ancient Greeks, has become one of the most persistent themes of Western civilization.…

With his recent best-selling books and hundreds of articles, as well as radio and TV appearances, Philip Gardiner has started a crusade for uncovering the…

The Shekinah is the manifestation of the Wisdom Goddess of the Kabbalah,the Old Testament and Merkavah Mysticism. She encompasses the primordial light of creation, the…

The Sumerians, the pragmatic and gifted people who preceded the Semites in the land first known as Sumer and later as Babylonia, created what was…