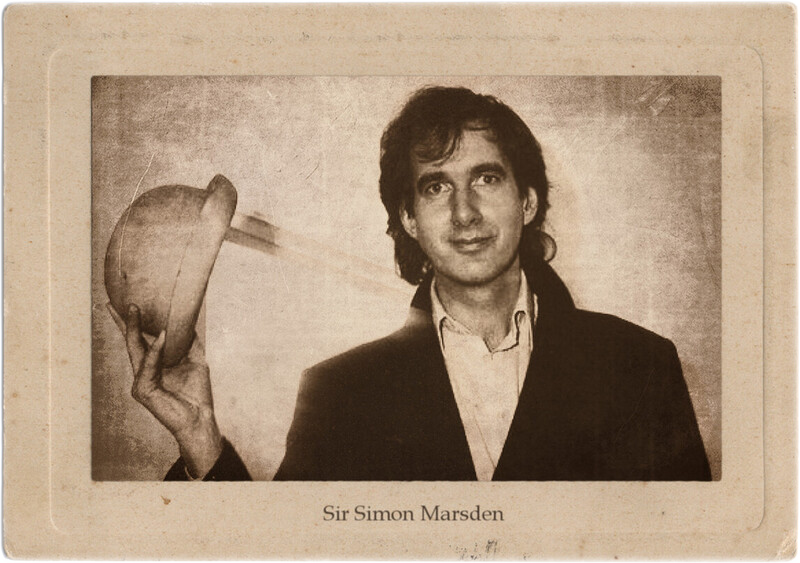 Sir Simon Marsden has had a lifelong interest in ghosts and the paranormal, an interest shared with his father. Born December 1, 1948, in Lincoln, England, he grew up in two stately homes with reputations for being haunted. Both Panton Hall and THORPE HALL were in remote areas near the Lincoln Wolds. Thorpe Hall, near Louth, has been haunted since 1596 by the Green Lady, the ghost of a Spanish woman who pined in unrequited love for the hall’s married owner, Sir John Bolle. The Marsden family lived at Thorpe Hall when Simon was between the ages of five and 13. His bedroom was the haunted one, but he never experienced the Green Lady or any other ghost. A phantom coach was seen by his older brother and sister. His father and older brother were avid readers of Ghost stories, and Marsden eventually inherited the library of books on the subject.

Marsden was educated at Ampleforth College, Yorkshire, and the Sorbonne University in Paris.

When he was 21, Marsden received a gift of an old Leica camera from his father. He shot his first roll of film using cardboard cutout ghosts set up in the garden. From the beginning of his experiments in photography, Marsden was fascinated by the play of light and by showing the unreality of the real and the reality of the unreal. The same year, he started his career in photography as a printing and processing assistant for two professional photographers in London. From 1971–73, he worked for a photographic printing business and travelled extensively throughout Europe, the Middle East, and America.

Over a 12-year-period, Marsden photographed more than 1,200 homes and buildings. He looked especially for places in remote areas where legends and folklore have remained strong. Many of the sites he has featured are in Ireland, a land still filled with appreciation for the unseen.

Marsden was the subject of a 1992 documentary drama produced by Granada TV, Ghosthunter, which featured him on travels through Transylvania. He has appeared on numerous other television and radio programs. His work is exhibited in galleries and museums around the world. He lives with his family in Lincoln.

A feature film of his book The Twilight Hour: Celtic Visions from the Past was released in 2002. Marsden narrates the film, which explains his experiences photographing mysterious places.

Marsden has never attempted to prove the existence of ghosts, but sees his role as that of a folklorist collecting and recording the experiences of others, in the hopes of restoring a sense of imagination and mystery increasingly lost to science and technology. He finds from his own experiences and research that the evidence in support of ghosts and other paranormal phenomena is overwhelming. A hidden spirit world runs parallel to our waking reality. It is revealed to us under the right conditions and if we are receptive to it by conquering our fears of the unknown. Marsden’s own openness to this hidden realm may account for the striking results he achieves through a camera lens, and for the strange experiences and synchronicities that happen to him in the course of his work.

For example, in 1979, Marsden visited the village of Long Compton, Oxfordshire, to photograph an ancient mound in a field near a church that had been used for witchcraft rituals. Long Compton is near the haunted ROLLRIGHT STONES. His camera was slung around his neck. As he raised it to look through the viewfinder, it suddenly was wrenched from his hands by an invisible force that seemed to give him a great blow. He felt as though he had been struck by a thunderbolt. Shaken, he hurried back to his car. He later discovered that his shoulder was covered with a huge bruise, though he felt no pain. This sort of strange experience that has no apparent explanation is familiar to many ghost investigators.

Marsden favours two explanations that have been proposed for ghosts:

• The “Tape Recording” theory, which holds that human emotions can become imbedded in the electrical fields of certain inanimate objects such as stone and wood.

• The “Earth Force” theory, which holds that primal energy radiates from the Earth and is conducted along ley lines. At points where lines intersect, psychic activity is high. Sacred sites, churches, stone circles, burial chambers, and such have been constructed at these points and along ley lines and are focal points for paranormal activity. In his introduction to The Haunted Realm, author Colin Wilson proposes that Earth force may have been the source of Marsden’s experience in Long Compton.

Marsden also thinks that ghosts may be—at least in part—projections of the subconscious fears of death and extinction shared by human beings. The manifestation of ghosts may serve to alleviate those fears and assure humans of some form of continuity of existence.

Other books by Marsden include Visions of Poe (1988), an illustrated personal selection of stories and poems by Edgar Allan Poe; Phantoms of the Isles: More Tales of the Haunted Realm (1990); The Journal of a Ghosthunter: In Search of the Undead from Ireland to Transylvania (1994); Beyond the Wall: The Lost World of East Germany (1999), about the forgotten castles, palaces, and schlosses of the former German Democratic Republic; Venice: City of Haunting Dreams (2001); The Twilight Hour: Celtic Visions from the Past (2002), made into a feature film released the same year; This Spectred Isle: A Journey Through Haunted England (2005); and Ghost Hunter: A Journey Through Haunted France (2006).

For examples of Marsden’s work, see the entries on CHARLETON HOUSE and NEWSTEAD ABBEY.

Thorpe Hall Haunted stately home in the western side of Louth in Lincolnshire, England. Thorpe Hall is renowned for its Green Lady, the ghost of…

It was no doubt thanks to its combination of hoary antiquity and later neglect that Waxham Hall acquired the reputation of being haunted. By the…

The Charlton House is a former stately home in Greenwich, London, with active haunting phenomena. Now a municipal building, Charlton House has been the site…

Be afraid. This unusual collection of true ghost stories and hauntings has been put together by Simon B. Murik, who is the son of a…