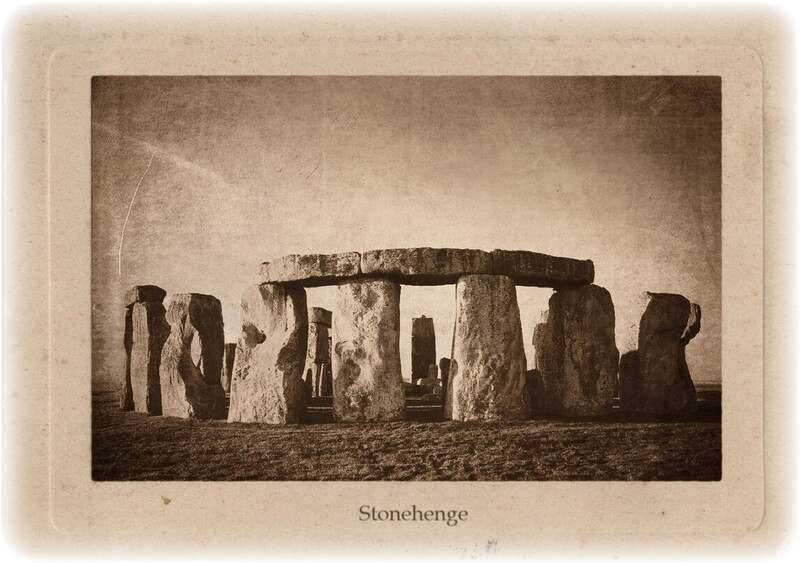 Stonehenge Located about 80 miles (129km) west of London, England, on the Salisbury Plain near the town of Wiltshire, Stonehenge is an ancient monument that some people believe has magical powers and/or marks a site where the Earth emanates mysterious healing energies. The monument once consisted of two concentric rings of upright stones, with additional stones at the center of and outside of these rings. The stones at the center are lined up to create two horseshoe-shaped groupings, one inside the other; the stones outside the circle are solitary rather than grouped. In addition, the stones in the outer horseshoe and in the outer circle are capped with horizontal stones, so that they appear to form a series of doorways. The outer circle of “doorways” is approximately 100 feet (30m) in diameter and 16 feet (4.9m) tall; archaeologists believe it once contained thirty upright stones and thirty doorway caps, but many of the stones are now broken or missing.

One of the enduring mysteries of Stonehenge is how the enormous stones, which are of either a bluestone known as dolerite or a sandstone known as sarsen, were moved to the site. The bluestone apparently came from a Welsh quarry about 130 miles (209km) away, the sarsen from a site 20 miles (32km) north of Stonehenge. In ancient times, these distances would have been significant since there were then no wheeled vehicles in England and some of the stones weighed more than 50 tons (45.4 metric tons). No one knows how the builders of Stonehenge managed to move stones of such weight.

Another mystery is who these builders actually were. Ancient peoples as far away as the Maya in Central America or the ancient Egyptians, or the Phoenicians, in addition to Druids, Greeks, or Romans, have been considered to have been the architects. Others have suggested that the builders were from the lost civilization of Atlantis or from another planet. During the twelfth century in England, the prevailing belief was that the uncle of King Arthur erected the stones during the fifth century, with the help of magic furnished by the wizard Merlin. This uncle, as well as King Arthur’s father, were said to be buried within the stone circle, which was thought to be a monument to dead warriors.

There have been many other theories regarding why Stonehenge was constructed. Today most people believe that it was used as an ancient temple, and that it might have been an astronomical calendar as well. The first to connect Stonehenge to the celestial sphere was British astronomer Sir J. Norman Lockyer in his 1906 book, Stonehenge and Other British Stone Monuments Astronomically Considered. His work was widely rejected, though, until the 1960s, when Boston astronomer Gerald S. Hawkins used a computer to show that the stones were placed in ways that would have allowed the ancients to predict lunar eclipses and other celestial events.

In the 1970s and 1980s, researchers of paranormal phenomena attempted to show that Stonehenge was also a site of unusual geomagnetic forces that have the power to heal. Their work seemed to show that the site had a fluctuating magnetic field, as well as other unusual energies, but others have criticized their methodology and equipment. Other people have noted energy fields at Stonehenge using a process known as dowsing, which involves seeing whether a stick or piece of wire tingles or twitches when it is pointed at a particular object or plot of ground. Dowsers who have visited Stonehenge say that they have been jolted with Earth energy so powerful that, in some cases, it knocked them unconscious. Skeptics call this claim nonsense.

America’s Stonehenge has always been shrouded in mystery (hence the pseudonym Mystery Hill). Located deep in the woods of Salem, New Hampshire, this 4,000-year-old megalith…

Avebury The most important and oldest megalithic henge in Britain, predating the Druids with active use between 2600-1600 b.C.e. Avebury is said to be the…

Earth energy is said to be a force that emanates from the earth at certain locations and can enhance human well-being in various ways, such…