Morrigan, the In Irish mythology, one of three war goddesses, the other two being Neman and Macha. She also was the mighty Queen, viewed either as a Triple Goddess or the death aspect of the Goddess. Robert Graves gave three aspects of the morrigan: Ana, Babd and Macha.

In legend, the Morrigan protected the Tuatha de Danaan (see Fairies) with a cover of fog and rain so that their boats could land upon the shore of Ireland. On battlefields, she appeared as a raven or scald crow, eating the bodies of the dead. She could present a winsome side that hid her secret intentions of destroying someone, or she could be openly vengeful. She fell in love with Cuchulain, the heroic son of Lugh but was rejected by him. In anger, she harassed him on the battlefield, then tried, in vain, to save his life.

The Morrigan sometimes is associated with the three phases of the moon—waxing, full and waning—and with the maiden, matron and crone aspects of the Goddess.

The Morrigan is a powerful spirit of birth, death, sex, destruction, and fertility. She is among the goddesses associated with Ireland’s well-being and sovereignty. Her name is variously translated as “Great Queen,” “Sea Queen,” “ Phantom Queen,” or even “Terrifying Queen. ” She is an oracular, prophetic spirit who can reveal the future and anyone’s destiny—that is, if she feels like it. The Morrigan is a headstrong, passionate goddess who does as she pleases. She is among those goddesses serving as Washers at the Ford.

• The Morrigan may be one spirit.

• The Morrigan may be a triple goddess (a trinity: three manifestations of one).

• The Morrigan may name a triad of distinct goddesses—usually Badbh, Nemain, and Morrigan, but sometimes Macha is included.

The Morrigan is most famous as a war goddess. She may instigate battle or meddle with it. The concept of minding her own business does not exist: Battle is her business. Anything that captures her interest is her business. The Morrigan is also renowned for giving sound battle advice. She advised the Dagda on how to deal with the Fomorians.

The Morrigan determines war’s outcome, bestowing victory to whichever army or warrior she favours, but she has a reputation for being capricious. Her favours can never be taken for granted. Her frenzied war-fury unnerves armies. Her shriek is deadly.

More than just a battle goddess, the Morrigan is also a goddess of life, birth, and sex. She is sometimes identified as a mermaid. On Samhain, the beginning of the Celtic dark half of the year, the Morrigan stands astride a river with one foot on either bank to engage in the Great Rite—sacred, transformative, ritual sex—with the Dagda (Ireland’s All-Father).

Her many manifestations include, but are not limited to:

• A white heifer with red ears and no horns

• A black eel long enough to coil three times around the legs of Cu Chulain, a giant man

Creatures: The Morrigan owns a herd of enchanted, magical cattle.

Day: Samhain (the night of 31 October and 1 November) 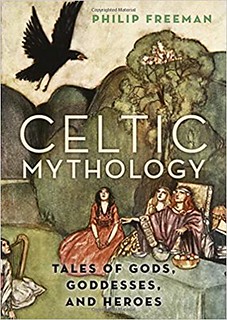