[dropcap]F[/dropcap]or years, people spoke of an old sea captain—some say maybe even gentleman pirate Jean Lafitte himself—who willed his land to his children and asked them to keep it in the family. But eventually one of his heirs sold the land, against the captain’s wishes, making his spirit angry. This was the land Ewing Hall was built on.

The urban legends surrounding the identity of the original landowner range from a pirate to historical figures from Galveston’s history. But the presence of the face on the building is difficult to deny. This is an awesome picture on a building with some questionable facts surrounding it.

Ewing Hall was built upon an accretion into the bay. The state essentially piled up silt and used it for construction, so the story of a prior landowner is urban legend.

According to fellow researcher, Jerry Drake:

“I was working on a file regarding land about three miles or so east along the bay from UTMB. It struck me as odd that this survey was in the name of William A. A. Wallace—the famous ‘Bigfoot’ Wallace from Texas history. He’s not typically associated with Galveston Island. And that’s when it hit me…the face looks like Bigfoot Wallace. According to research, he, his attorney, and an adjoining canal company had a hell of a time getting their land out of the state of Texas. Perhaps this is Bigfoot’s way of taking revenge.”

When granted access to Ewing Hall for a television shoot, shots were taken of the exterior, and Channel 2 Houston broadcasted the photo you see below, only enhanced slightly to bring out “the face.” Nothing was added or subtracted to create the image. Upon further investigation, a medium pointed out that they felt that the death of a child happened on the spot, and that the face was the last thing that the child saw. Upon looking into crime records in that area during the time period given by the psychic, the search came up as inconclusive, although 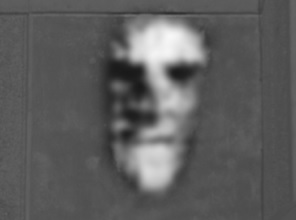 there were missing children reports from the area at the time. In December of 1992, while trying to look at the face, a nurse lost her life in a strange automobile accident caused by her own hand, only adding to the legend. This property is posted “No Trespassing,” so if you want to see it for yourself, you will have to gain permission from the University.

Back to Haunted Texas