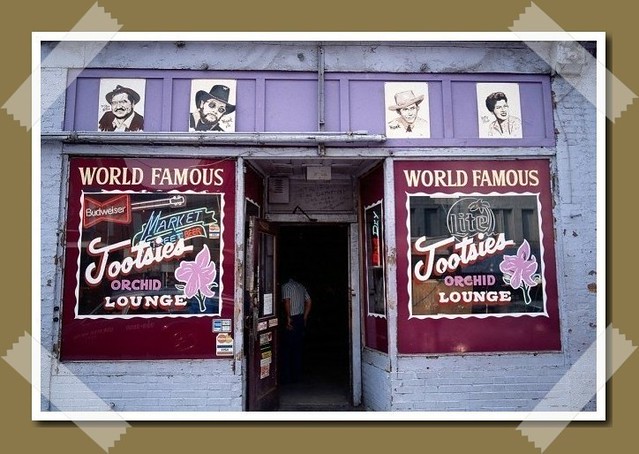 Because of its proximity to the Ryman Auditorium, just across an alley, Tootsie’s became the “green room” to many Grand Ole Opry performers, and it’s possible that some of them are still hanging around waiting for their next performance.

Purchased by Tootsie Bess in 1960, the bar originally opened as Mom’s, but Tootsie was soon inspired by a local painter to change the name. After hiring the gentleman to paint her establishment quickly but cheaply, Tootsie came to work one morning to find her place painted orchid—thus the name, Tootsie’s Orchid Lounge.

Famous early customers included Kris Kristofferson, Willie Nelson (who received his first songwriting job after singing his original songs at Tootsie’s), Faron Young, Tom T. Hall, Waylon Jennings, Patsy Cline, and many more. Charlie Pride, another Tootsie’s regular, was said to have given Tootsie the jeweled hatpin that she used to stick unruly patrons with, and it’s rumored that Roger Miller wrote “Dang Me” about his exploits at Tootsie’s.

An early customer of Tootsie’s was Hank Williams Sr., and many believe his spirit still visits the honky-tonk on a regular basis. Shortly after Tootsie’s opened, numerous customers began reporting seeing the lanky country singer sitting at the bar ordering a drink.

Some years ago, a patron took a photo, later published in a national magazine, of the front stage that included a plasmic mist said to resemble Williams. The figure appears to be playing a guitar and singing. But the bar isn’t the only thing haunted at Tootsie’s.

Kristofferson and Nelson both lived in the upstairs rooms at an early point in their respective careers, and both reported more than one instance of unexplained noises and figures. The alley between Tootsie’s and the Ryman is also the scene of an occasional encounter, with a patron seeing the ghost of Williams there in September 2002. Hank Sr. was said to be wearing slacks, a long-sleeved white shirt, and cowboy boots.

The polite ghost vanished before the startled man’s eyes. Tootsie Bess was well-known and wellloved in the country music business. She would hire down-on-their-luck writers and pickers so they could support their families, feeding them while they worked, and often slipping $5 and $10 bills in their pockets as they left for the night.

She kept a cigar box full of IOUs from those very same artists under the counter, and it’s said that, at the end of every year, grateful Opry performers would band together to pay off those IOUs so that Tootsie could afford to stay in business.

Though she passed away in 1978, employees say Tootsie is still at her beloved honky-tonk, watching over the hopeful artists and wannabe songwriters, appearing when a new singer takes her fancy.

Back to Haunted Tennessee