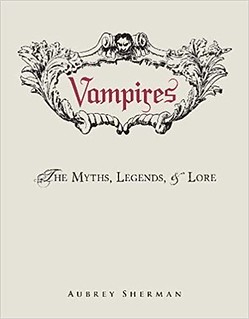 A thrilling treasury of vampire lore!

Since the seventeenth century, people have been frightened, mesmerized, and fascinated by the terrifying tales of vampires. In this book, you’ll uncover the history and mystery behind these bloodthirsty monsters with folklore, mythology, and poetry from every tradition in the world. From the Bosnian Lampir, whose disease-ridden corpse spread infection and death throughout villages, to Bram Stoker’s charming Dracula, who helped define modern-day vampires, the wicked stories surrounding these nocturnal beings are sure to captivate anyone who has ever wondered about these shadow-loving creatures. Whether you’re interested in exploring the culture of vampires or just want to learn more about their supernatural abilities, you’ll discover dozens of compelling tales, historical accounts, and haunting legends that shed some light on these sinister beings.

Complete with detailed illustrations, Vampires reveals the dark allure and gruesome power of these creatures of the night.

An enchanting treasury of fairy lore! Around the corner, behind the bushes, and just out of sight…fairies have spent hundreds of years weaving their way…

Vampires are the most fearsome and fascinating of all creatures of folklore. For the first time, detailed accounts of the vampire and how its tradition…

Before Twilight and True Blood, even before Buffy and Anne Rice and Bela Lugosi, vampires haunted the nineteenth century, when brilliant writers everywhere indulged their…