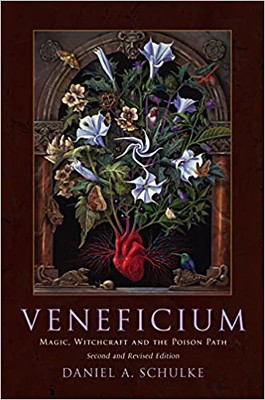 In many esoteric traditions, there exists an iconic or linguistic corollary between the concepts of ‘poisoner’ and ‘sorcerer’, suggesting a sinistral magical kinship. Indeed, the use of plant, animal and mineral toxins is a strand of magic originating in remotest antiquity and reaching the present day. Beyond its mundane function as an agent of corporeal harm, poisons have also served as gateways of religious ecstasy, occult knowledge, and sensorial aberration, as well as the basis of cures. Allied with Samael, the fallen serpent-angel of first transgression whose Hebrew name in some translations is ‘Venom of God’, this facet of magic wends through the rites of ancient Sumer and Egypt, penetrating European Necromancy, Alchemy, the arcane the rites of the Witches’ Sabbath, and modern-day folk magic.

VENEFICIUM concerns the intersection of magic and poison. Of particular note to this study are the herbs of the so-called ‘Devil’s Garden’, which bear relation to the allied witchcraft concepts of the Graal of Midnight, the Witches’ Supper, and the flying ointment of the witches which has exerted fascination over scholars, historians, and practitioners alike. Beyond consideration of the toxicological dimensions of magical power, the related threads of astral and philosophical poisons are also examined, and their resonance and dissonance with magical practice explored.

VENEFICIUM will be of interest to students of magic, witchcraft, alchemy, botanical folklore, medicine, and occult pharmacology.

In a culture where the supernatural possessed an immediacy now strange to us, magic was of great importance both in the literary and mythic tradition…

Drawing upon long experience in the Western esoteric traditions, C. L. Zalewski has gathered a wide range of materials on the planetary zodiacal and elemental…

A warlock is a term for male witches, though most men in contemporary Witchcraft prefer to be called Witches or Wiccans like their female counterparts.…

Learn the basics of Witchcraft from a third-generation Witch raised in a family tradition. Positive, practical, and easy to use, Green Witchcraft brings together the…