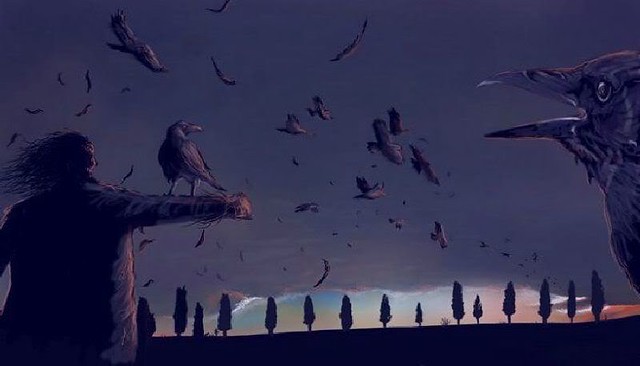 Augury is a type of Divination involving the interpretation of signs in nature. Augury is based on the belief that spirits or the divine inhabit everything in the natural world and can reveal divine will concerning human decisions and actions. Augurs study and interpret cloud formations, eclipses, weather conditions, the behavior of animals and birds, and other things found in the natural world. Sometimes the behavior of people are augured as well. Such signs are called auspices, which reveal divine favour. Augury was especially important in ancient Rome, where it was viewed as a science. The Romans adopted augury from the Etruscans.

At first an oral tradition handed down through generations grew in importance and became institutionalized. During the Roman Republic, augurs taught and practiced at formal colleges. They were instrumental in determining the auspices for matters of state such as elections, ceremonies, and war declarations. Their readings were kept in secret archives. The augurs assisted priests in conducting ceremonies. They were responsible for keeping the Sibylline books, a collection of prophecies made by oracles.

Roman weather augurs were blindfolded to do readings and thus relied on their intuition and psychic ability. They would travel to a site with a magistrate and listen as the magistrate described what he saw in nature. They would then give their interpretation. One of the most important auspices was lightning, which the Romans considered to be direct communication from the primary god, Jupiter. Where lightning appeared in the sky determined whether the auspices were good or bad.

The most auspicious lightning appeared in the northwest, followed by the east. Lightning in the west was a bad sign, and the worst of all was the northwest. Roosters were favoured for animal augury. A circle was drawn in the dirt and marked into pie sections, with a letter of the alphabet in each section. Feed was scattered over the circle. The augur asked a question and then watched as a rooster ate his way around the circle, thus spelling out the answer.

Roman augurs eventually were superseded in importance by haruspices, diviners who examined the entrails and livers of sacrificed animals. Many people in modern times practice informal augury when they look to signs in nature to help them with decisions and for validation. The flight of a certain bird overhead, the appearance of a certain animal—these may have personal meaning for the individual. Such auspices today are often regarded as synchronicity, but in earlier times were forms of divination.