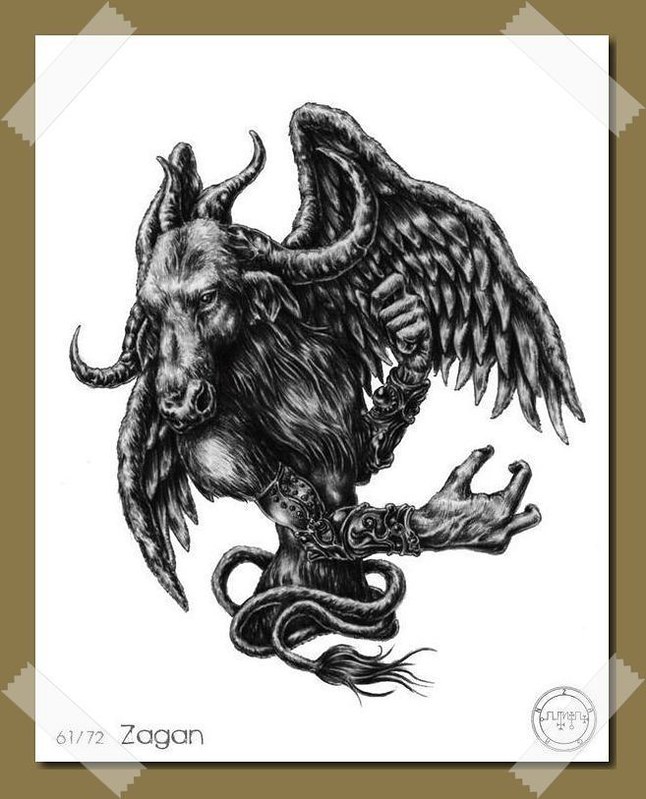 The Demon Zagan is a Fallen Angel and 61st of the 72 Spirits of Solomon. Zagan is a president and king who appears, first as a bull with griffin wings and then as a man.

He makes men clever and witty, turns water into wine, blood into oil and oil into water, and wine into water or Blood.

Zagan can turn any metal into money and can make fools wise. He commands 33 Legions of Demons.

ZAGAN. – The Sixty-first Spirit is Zagan.

He is a Great King and President, appearing at first in the Form of a Bull with Gryphon’s Wings; but after a while he putteth on Human Shape. He maketh Men Witty. He can turn Wine into Water, and Blood into Wine, alsoWater into Wine. He can turn all Metals into Coin of the Dominion that Metal is of. He can even make Fools wise. He governeth 33 Legions of Spirits, and his Seal is this, etc.

Zagam ( sic ) is a king and president, the demon of counterfeiting, deceit, and lies. Commanding thirty legions (or thirty-three, sources vary), he appears before his summoner as a bull with griffon wings. Witty by nature, he is summoned for his ability to change blood into oil, copper into gold, lead into silver, metals into coins, and water into wine. He can also make a fool into a wise man and make any man witty. He is listed as one of the Spirits of Solomon.

Zagan [Zagam] is a great king and a president, he commeth abroad like a bull, with griphens wings, but when he taketh humane shape, he maketh men wittie, he turneth all mettals into the coine of that dominion, and turneth water into wine, and wine into water, he also turneth bloud into [oil], and [oil] into bloud, and a foole into a wise man, he is head of thirtie and three legions.

Note from Occult World : In the Dictionnaire Infernal Zagan only rules 30 Legions of Demons instead of the 33 that Wier and S.L. MacGregor Mathers mention.