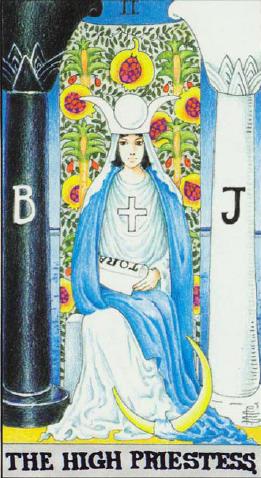 The High Priestess (II) is the second trump or Major Arcana card in most traditional Tarot decks. This card is used in game playing as well as in divination.

The High Priestess has the lunar crescent at her feet, a horned diadem on her head, with a globe in the middle place, and a large solar cross on her breast. The scroll in her hands is inscribed with the word Tora, signifying the Greater Law, the Secret Law and the second sense of the Word. It is partly covered by her mantle, to shew that some things are implied and some spoken. She is seated between the white and black pillars–J. and B. (Jachin and Boaz)–of the mystic Temple, and the veil of the Temple is behind her: it is embroidered with palms and pomegranates. The vestments are flowing and gauzy, and the mantle suggests light–a shimmering radiance.

In the first tarot pack with inscriptions, the 18th-century woodcut Marseilles Tarot, this figure is crowned with the Papal tiara and labelled “La Papesse”, the Popess.

The High Priestess has been called occult Science on the threshold of the Sanctuary of Isis, but she is really the Secret Church, the House which is of God and man. She represents also the Second Marriage of the Prince who is no longer of this world; she is the spiritual Bride and Mother, the daughter of the stars and the Higher Garden of Eden. She is, in fine, the Queen of the borrowed light, but this is the light of all. She is the Moon nourished by the milk of the Supernal Mother.

This card often appears when you are just beginning to explore occult mysteries. The High Priestess opens your third eye or inner vision and teaches you on a subconscious level. Her chant is the voice of intuition.

When you get The High Priestess in a reading, you should listen to your inner voice. The High Priestess has opened the door to enlightenment. Reading and studying new information would be a good idea. You will pursue knowledge that may not be accepted by the status quo and by doing so will become a richer human being. The High Priestess can represent a time of waiting and allowing. It is not always necessary to act to achieve your goals. Sometimes they can be realized through a stillness that gives desire a chance to flower within the fullness of time.

In the Vikings Tarot the High Priestess is Frigg, the wife of Odin. She is sitting on a throne in a swamp, with her golden slippers emitting a blinding light from the hem of her dress.

In the Golden Tarot the High Priestess is portrayed as The Papess.
In the Mythic Tarot, created by Juliet Sharman-Burke and Liz Greene, the High Priestess is portrayed by Persephone, descending a staircase into the Underworld, with the Earth behind her, dressed in white, and holding falling, white flowers. She holds up a pomegranate, both seen in her most famous myth and the Rider-Waite deck. The pillars beside her are the standard black (left) and white (right), and she also wears a crown, being the Queen of the Underworld.

The Osho Tarot calls this card Inner Voice and depicts it as a quiet person with a circle face in her center, holding a crystal in both hands and surrounded by two dolphins, a crescent-moon crown, and water.
The Asteroth Tarot depicts the High Priestess as bathed in the energy of the crescent moon.[2]

When I lifted the first veil and entered the outer court of the Temple of Initiation, I saw in half darkness the figure of a woman sitting on a high throne between two pillars of the temple, one white, and one black. Mystery emanated from her and was about her. Sacred symbols shone on her green dress; on her head was a golden tiara surmounted by a two-horned moon; on her knees she held two crossed keys and an open book. Between the two pillars behind the woman hung another veil all embroidered with green leaves and fruit of pomegranate.
And a voice said:
“To enter the Temple one must lift the second veil and pass between the two pillars. And to pass thus, one must obtain possession of the keys, read the book and understand the symbols. Are you able to do this?”
“I would like to be able,” I said.
Then the woman turned her face to me and looked into my eyes without speaking. And through me passed a thrill, mysterious and penetrating like a golden wave; tones vibrated in my brain, a flame was in my
p. 26

heart, and I understood that she spoke to me, saying without words:
“This is the Hall of Wisdom. No one can reveal it, no one can hide it. Like a flower it must grow and bloom in thy soul. If thou wouldst plant the seed of this flower in thy soul–learn to discern the real from the false. Listen only to the Voice that is soundless… Look only on that which is invisible, and remember that in thee thyself, is the Temple and the gate to it, and the mystery, and the initiation.” The Symbolism of the Tarot by P D. Ouspensky (1913)