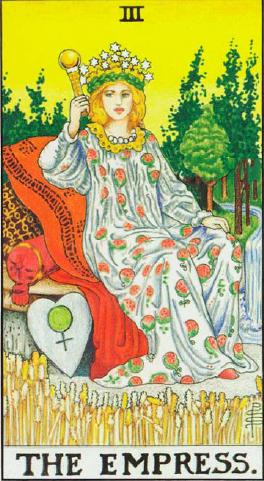 The Empress (III) is the third trump or Major Arcana card in traditional Tarot decks.

The Empress sits on a throne wearing a starry crown, holding a scepter in one hand. The Scepter is representative of her power over life, her crown has twelve stars representing her dominance over the year, and her throne is in the midst of a field of grain, representative of her dominion over growing things. The shield typically bears an eagle, the heraldic emblem of the Holy Roman Empire. The Empress Adelaide, beatified by the Catholic Church, seems a likely historical person this card may allude to.

The Empress is the archetypal Earth Mother, the Anima, the Feminine Principle, Dimeter, Freyja, Goddess of fertility. Ruled by Venus, the planet of love, creativity, fertility, art, harmony, luxury, beauty and grace.

The Empress personifies the inexhaustible power of nature, with which she continues to bring forth new life. She therefore represents liveliness, fertility, growth, and the birth of something new. She is the infinite source of all life, which expresses our creative potential and our ability to absorb impulses and let something new arise through them. This means growth and fertility on the physical level, artistic creativity on the psychological level, imagination and ingenuity on the level of the intellect, and an increase in perception on the level of consciousness.

Waite defines her as not being Regina Coeli (the Blessed Virgin Mary), but rather a Refugium Peccatorum – a fruitful mother of thousands: she is above all things universal fecundity and the outer sense of the Word, the repository of all things nurturing and sustaining, and of feeding others.The Empress is mother, a creator and nurturer. In many decks she can be shown as pregnant. She can represent the creation of life, of romance, of art or business. The Empress can represent the germination of an idea before it is ready to be fully born.

The Empress is often associated with Venus, goddess of beautiful things as well as love, and indeed the Rider-Waite deck brandishes her symbol upon a heart-shaped bolster. The Empress is also often interpreted to be Demeter, goddess of abundance. In anger she can withhold, as Demeter did when her daughter, Persephone, was kidnapped. Due to her fury and grief, Demeter keeps the Earth cold and barren until Spring when her child is returned to her.

She is also associated with Isis, both as the mistress of heaven and as the Ur-Poisoner. According to some tales, Isis achieved the queen ship of heaven by poisoning Ra with a serpent and refusing to heal him until he told her his secret name. Isis’s consort was Osiris, an example of The Hanged Man.
The Empress is closely associated with the suits of Disks (Earth) and Wands (fire/masculine generative force). She is the mistress of the Knights (12th cards of the Minor Arcana), who as Grail Knights are in some sense searching for her, and, like their counterpart in the Major Arcana, the Hanged Man, may well die for her.

In readings the Empress can refer to any aspect of Motherhood. She can be an individual mother, but as a major arcana card, she also goes beyond the specifics of mothering to its essence – the creation of life and its sustenance through loving care and attention.
The Empress can also represent lavish abundance of all kinds. She offers a cornucopia of delights, especially those of the senses – food, pleasure and beauty. She can suggest material reward, but only with the understanding that riches go with a generous and open spirit. The Empress asks you to embrace the principle of life and enjoy its bountiful goodness.
The Empress may also represent the Object of Desire. Most obviously, the love of the beloved, the love and approval of parents, especially (but not solely) mothers. While this may be healthy, over attachment to the object (or to the idea of the object) can be a danger sign.
If the Empress is the Object of Desire, the Hanged Man (or a Hanged Man substitute from the Minor Arcana) is the one who desires. This can inspire Great Works, or trap the Querant in pathology. Attachment can lead to death, metaphorically or otherwise. When The Empress kills (again, metaphorically or otherwise), it is usually by consuming, suffocating, or poisoning.
The Empress may represent the veil of illusion, Maya (illusion). In the Book of Thoth deck, she holds a lotus in her hand, associating her with the mother of the Buddha, the mother of the knowledge that transcends the world.
Reversed, the Empress suggests indecisiveness concerning others and confusion about the direction a relationship may be taking. You may also be finding it difficult to work cooperatively with others. As the reason for this lack of harmony is likely to be within yourself; introspection is called for.

In the Vikings Tarot, Saga the Empress sits on a beach with a seal, a vast ocean stretching out behind her.
In the X/1999 Tarot version made by CLAMP, The Empress is Kanoe.
In the Mythic Tarot deck, the Empress is depicted by Demeter.

I felt the breath of the spring, and accompanying the fragrance of violets and lilies-of-the-valley I heard the tender singing of elves. Rivulets murmured, the treetops rustled, the grasses whispered, innumerable birds sang in choruses and bees hummed; everywhere I felt the breathing of joyful, living Nature.
The sun shone tenderly and softly and a little white cloud hung over the woods.
In the midst of a green meadow where primroses bloomed, I saw the Empress seated on a throne covered with ivy and lilacs. A green wreath adorned her golden hair and, above her head, shone twelve stars. Behind her rose two snowy wings and in her hands she held a sceptre. All around, beneath the sweet smile of the Empress, flowers and buds opened their dewy, green leaves. Her whole dress was covered with them as though each newly opened flower were reflected in it or had engraved itself thereon and thus become part of her garment.
The sign of Venus, the goddess of love, was chiselled on her marble throne.
p. 30
“Queen of life,” I said, “why is it so bright and joyful all about you? Do you not know of the grey, weary autumn, of the cold, white winter? Do you not know of death and graveyards with black graves, damp and cold? How can you smile so joyfully on the opening flowers, when everything is destined to death, even that which has not yet been born?”
For answer the Empress looked on me still smiling and, under the influence of that smile, I suddenly felt a flower of some clear understanding open in my heart.
The Symbolism of the Tarot by P D. Ouspensky (1913)

The Emperor (IV) is the fourth trump or Major Arcana card in traditional Tarot decks. Iconography The Emperor sits on his throne, holding a scepter,…

Jingu, Empress ALSO KNOWN AS: Okinaga-tarashi-hime ORIGIN: Japan Jingu is a legendary Japanese empress now venerated as a kami. There are varying versions of her…

The High Priestess (II) is the second trump or Major Arcana card in most traditional Tarot decks. This card is used in game playing as…

Judgement (XX), or in some decks spelled Judgment, is a Major Arcana in Tarot decks. Iconography Very clearly, this card is modeled after the Christian…