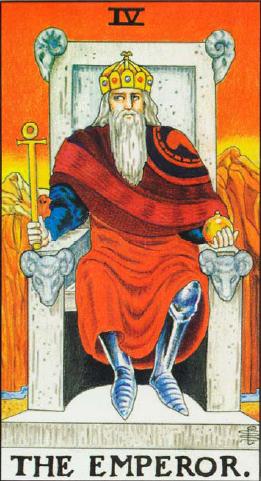 The Emperor (IV) is the fourth trump or Major Arcana card in traditional Tarot decks.

The Emperor sits on his throne, holding a scepter, accompanied by the heraldic Eagle of the Holy Roman Empire. Behind his throne are barren mountains, a symbol of the lofty heights of which he is master. The throne itself is decorated with four rams' heads, presenting him as a powerful dictator for his time and showing his potential thirst for conquering in war. His right hand holds an Ankh, Egyptian symbol of Life, and in his left is an orb representing the world over which he rules.

The Emperor is the complement to the Empress. He is the Masculine Principle, the Animus, the Patriarch. He represents power and authority; structure, order and regulation – forces to balance the free-flowing, lavish abundance of the Empress. He advocates a four-square world where trains are on time, games are played by rules, and commanding officers are respected. In chaotic situations, the Emperor can indicate the need for organization. Loose ends should be tied up, and wayward elements, harnessed. In situations that are already over-controlled, he suggests the confining effect of those constraints as well as the exaggeration thereof in the form of rigidity, lifelessness, perfectionism, a thirst for power or abusive use of strengh.

The Emperor is Key Four of the Major Arcana. Fours are stable numbers; four walls, four seasons, four corners. It takes a massive amount of energy, comparatively, to move them. The strength of The Emperor is the stability he brings. The weakness is the risk of stagnation.

The Emperor symbolizes the desire to rule over one's surroundings, and its appearance in a reading often suggests that the querent has something to overcome. The focus is on participating in society and adhering to laws and the government.
The Emperor can represent an encounter with authority or the assumption of power and control. As the regulator, he is often associated with legal matters, disciplinary actions, and officialdom in all its forms. He can also stand for an individual father or archetypal Father in his role as guide, protector and provider.

Reversed, the Emperor can suggest that there is an over-use and abuse of authoritative power surrounding you at this time or that you lack self-control, ambition, and the ability to deal with any kind of authority. Either way, you may need to bring more structure into your life at this time .

The Emperor is connected to Key 13, Death, through its cross sum (the sum of the digits). Emperors maintain their power through death and through their relationship with the other 13 of the tarot; The Queens (who legitimate their rule and bear their heirs). He is also strongly associated with Life; his scepter is an ankh, the symbol of life. But he is in the mountains, separated from the pulse of life. The sign of the Emperor is associated with the sun sign of Aries. Aries is the first sign of the zodiac and is the leader. The Emperor, like Aries, is fiery, powerful, authoritative and very egotistical.

The parallel, fourth Major Arcana card in the Osho Zen Tarot deck is called The Rebel, and carries some similar connotations.
In the Vikings Tarot Ullr depicts the Emperor. He is shown with a bow, a pair of skis, a shield, and a sleigh.
In the X/1999 Tarot version made by CLAMP, The Emperor is Kyougo Monou.
In the Mythic Tarot deck, the Emperor is depicted by Zeus.

After I learned the first three numbers I was given to understand the Great Law of Four–the alpha and omega of all.
I saw the Emperor on a lofty stone throne, ornamented by four rams' heads. On his forehead shone a golden helmet. His white beard fell over a purple mantle. In one hand he held a sphere, the symbol of his possession, and in the other, a sceptre in the form of an Egyptian cross–the sign of his power over birth.
“I am The Great Law,” the Emperor said. “I am the name of God. The four letters of his name are in me and I am in all.
“I am in the four principles. I am in the four elements. I am in the four seasons. I am in the four cardinal points. I am in the four signs of the Tarot.
“I am the beginning; I am action; I am completion; I am the result.
“For him who knows how to see me there are no mysteries on earth.
“I am the great Pentacle.
p. 33
“As the earth encloses in itself fire, water and air; as the fourth letter of the Name encloses in itself the first three and becomes itself the first, so my sceptre encloses the complete triangle and bears in itself the seed of a new triangle.
“I am the Logos in the full aspect and the beginning of a new Logos.”
And while the Emperor spoke, his helmet shone brighter and brighter, and his golden armour gleamed beneath his mantle. I could not bear his glory and I lowered my eyes.
When I tried to lift them again a vivid light of radiant fire was before me, and I prostrated myself and made obeisance to the Fiery Word. The Symbolism of the Tarot by P D. Ouspensky (1913)