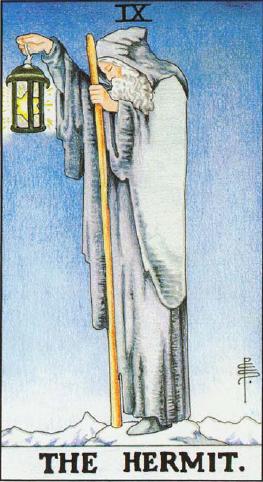 The Hermit (IX) is the ninth trump or Major Arcana card in most traditional Tarot decks.

The Waite version of the card shows an old man carrying a staff in one hand and a lit lantern in the other. In the background is a wasteland. Just beyond the wasteland is a mountain range.

The Hermit is the card of seclusion and turning within. It characterizes an introverted phase in life, during which we shield ourselves from outside influences. We find repose and, above all, are separate from bustling activity and crowds of people. The Hermit therefore stands for an important experience within, through which we can perceive who we are, what we want, and how we can get there. He unites two valuable extremes: the depth of experience and the heights of perception. This card is often wrongly feared by many people.

It is only when its qualities are misunderstood that fears of loneliness and abandonment arise. Some say that The Hermit is a Threshold Guardian, representing an obstacle the Querent, the hero of the piece, must overcome to move on. The person who follows the call of the Hermit willingly will find enrichment through clarity, strength, and the joyful experience of being able to be alone with himself.

The number 9 signifies accomplishment, wisdom, the attainment of goals, as well as the search for truth. The star in the lantern is a 6-pointed star, the Seal of Solomon, a symbol of wisdom. The lantern is the Lamp of Truth containing the star of wisdom. The staff he carries is the patriarch’s staff, a symbol of the narrow path of initiation. The snow at his feet represents the heights of spiritual attainment. He wears the grey cloak of invisibility. The Hermit is also related through a cross sum (the sum of the digits) to The Moon. While The Hermit mostly integrates the lessons of the sunlit world, the Moon stands at the threshold of light and dark and churns the waters of life. In both cases, treasures can be uncovered through contemplation of what is brought forth. In both cases, monsters may be found.

In readings, the Hermit often suggests a need for time alone. This is not a time for socializing; the card indicates, instead, a desire for peace and solitude. Nor is it a time for action, discussion or decisions. It is a time to reflect upon ourselves – a period of reflection when distractions are limited. In times of action and high energy, he stands for the still center that must be created for balance. He can also indicate that withdrawal or retreat is advised for the moment. In addition, the Hermit can represent seeking of all kinds, especially for deeper understanding or the truth of a situation. “Seek, and ye shall find,” we have been told, and so the Hermit stands for guidance as well. We can receive help from wise teachers, and, in turn, help others as we progress.

A potentially dangerous aspect of The Hermit is his retreat, his isolation. We all need to retreat sometimes; retreat and renewal are necessary for growth. But The Hermit may be tempted to completely withdraw from the world, not because the journey is done, but because the dragons of the real are too daunting, or because the trivial pleasures of the cave are too intoxicating. Ensure that you become present with your outer environment after this period of inner reflection.
Opposing cards

Lovers – being in a relationship, sexuality
World – involvement with the world
Two of Cups – making connections, partnerships
Three of Cups – being in a group, being with others
Nine of Cups – sensual pleasure

In the Vikings Tarot, the Hermit is Heimdall living at the edge of Asgard, standing ready with Gjallarhorn watching for the signs of the coming of Ragnarok.
In the X/1999 Tarot version made by CLAMP, The Hermit is Satsuki Yatouji.
In the Mythic Tarot deck, the Hermit is depicted by Cronus.

After long wanderings over a sandy, waterless desert where only serpents lived, I met the Hermit.
He was wrapped in a long cloak, a hood thrown over his head. He held a long staff in one hand and in the other a lighted lantern, though it was broad daylight and the sun was shining.

“The lantern of Hermes Trismegistus”, said the voice, “this is higher knowledge, that inner knowledge which illuminates in a new way even what appears to be already clearly known. This lantern lights up the past, the present and the future for the Hermit, and opens the souls of people and the most intimate recesses. of their hearts.”

“The cloak of Apollonius is the faculty of the wise man by which he isolates himself, even amidst a noisy crowd; it is his skill in hiding his mysteries, even while expressing them, his capacity for silence and his power to act in stillness.
“The staff of the patriarchs is his inner authority, his power, his self-confidence.”
p. 54
The lantern, the cloak and the staff are the three symbols of initiation. They are needed to guide souls past the temptation of illusory fires by the roadside, so that they may go straight to the higher goal. He who receives these three symbols or aspires to obtain them, “strives to enrich himself with all he can acquire, not for himself, but, like God, to delight in the joy of giving”.
“The giving virtue is the basis of an initiate’s life.

“His soul is transformed into ‘a spoiler of all treasures’ so said Zarathustra.
“Initiation unites the human mind with the higher mind by a chain of analogies. This chain is the ladder leading to heaven, dreamed of by the patriarch”. The Symbolism of the Tarot by P D. Ouspensky (1913)