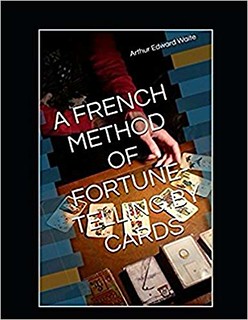 THE methods of divination by cards are sufficiently numerous in France, as they are in other countries, including England. Our own, however, are chiefly of continental origin, while, so far as it is possible to speak with any positive opinion upon so dubious and involved a question, it would appear that the French systems are largely particular to themselves, subject of course to the fact that proceeding in all cases on certain general principles, to that extent they may be said to derive from one another, or at least from a common root. I have selected for inclusion one system which — although it first came into notice at the beginning of the nineteenth century — is likely to be new to my readers.

It is worked with a piquet set of ordinary playing cards, which, as most people will know, consists of the usual picture-pieces and the ace, 10, 9, 8 and 7 of each suit, excluding the lower numbers. The method has appeared, I believe, under more than one auspice, but the imputed author termed himself an Egyptian and claimed to publish his little treatise at Memphis, which, however, stands for Paris. It is not a very full method and is not free from confusions as it was first issued.

In the form which here follows it has been so far rectified and extended from other French sources that it will, I think, serve the purpose as an alternative to the English system given in the previous section. I must explain, however, that those who intend to make use of it should obtain, if possible, a set of French or Swiss cards, in which the picture-pieces appear at full length, instead of with a head at either end, and all the numbers are marked Droit and Renverse at their opposing poles, meaning right side up and reversed Otherwise, an English set may be so marked by the student. Important differences attach to the variations in question, so far as the trump-cards are concerned, as they do indeed in the English method.

Cartomancy is method of fortune-telling or divination using a deck of cards. The most popular form Cartomancy is the Tarot. Etymology From Latin carta, papyrus…

Taromancy or Tarotmancy is the art of divination through the use of Tarot cards. Etymology Derived from the English tarot and Greek manteia ('prophecy') History…

Nggàm is type of divination by interpreting the actions of spiders or crabs. Etymology Derived from the Mambila nggàm ('divination') Origin Nggàm originated among the…