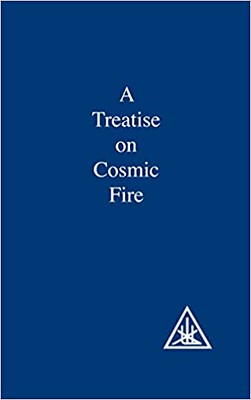 Although this book was one of the first to be written by Alice Bailey in collaboration with the Tibetan, it is probably the most timeless, profound and least understood. “A Treatise on Cosmic Fire” deals with the underlying structure of occult teaching for the present era, with vast cosmic processes reproduced through all areas of life from universe to atom. It is, therefore, no book for the proof-demanding concrete mind, or for those who dabble in the spectacular and the phenomenal. The true student, however, the seriously applied aspirant, will find his mind stimulated and his consciousness expanded.

The book is dedicated to Helena Petrovna Blavatsky, and is said to be “the psychological key to the Cosmic Creation”. Certainly in its revelation of relationship and correspondences throughout the Cosmos, all aspects of life unfolding through consciousness are included, based on the aphorism–“Having pervaded the entire universe with one fragment of Myself, I remain.”

The One Life manifests through all form within the universe as fiery energy; and the three main streams of cosmic energy, differentiated into seven systemic rays, are shown in relation to the three aspects of fire controlling all manifested life: Electric Fire, the Fire of Spirit; Solar Fire, the Fire of Mind; Fire by Friction, the Internal Fires.

A large section of the book is directed to a detailed exposition of Solar Fire, the Fire of Mind, since this is the dominant energy to be understood and controlled during this second solar system. The cosmic Laws operating through the system are shown in relation to the lesser laws of planetary origin and the laws of nature, operating through substance, as distinct from the life and the consciousness of the planet.

In her foreword to the book, the author mentions a five-fold purpose within its teaching; briefly: (a) To provide a compact and skeleton outline of a scheme of cosmology, philosophy and psychology which may serve as a reference and textbook; (b) As an elucidation of the relation between Spirit and Matter, demonstrating as consciousness; (c) To show the coherent development of all that is found within a solar system and to demonstrate that everything evolves; (d) To give practical information about focal points of energy found in the etheric bodies of the Solar Logos, the macrocosm, and of man, the microcosm; (e) To give some information of the place and work of those sentient lives who form the essence of objectivity, and to indicate the nature of the Hierarchies of Existences who form out of their own substance all that is seen and known.

These five objectives, and more, the book encompasses; for the effect in the individual consciousness is such that theories become transcended and the mind begins to experience through contemplative thought what the words on paper reveal to the intelligence. The finite human mind can touch its cosmic origins and its fiery essence when it opens to the three cosmic Laws of Synthesis, of Attraction and of Economy.

The fire of love, the flame of life within the heart, is the touchstone for all intuitive thought, and the alchemist to the dense materiality of gross substance.