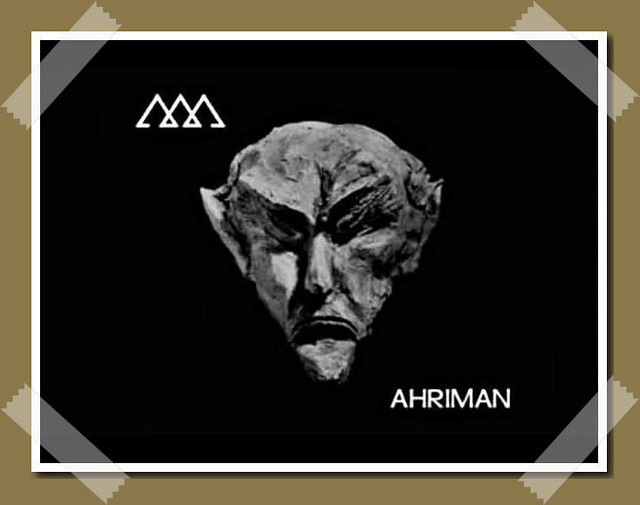 Ahriman
In Zoroastrianism, the Demon of all Demons and the source of all evil. Ahriman originally was a primordial desert spirit who became the personification of evil in Zoroastrianism. As such, he is not immortal, and eventually his reign of terror will be conquered by the forces of good. 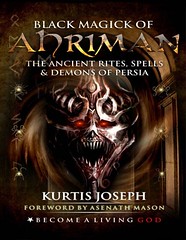 There are different legends about the origins of Ahriman as the evil god. In one, Ahura Mazda, the good god, created the universe and twins called Spenta Mainyu (the spirit of Light, Truth, and Life) and Angra Mainyu (the spirit of Darkness, Deceit and Death). The twins fight for supremacy and their battleground is Earth. Over time, Spenta Mainyu became absorbed into Ahura Mazda, and Angra Mainyu became Ahriman.

The battle between the two forces continues and will last for thousands of years, divided into eras. After the fourth era, three saviors will appear, who will destroy Ahriman and all his forces of evil. In a variation of this legend Ahura Mazda created Angra Mainyu in a moment of doubt when he was making the universe.

According to another legend, Ahriman and Ormazd (a contraction of Ahura Mazda) were twins born to Zuvan, the creator deity. Zurvan declared that the firstborn would be supreme ruler. Ahriman ripped himself out of the womb in order to be first. Zurvan was bound by his promise, but he limited the time that Ahriman could rule. At the end of that, Ormazd would take over and reign in goodness and light. The Earth is presently under the rule of Ahriman; that is why there are drought, famine, war, disease, pestilence, and other ills. To aid him in his rule, Ahriman created 99,999 diseases, and six Archdemons, called Evil Mind, Tyranny, Enmity, Violence, Wrath, and Falsehood. He also created a female Demon named AZ and a dragon. The Archdemons struggle against the six archangel amarahspands, or “Bounteous Immortals.”

Ahriman tried to maim the prophet Zarathustra but failed.

A legend about Ahriman says that he had a son named Zohak, whom he trained to be evil. He told Zohak to kill his own father. He disguised himself, however, and Zohak killed someone he thought was his father. Ahriman, again in disguise, became chef of the palace. Zohak was so impressed with him that he offered to reward him. Ahriman asked only to kiss his shoulders. When he did so, Serpents sprang from the spots. Every time Zohak cut them off, they grew back. Ahriman entered in another disguise, as a doctor, and told Zohak that he had to feed the serpents human brains every day. Zohak complied and became Ahriman’s pride. The son ruled for a thousand years and finally was destroyed.

The Encyclopedia of Demons and Demonology – Written by Rosemary Ellen Guiley -Copyright © 2009 by Visionary Living, Inc.

Ahriman (Angra Mainyu, Anra Mainyu, Aharman) In Persian mythology, the evil spirit, opposed to the good creator god, Ahura Mazda; in the end Ahriman will be destroyed by the forces of good. Though the prophet Zarathustra raised Ahura Mazda to the major rank of god and made Ahriman a lesser deity, in earlier Persian mythology both gods were equals and brothers, sons of the great god of time-space, Zurvan. When the two were conceived, Zurvan decided that whichever came to him first would be made king. When the evil Ahriman heard this in his mother’s womb, he ripped it open, emerged, and approached his father. “Who are you?” Zurvan asked.

“I am your son, Ahura Mazda,” the evil Ahriman replied. “Ahura Mazda is light, and you are black and stinking,” Zurvan declared. While they were speaking, Ahura Mazda came out of his mother’s womb. Zurvan immediately recognized him and made him king. “Did you not vow that to whichever of your sons should come first you would give the kingdom?” Ahriman complained. “You false and wicked one,” Zurvan replied, “the kingdom shall be given to you for nine thousand years, but Ahura Mazda is nevertheless king over you and will triumph after that time.” Ahura Mazda then created the heavens and the earth and all beautiful things, but Ahriman created Demons, snakes, and all evil.

Ahriman is identified with Iblis, the devil in Islamic mythology. In some works Ahriman, rather than the snake of biblical lore, is pictured as an old man offering Adam and Eve the fatal fruit. One early Persian sculpture portrays Ahura Mazda riding on horseback trampling on Ahriman’s snake-covered head.