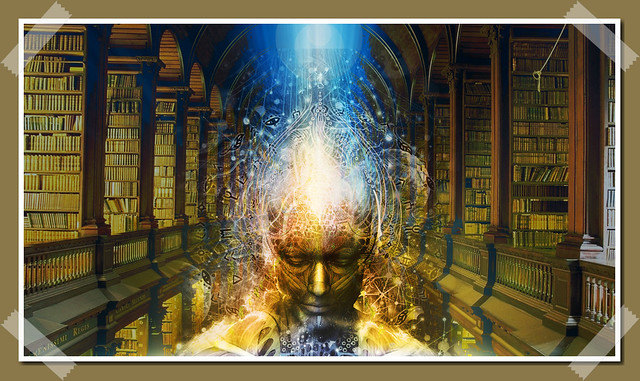 Akasha (akasa) is in eastern mysticism and occultism, the all-pervasive life principle or all-pervasive space of the cosmos. The term akasha is derived from the Sanskrit term for “sky.” The akasha is known by various other names in Western occultism and Magic.

In Hinduism, the akasha is the substance ether, a fifth element and the subtlest of all elements. The akasha permeates everything in the universe and is the vehicle for all life and sound. In yoga, the akasha is one of three universal principles along with prana, the universal life force, and creative mind. These three principles are immanent in all things throughout the universe and are the sources of magical and psychic power. From the akasha comes will , an important component of magic, which enables all manner of feats to be accomplished.

The concept of the akasha was introduced to Western occultism in the early 20th century by Helena P. Blavatsky, founder of the Theosophical society. Blavatsky said the akasha forms the Anima Mundi and constitutes the soul and astral spirit of man. It produces mesmeric, magnetic, and psychic phenomena and is a component in all magical operations of nature. Blavatsky compared the akasha to the “sidereal light” of rosicrucianism, the astral light of Eliphas Levi, and the odyle or odic force of Baron Karl von Reichenbach. It is the equivalent of the Hebrew ruah, the wind, breath, air in motion, or moving spirit, and is identical with the spirit of God moving on the face of the waters. Franz Bardon described the akasha as incomprehensible, non-created, and undefinable. Akasha creates everything and keeps everything in balance—it is the “all in all.”

Everything that ever happens throughout the universe— every thought, sound, emotion, action, and so forth—is recorded permanently upon the akasha. The Akashic Records exist as impressions in the Astral Plane and can be accessed by magical means, through Clairvoyance and by Astral Travel. The Akashic Records are consulted for information about past lives, lost civilizations, and other planes of existence. Spiritual beings—perceived by some as Angels—provide assistance in accessing the records.

The American trance psychic Edgar Cayce frequently consulted the Akashic Records to obtain past-life information that explained clients’ health, personal, and marital problems in their current lives. Cayce sometimes referred to the Akashic Records as “The Universal Memory of Nature” and “The Book of Life.” The astral repository was like a great temple filled with books, he said.

Rudolph Steiner called the records the Akashic Chronicle. He consulted them to produce his detailed descriptions of the lost civilizations of Atlantis and Lemuria. See also Tattvas.