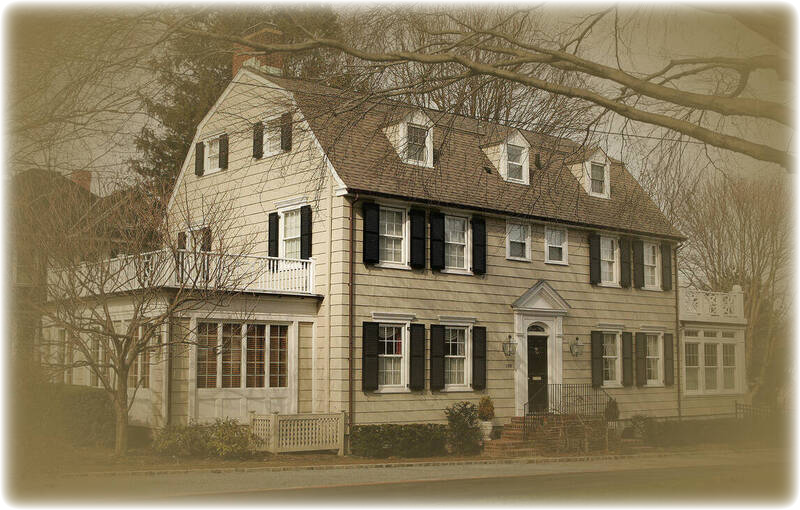 The Amityville haunting is a particularly famous haunted-house story, thanks to its depiction in popular books and movies. However, there is much doubt regarding whether this haunting took place as depicted or even at all. If accounts are true, the haunting occurred in 1975 in Amityville, New York, in a three-story house where a gruesome murder had been committed the previous year.

The haunting supposedly began shortly after Kathy and George Lutz and their three children moved into this home. At first they experienced poltergeist activity that included banging doors and windows and mysterious noises. Then the activity apparently escalated to include physical contact; some members of the Lutz family claimed to have been pushed, pinched, and beaten, and Kathy Lutz reported that on one occasion she was levitated off a bed. In addition, the family said that green slime had dripped from a ceiling and that insects would gather in certain areas of the house for no discernable reason. Just twenty-eight days after moving into the house, the Lutzes abandoned it. They then called Ed and Lorraine Warren from Connecticut, who claimed to be able to contact the spirits of the dead. The Warrens conducted a séance and later said that the house was indeed possessed by some kind of evil spirit.

This was exactly the claim that Ronald DeFeo Jr., who had murdered his parents and four siblings inside the house, had made at his trial. DeFeo had pleaded insanity, insisting that a ghost had forced him to commit the murders. A jury, however, believed the motivation suggested by the prosecutor: that DeFeo simply wanted his parents’ life insurance money. As a result, DeFeo was convicted on six counts of second-degree murder.

Those who question whether the house was actually haunted point out that George and Kathy Lutz not only knew DeFeo’s story, but they had also discussed it with DeFeo’s attorney, William Weber. In 1979 Weber, believing this discussion had inspired the Lutzes to fake the haunting in order to profit from it, sued for a portion of the money they earned from media appearances, a book deal, and a movie deal. The Warrens were also accused of being involved in the scam since the couple had profited by working as consultants to the producers of one of the many films about the incident and by making numerous public appearances to promote the film.

The next residents of the Amityville house also sued the Lutzes and both the publisher and author of the book about the haunting, saying that the Lutzes had damaged their quality of life by turning their new home into a tourist attraction.

These new residents had experienced no poltergeist activity at all, so they believed that the Amityville haunting had been a hoax. Other people came forward to support this view, pointing out inconsistencies in the Lutzes’ story. For example, the Lutzes had said that after fleeing the house on a particular date, they never went back, but a neighbor revealed that the Lutzes had held a garage sale at the house the day after they “left.” In addition, several psychic researchers who had investigated the haunting could find no proof that any poltergeist activity had actually taken place there. Eventually William Weber won his lawsuit, and the new owners received a settlement in exchange for dropping their legal action.

Amityville case Controversial and sensational Haunting of a house in Amityville, Long Island, New York, in the 1970s. The case has been the subject of…

V-Metro this week visited three ‘ghost houses’ in Katutura, Windhoek North and Khomasdal just to find what really happens in those houses. In Katutura, just…

Just beyond the shadows, in the twilight space between life and death, lies the place where ghosts, demons, and otherworldly horrors tread. For most people,…

Ham House Elegant house in Dubuque, Iowa, now a museum, reported to be haunted and to have paranormal and Poltergeist phenomena. The house has an…