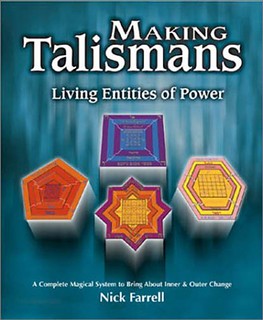 amulets and talismans Threatened by hunger, natural elements, beasts of prey, and unknown forces, Africans—like many other people around the world—enlisted the aid of magic or supernatural powers to overcome forces that could cause harm. Amulets and talismans are objects believed to have special powers to protect or bring good luck. Amulets are magical charms used for protection and to ward off evil.

Some amulets were believed to have broad powers, providing general protection. Others were amulets and talismans used for specific purposes, such as helping hunters achieve success. Talismans are general good luck charms. Amulets can be either natural or crafted by hand. Natural amulets are of many kinds: the feathers of birds; animal hooves, horns, teeth, and claws; bones; stones; plants and grasses.

For example, the teeth of lions and crocodiles were regarded as powerful medicine against wild beasts, especially if a hunter wore them and returned from the hunt successfully. Crafted amulets include carved figures of animals, beaded ornaments, and jewelry such as bracelets, anklets, and rings. Charms are sometimes carried in a pouch called a mojo bag in some cultures, a wanga (oanga) bag in others.

The bag is kept hidden. The belief is that if another person touches someone’s charm, the luck will go away. Charms that seemed to work were widely copied and eventually became standardized into symbolic magical devices. The following list gives some of the most common charms and their uses: Charm Use animal carving ensure a good hunt animal teeth protect against wild animals anklet protect a child bamboo whistle defend against witchcraft bundle of sticks guard the home copper ring prevent snakebites goatskin pouch ward off illness iron bracelet promote fertility In North Africa, where Arabic influences are strong and the primary religion is Islam, the most important good luck charm is the khamsa—a representation of a hand.

The hand symbolizes the hand of Fatima, the daughter of the prophet Muhammad, who is seen as a protective figure. The hand symbolizes strength, power, and generosity. Its five fingers represent the five principles of Islam; according to tradition, the number 5 has magical powers of protection against the “Evil Eye”—a malicious stare that supposedly could bring bad luck, illness, or even death. Many Moroccans, among other people, wear silver hand pendants around their necks, hang embroidered hands in their homes, and paint hand symbols on the outside of buildings.

Frequently the palm of the hand is engraved with patterns; often it contains a symbol for an eye. The use of silver for khamsa charms is related to the belief that silver has magical qualities and represents purity. Many Berber women paint designs on their hands with henna (a temporary dye) or even permanently tattoo them. These designs are believed to ward off evil spirits and provide protection from bad luck and illness. At birth, a Berber girl is given a necklace—an amulet with compartments containing herbs and seeds that are believed to have magical powers to protect the newborn.

For those who wish to master the art of magical achievement, there are numerous occult aids which may be of value. Some of these tools…

The Pentagram, Star of David, Crucifix, rabbit’s foot, or four-leaf clover…they all provide feelings of comfort and protection, intended to attract good while dispelling evil.…