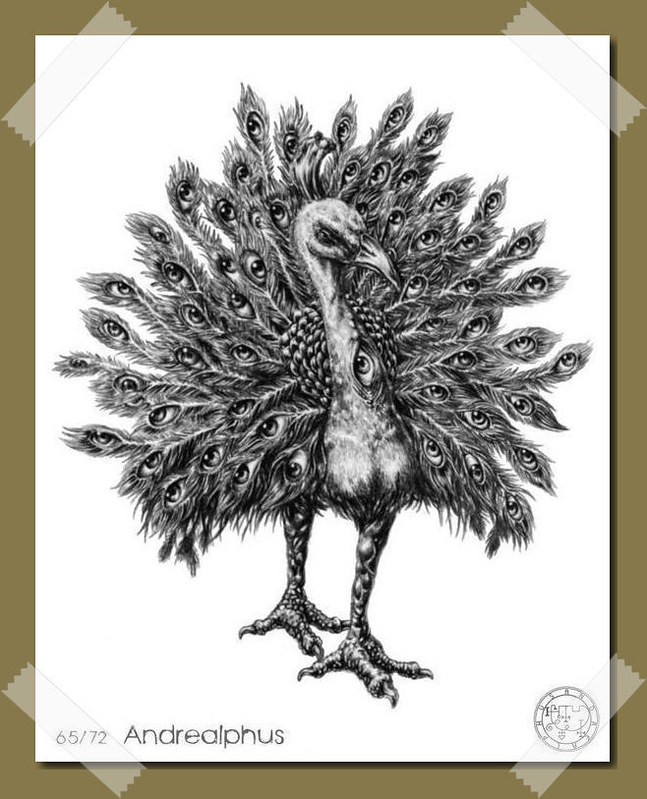 Andrealphus is a Fallen Angel and 65th of the 72 Spirits of Solomon. Andrealphus is a mighty marquis, who rules 30 Legions. He first appears as a noisy peacock and then as a human. He can transform people into birds and make them very cunning. He teaches perfect geometry and everything pertaining to measurements, as well as astronomy.

“Andrealphus is a great marquesse, appearing as a peacocke, he raiseth great noises,and in humane shape perfectlie teacheth geometrie, and all things belonging toadmeasurements, he maketh a man to be a subtill disputer, and cunning inastronomie, and transformeth a man into the likenes of a bird, and there are under him thirtie legions.”
(Scot, Discoverie of Witchcraft, page 224).

We know that this Demon is very vain and proud, since he comes in the form of apeacock. The animal forms assumed by the Demons express their true natures andpersonalities in a symbolic way. “Admeasurement” is an old word for practicalmathematics. It was also known as mensuration. By astronomy the Demon meanspractical astrology, the actual casting and interpretation of astrological charts. It isunlikely that this Demon could physically change a human being into the shape of abird, but more probable that he merely cast a glamour over the victim so that hethought himself to be a bird, and saw himself as a bird.

From “The Goetia: The Lesser Key of Solomon the King” (1904) Written by Samuel MacGregor Liddel Mathers

ANDREALPHUS. – The Sixty-fifth Spirit is Andrealphus. He is a Mighty Marquis, appearing at first in the form of a Peacock, with great Noises.
But after a time he putteth on Human shape. He can teach Geometry perfectly. He maketh Men very subtle therein; and in all Things pertaining unto Mensuration or Astronomy. He can transform a Man into the Likeness of a Bird. He governeth 30 Legions of Infernal Spirits, and his Seal is this, etc.

From the Luciferian Goetia ( 2007 ) – Written by Michael Ford
“Andrealphus is the Sixty-fifth Spirit who is a mighty Marquis, who comes forth as a beast or jester spirit who is like a Peacock, who speaks in tongues with two voices (high and low) at the same instance. He is a Spirit of the Infernal Sabbat, who shall carry thee forth in Astral and Dreaming Flesh in the form of a Bird. Andrealphus teaches astronomy and such sciences.”

Andrealphus [Androalphus] is a great marquesse, appearing as a pecocke, he raiseth great noises, and in humane shape perfectlie teacheth geometrie, and all things belonging to admeasurements, he maketh a man to be a subtill disputer, and cunning in astronomie, and transformeth a man into the likenes of a bird, and there are under him thirtie legions.

Note from Occult World : The Demon Androalphus has no depiction in the “Dictionnaire Infernal”