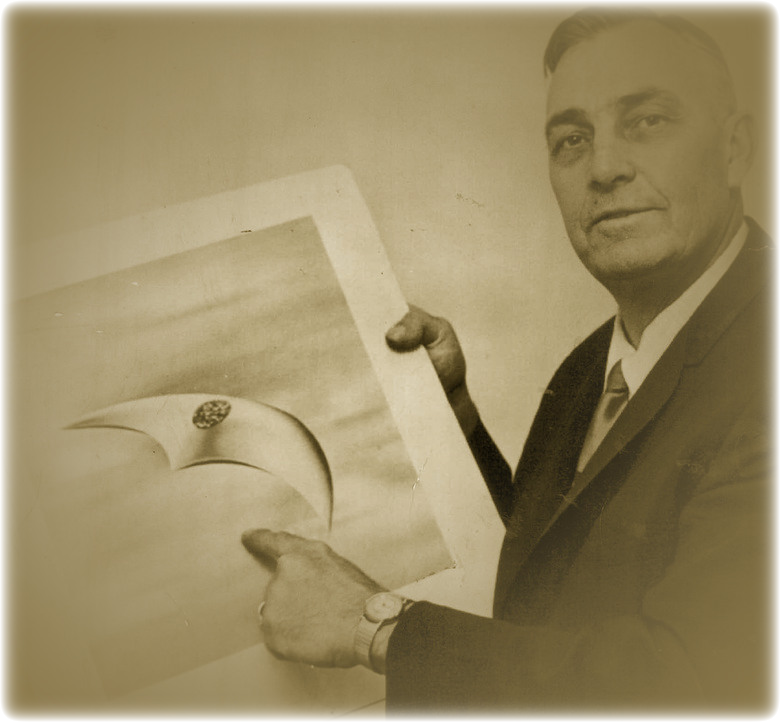 Kenneth Arnold(1915–ca. 1984) Private pilot Kenneth Arnold is thought to be the first person to use the term flying saucers to refer to UFOs. In 1947 Arnold reported seeing nine mysterious objects “flying like a saucer would if you skipped it across the water,” and when this report was published in newspapers throughout the world, some reporters misquoted Arnold as saying he had seen “flying saucers.” After this, hundreds of people began claiming that they too had seen flying saucers and described these objects as saucer shaped, though Arnold had not said they were shaped this way. In fact, though numerous reports over the years quoted Arnold as saying that eight of the objects were disc shaped and one was crescent shaped, Arnold later insisted that these reports were wrong—and indeed, a drawing that he provided to the U.S. Air Force shortly after the event indicates that the objects he saw resembled a hawk’s outstretched wings, though the front edge was a smooth curve.

Arnold’s sighting occurred on June 24, 1947, while he was flying his own small plane near Mount Rainier, Washington; at the time, he was searching for the wreckage of a missing military airplane. Just before 3:00 P.M. he saw a flash of blue light pass in front of his airplane. When he looked north, the direction the light had come from, he saw nine seemingly metallic objects, flying in what he considered to be a formation, about 23 miles (37km) away. He estimated that the wingspan of each craft was at least 100 feet (30.5m) across, and that they were moving at a speed of nearly 1,400 miles per hour (2,253kph).

Arnold reported watching these objects for approximately two minutes, as they moved southward along the Cascade Mountain Range into Oregon. Shortly thereafter he landed in Yakima, Washington, to report the incident to an official with the federal agency known as the Civil Aeronautics Administration. Arnold later mentioned the incident to a journalist, and the public uproar over the sighting began.

At the time he made his report, Arnold did not think they were alien spaceships. In fact, he was sure that the objects were some kind of experimental U.S. military craft. The government, however, denied having any aircraft in the area and declared that Arnold had mistaken a cloud formation for UFOs. Arnold refused to accept this explanation, and by 1950 he had decided that it was possible, perhaps even likely, that the objects were extraterrestrial. In 1952 he coauthored, with his friend Raymond A. Palmer, a book about his experience. By this time he had adopted the popular term for the objects he had seen and therefore titled the book The Coming of the Saucers.

By the time he and Palmer published their book, Arnold had reported seeing the UFOs three more times, all in roughly the same area as the first sighting. Eight other pilots made similar reports. However, the pilot of a commercial airliner that had been approximately 10 miles (16km) away from Arnold when he made his first sighting insisted there had been no other objects in the area. Sceptics consequently suggested that Arnold had imagined the objects or had lied about seeing them. As a result of such accusations, Arnold was sometimes ridiculed because of his sightings, and on at least one occasion he expressed regret at having ever reported the UFOs in the first place.

“flying saucer” An expression commonly used to describe an unexplained aerial phenomenon. The words do not always convey a just conception, since much of what…

Published since 1948, Fate magazine is the foremost periodical dedicated to the paranormal. Issued monthly, Fate publishes articles on subjects as diverse as cryptozoology, faith…

Palmer, Raymond A. (1910–1977) During the 1950s editor and author Raymond A. Palmer was responsible for numerous stories related to paranormal phenomena and was a…

Begun in 1952, Project Blue Book was the last in a series of U.S. Air Force investigations into the nature of UFOs. UFO enthusiasts say,…

Named for its leader, physicist H.P. Robertson, who worked for the Central Intelligence Agency (CIA) and the Defense Department, the Robertson Panel consisted of scientists…